The apartment is doing well," Sigmund Freud’s youngest daughter Anna had written to her father of their home at Berggasse 19 in Vienna’s affluent 9th district in a letter sent in 1910.

Transformed into the Sigmund Freud Museum by Anna in 1971, the address was home to the founder of psychoanalysis and his family for 47 years, between 1891 and 1938, before Nazi persecution drove them to seek refuge in Britain, where Freud lived out the last year of his life in London. Although Freud’s impressions of Vienna were inconsistent at best—“I hate Vienna," he wrote in 1900 to his friend William Fliess, “…I draw fresh strength whenever I remove my feet from the soil of the city which is my home,"—his love for his house and workplace at Berggasse 19 is known to have been a constant.

The apartment now houses original furnishings; the waiting room is preserved faithfully, along with Freud’s walking stick, a golf hat, a weather-worn leather travel bag, and a chequered blanket at the entrance, encased in glass after a visitor made off with one of his hats. There’s also a selection from Freud’s private collection of antiques, handwritten and translated correspondence and first editions of his works. These provide an illuminating insight into the everyday life of a mind that captivated 20th century psychology and culture.

While his famous rug-swathed couch resides in the Freud Museum in Hampstead, London, along with many of the original furnishings from the Berggasse house, what remains in Vienna are the priceless footprints of the professor and doctor. There is his custom-made study chair with a rather rigid back, and the rest of the dwelling converted into archives of his private life. 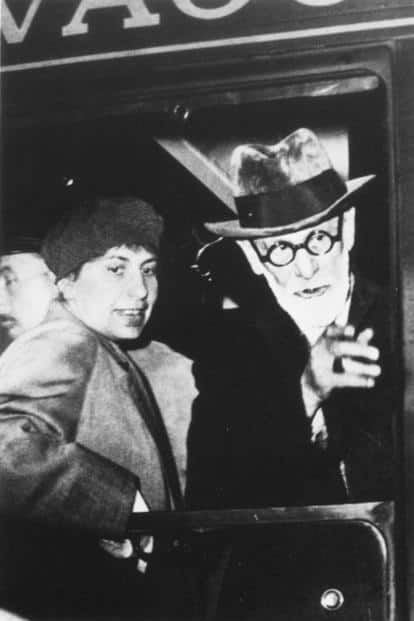 Freud with his daughter Anna at the time of their emigration in 1938. Photo: Alamy

I rang the bell to be let in, much like the professor’s troubled patients a century ago. And as I made my way through the apartment, the life and thoughts of this influential and extraordinary mind peeled away slowly to reveal the everyday, intimate details of this family living in a historical time. Father of six, Sigmund Freud spent nearly half a century as a tenant at Berggasse 19, together with his wife Martha, his children and his sister-in-law Minna Bernays, and a couple of helps. Numerous letters, notes, quotations from theoretical writings, and visual documentations of the Freuds’ personal life illustrate the extent to which the family and home influenced the early development of the new science of the unconscious.

The collection of letters that the professor-doctor wrote to his wife offers glimpses of his life and personality. Of an ordinary day after a storm, he writes: “… No news otherwise. Yesterday I did my writing in the evening and hope to do the same today. Business middling: today it would be more profitable to be a glazier than a doctor."

Despite his ambivalence about Vienna and frequent, wide travel, Freud missed being at Berggasse 19. From Florence, he sent a note that said: “I confess that I often think amidst all this beauty that it is most beautiful at home."