Like a fan prone to hyperbole, Lalita Iyerwith her 'Sridevi: Queen of Hearts'is revisiting her favourite diva after the brouhaha over her untimely death has fallen silent

Sridevi would have turned 55 in August. It is opportune to release a book months after her tragic death, but that excludes the possibility of an immersive biography. In Lalita Iyer’s Sridevi: Queen Of Hearts, there is lot that a Hindi film fan can relate to, or simply remember knowing, though it is far from a fully fleshed-out biography.

Every Indian film lover will have a favourite Sridevi moment or song; mine is when I watched a Friday 9am show of English Vinglish, her 2012 comeback after almost two decades. An almost fully occupied theatre erupted when Shashi Godbole (Sridevi) gave a climactic speech in English. Although the film itself was run-of-the-mill, I was starstruck—all over again. 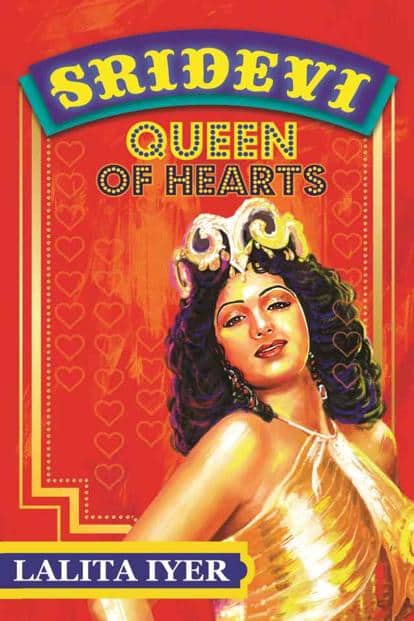 But Iyer has the additional burden of being Tamil—inheriting the deification of Sridevi’s long and varied Tamil run and the disdain for her Bollywood conformity (the “show-sha") from her mother. Iyer reminds us of the versatility and iridescent quality of Sridevi’s stardom. The book delves into some rarely observed facets of the actor, like the way she transcended language and appealed to emotions on both sides of the Vindhyas, how she involved every part of her body in her roles. Some of these observations are overemphasised. Like a fan prone to hyperbole, Iyer is revisiting her favourite diva after the brouhaha over her untimely death has fallen silent.

Most film biographies in India are anecdotal and excessively dependent on news reports or interviews already published. This book is not an exception. The only way to write authoritatively or memorably about a person with such enduring mass appeal as Sridevi is to invent a style or structure not attempted before. The subject’s well-known distance from the media makes the job of a biographer doubly difficult. There are no voices of the people closest to Sridevi or from her past in Iyer’s book. It isn’t a critical dissection of her significance in the pop culture legions that emanate from Mumbai’s film industry. It is a meticulous and efficient aggregator of quotes from books and newspapers, many from the avalanche of nostalgic accounts in the media after her death in February.

Sridevi’s obsession with perfecting her dance moves and attention to detail are famous, and Iyer gets all that in, including her love-hate relationship with the famous choreographer of the 1980s and 1990s, Saroj Khan. There are insights into some acute questions. Did Sridevi grow up too soon, having played grand-daughter or daughter to south-Indian film gods like N.T. Rama Rao and A. Nageswara Rao only a few years before she played their lover? Did she understand, at 12, her role of a woman who avenges rejection from a man by marrying his father in K. Balachander’s Moondru Mudichu?

The most interesting bits are Sridevi’s early years in the Hindi film industry, during which her mother continued with the great Tamil tradition of being the overbearing amma, and her lifelong struggle with speaking Hindi. Sridevi deserves more books, for sure—with her death, they’re the closest we can get to a Sridevi hit.