In an age when Mahatma Gandhi, the man, is indistinguishable from his countless visual representations, and we wonder whether our visual culture can sustain any more interpretations—be it through cartoons, paintings, postcards, stamps or currency notes—it is a remarkable occasion when a newly discovered and rare pencil portrait of the man comes to light. Combine that with a collection of his handwritten letters, and it’s a field day for Gandhi enthusiasts.

A collection of six letters by Gandhi and a pencil portrait drawn from life by John Henry Amshewitz, and inscribed by Bapu himself, is up for auction at Sotheby’s London sale on 11 July. One can bid online from anywhere in the world by registering 24 hours prior to the sale. The portrait is estimated at £8,000-12,000 (around Rs7-10 lakh), while the letters, grouped in three lots, have a combined estimate of £23,000-33,000 (around Rs19-28 lakh). 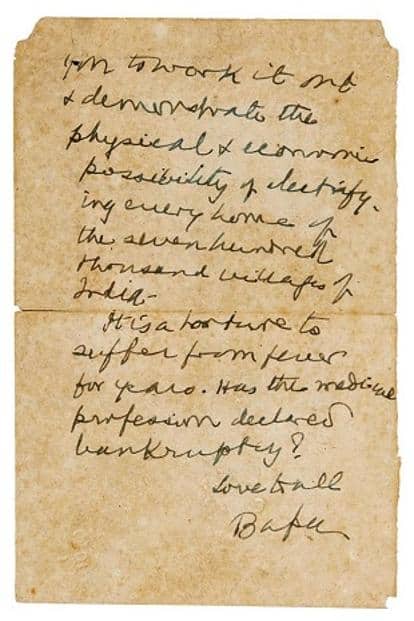 A letter by Gandhi. Photo: Sotheby’s

Gabriel Heaton from Sotheby’s, a specialist in historical manuscripts who is looking after the sale, says over the phone: “A completely unknown pencil portrait of Gandhi is extremely rare…was excited when I first saw it as it captures him beautifully at work."

When Gandhi’s grandnephew, Kanu Gandhi, photographed him during the last 10 years of his life, he had agreed on two conditions: There would be no flash and he wouldn’t pose. If such were the clauses for photography, a formal sitting for a portrait was out of the question. Amshewitz drew the portrait on similar terms, while Gandhi was at work, a fact recorded by Amshewitz’s wife in a book about his paintings, confirms Heaton. It was drawn during Gandhi’s visit to London for the Round Table Conference in 1931.

Amshewitz, a little-known, British-born South African artist, was a protégé of John Singer Sargent, the American artist known for his larger-than-life portraits. Amshewitz, more modest in scope and output, also painted an oil portrait of Gandhi in 1931 that lies somewhere in the 14km of shelves that make up India Office Records in the basement of British Library in London.

The portrait up for auction is characterized by dexterous pencil work, with swathes of white space for the diaphanous shawl. It is almost a visual metaphor for Gandhi’s conviction equating work with worship. Seated in his usual posture, with both legs crossed on one side, we see him writing with deep concentration. Gandhi would inscribe the drawing before leaving London: “Truth is god—M.K. Gandhi, 4/12/31". It is undoubtedly a refreshing work, which proves that Gandhi as a subject can still work as a powerful image.

The portrait was given to a British resident closely associated with Kingsley Hall, a community centre in East London that was Gandhi’s accommodation during the trip. And it was with her family until now.

The letters, on the other hand, are being put up for sale by the Bose Legacy Foundation, which manages the archive of the Bose brothers, Sarat and Subhas. The collection comprises pleasantries to the family of Sarat Chandra Bose and a somewhat admonishing letter to Sarat himself.

In the letter he wrote on the eve of Partition, he urges Sarat Chandra Bose to drop the idea of a unified Bengal and to “give up the struggle for the unity of Bengal and cease to disturb the atmosphere that has been created for partition of Bengal".

In 2012, the Union government paid $1.1million (around Rs7 crore)for a collection of Gandhi’s letters. It remains to be seen if it will do the same this time round.