Sex and the novel

From gender identity to issues of sexual repression, these graphic novelists focus on sex to raise pertinent questions about relationships

Writing about sex is a lot like filming it; things can get tawdry very quickly in the hands of an amateur. One would assume graphic novelists have an edge here, because images can say so much more than words do, without the clumsiness that tends to creep into a sentence when one is describing intercourse. This isn’t always the case though, because the line between erotica and pornography is a delicate one. Luckily, the form does empower novelists who focus on sex to make another point, one that takes them away from the simpler realm of erotica and into the more abstract form that has long been occupied by the novel of ideas.

Sex for Canadian artist Chester Brown, for instance, is a clinical act, one that reveals itself in simple thrusts and depictions of genitalia that are almost primitive. His book, Paying For It, documents a period of his life where he paid for sexual encounters to figure out if he could continue doing so without the need for a relationship that went any deeper. It comes across as naive, of course, when one reads it in the developing world or any part of the world where human trafficking is a clear and present evil, but Brown does manage to raise a few pertinent questions—with attempts at answers in his lengthy footnotes and appendices—about why we look at prostitution the way we do, whether or not we label its victims incorrectly, and why a few amendments to the law, at least in his country, may not be such a bad thing at all.

Julie Maroh deploys graphic depictions of sex in a more traditional manner for Blue Is the Warmest Colour, her book that spawned the Cannes winning film (which was, ironically, attacked by the author for gratuitous sex scenes that she referred to as pornography). Maroh does show a fair amount of sex between Clementine and her older lover Emma, but these take a back seat to the heart of the story, which is one of heartache and coming to terms with one’s sexuality. It’s a powerful work and, for many, far more poignant than the movie was. 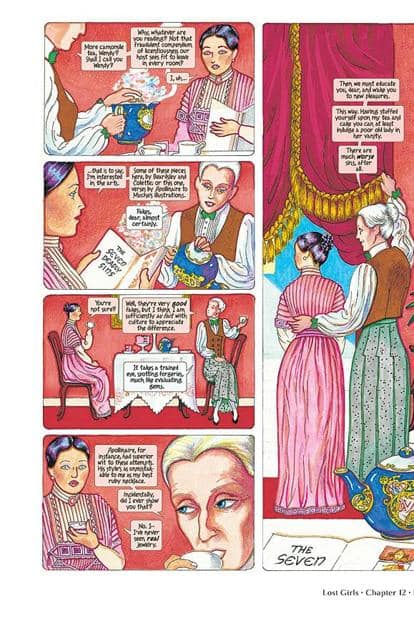 Some of the finest work in the format comes when a great writer finds an equally innovative illustrator to work with. And no list of great writers across genres can be complete without the imposing presence of Alan Moore who, with his partner Melinda Gebbie (now his wife), turned the idea of sex on its head by marrying erotica with iconic characters drawn from children’s literature. The three-volume Lost Girls focuses on Alice from Wonderland, Dorothy from Oz and Wendy from Neverland, but not in the way one would expect. Moore and Gebbie give us grown-up versions of these girls by documenting their respective sexual exploits at a hotel. What it encapsulates, in the process, is a concise history of British modernism, while commenting upon the West’s history of sexual repression. To give you a taste of what to expect, the grown-up Alice is now a lesbian, Dorothy is a peasant, while Wendy is a frustrated wife. And yes, there is also a ménage à trois.

Another unusual partnership that yields riches, in the form of the series Sex Criminals, is between writer Matt Fraction and illustrator Chip Zdarsky. It isn’t just about sex either, but does focus on the moment of orgasm because its protagonists, Jonathan and Suzie, realize that their specific climaxes have the ability to stop time, allowing them to then roam this still world for a few minutes. Naturally, their specific talent allows them to get away with all kinds of things, like, for instance, a few bank robberies. The writing is extremely witty, with jokes about sex strewn quite liberally across its pages, and Zdarsky uses colour like few people in his line of work do.

The nicest thing about Sex Criminals is that it treats the topic of sex the way more of us ought to—with honesty, affection and a distinct lack of the prudishness that usually accompanies any reference to it in our country. It really ought to be made compulsory reading for young adults across India.