Textile patterns and weaves love to travel. We look at seven iconic Indian motifs that have captured the sartorial imagination of the world

Through artistry and manufacturing know-how, the subcontinent dominated the global textile trade from antiquity until the industrial revolution of the late 19th century. The aesthetic themes that originated in India have endured, shaping the design vocabularies of countries across the world, from Japanese kimonos to French Provencal and psychedelic hippy style.

As an American textile designer with a keen interest in heritage textiles, this story unfolded for me as I studied the decorative arts in India while working for the government here in the early 1980s. I continued researching museum archives such as the DeWitt Wallace Decorative Arts Museum in Virginia, the Victoria and Albert Museum in London and the Musée des Arts décoratifs in Paris. Immersing myself in these public and private textile collections, I noticed that certain motifs kept reappearing through the centuries, sometimes changing slowly over time as fashion or technology advanced. I saw how designs and colour combinations created in India had captured the imaginations of diverse foreign markets, taking root within those cultures and growing to become iconic styles there.

If we look, we find examples of Indian-origin designs that have been assimilated into local traditions and folklore around the world. Indonesian Ikat and batik owe a debt to India that is both aesthetic and technical. Japanese Sarasa fabrics are direct descendants of the Indian calico brought by Portuguese traders in the 16th century. Europe is full of examples, from the Scottish town of Paisley, made famous by copying Kashmiri shawls, to English and French chintz florals (known in France as Indiennes), and the French Provencal style imitates desi block-prints brought to France along the Silk Road by Armenian merchants.

This is a story of commercial, technical and artistic success. The mercantile and mechanical successes may have been destroyed by the industrial revolution and the British Raj, but the aesthetic impact remains to this day, and is illustrated here with seven examples of India’s enduring design legacy.

Paisley became a fashion craze when Kashmiri artisans turned the stylized pine-cone motifs from ancient Persia into fine pashmina shawls. By the late 18th century, ladies in Europe had taken to these shawls and mills began to produce them using the newly invented jacquard loom that replaced the handiwork of the weaver.

A portrait of Madame Rivière that features a shawl with bhutia Paisley motifs, dated 1805-06.

Such was the volume produced in one Scottish town that we now know this design by the name of the place, Paisley. Popular today among Ivy League WASPS (White Anglo-Saxon Protestants), this cloth actually originated in India. The name itself is Indo-Persian, meaning “milk and sugar", a reference to the textural, puckering effect of the fabric’s stripes. Its first use in the US was to replace the heavy flannels in men’s suits—it was more compatible with the southern heat. That’s how the classic blue and white striped American summer suit was born.

The Madras Plaid became a symbol of American privilege.

What does a rickshaw- puller in Kolkata have in common with a Wall Street banker at a cocktail party? They both might be wearing what is known as Madras Plaid. The legend of this cotton checked fabric from south India has roots in New England’s best schools. In 1718, the East India Company governor of Madras, Elihu Yale, sent a shipment of goods, including cloth, to a school at his Connecticut home as a gift. This school was later named Yale University, where, along with Harvard and other elite schools in the 1920s, the Madras Plaid became a symbol of American privilege.

Ikat is a rare way of decorating textiles by tie-dyeing patterns on to yarns before weaving.

Ikat is a rare way of decorating textiles by tie-dyeing patterns on to yarns before weaving, resulting in distinctive “flame"-like edges on the motifs of the finished cloth. Scholars believe the technique emerged thousands of years ago in several locations independently, and India was a place that mastered the art like none other. As early as the 12th century, the famous “Patola" double Ikat was being produced in Patan, Gujarat, and in the 18th century the French were making a type of silk Ikat by printing the warp yarns.

Through the centuries, some designs evolved into the floral patterns we associate today with English chintz.

Kalamkari, the painted and block-printed floral cottons of the Coromandel Coast, awed Europe when they arrived in the 17th century. The demand for them upset the balance of trade and European printers eventually replicated the design and replaced the kalam (hand-held pen) and wooden block with industrial processes. Through the centuries, some designs evolved into the floral patterns we associate today with English chintz. Indian indigo resist-dyed cotton was famous throughout the ancient world, from Rome to China. The oldest evidence of this cloth comes from Mohenjo Daro in Sindh, where a statue from 2500-1500 BC was unearthed—of a king-priest wearing a resist-dyed shawl. Textile fragments discovered in Egypt reveal a flourishing trade with Gujarat during the Mamluk Sultanate (1250–1517). Today commonly known by its Indonesian name, batik, the essential resist-dyeing process remained a primary form of printing until the 19th century, when it was replaced by industrial machines. 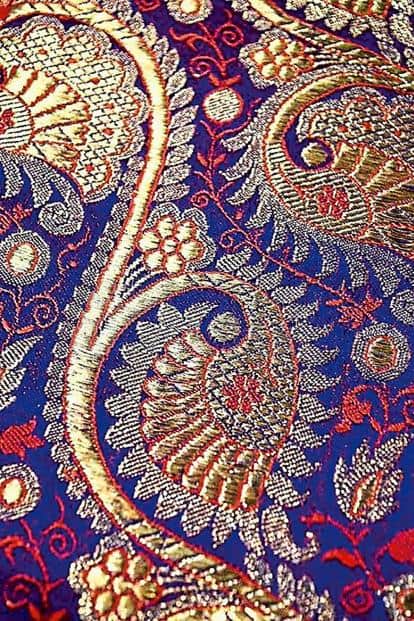 Archaeological finds in Harappa show that silk manufacturing existed in the Indus Valley civilization as early as 2450 BC, predating silk-making in China. The legendary khinkhwab cloth, associated nowadays with Varanasi, employed a technique of silk twisted with gold or silver. It had patrons among the rich and was exported to Babylon long before the Maurya empire (322-185 BC)—and contributed greatly to the idea of India as a land of opulence and riches.