Sense of a life

Why memoirs can be more evocative, and hard-hitting, in the visual form

Biographies or memoirs are tricky things. Too critical, and they lose their reason for existence; too accommodating, and they dissolve into hagiography. This is what makes graphic novels interesting when they are used to try and make sense of a life.

It is not the story that matters, then, as much as how it is told.

Take Pablo Picasso, for instance, that giant of the 20th century who continues to be a worthy object of affection for new critics, academics and historians alike. Of all the tomes that document his admittedly colourful story, Pablo, by writer Julie Birmant and artist Clément Oubrerie, is easily one of the most engaging, simply because it happens to be a thing of beauty itself. Following the impoverished 19-year-old Picasso living in bohemian Montmartre as he negotiates jealously, rivalry and a turbulent relationship with his muse, this gorgeous French volume is now available in English, full of evocative drawings of Paris, its down-and-out residents, and the artist’s early work. This isn’t to say it is just a pretty book; the writing goes a long way in explaining how Picasso’s obsessions as well as influences helped him become the artist he would grow up to be.

Art Spiegelman chooses a less famous but no less important subject: his father Vladek, a survivor of Auschwitz. When Maus first appeared in 1986, there was nothing like it on bookshelves anywhere. The fact that it continues to occupy a world of its own is testament not just to Spiegelman’s artistic vision, but to his father’s life-altering experience of the Holocaust which, ironically, cuts closer to the bone now than at any point in our own time. By depicting Germans as cats, Jews as mice and Poles as pigs, among other things, Spiegelman allows his work to operate at two levels. It is the juxtaposition between the characters’ visual docility and the very real acts of oppression committed by Germans on the Jews that gives the book its unsettling power. Is Maus a biography in the true sense? Probably not. At its heart lies the story of one man though, and the consequences of a single catastrophe that has cascading effects on the rest of his family’s history. ‘The Thrilling Adventures Of Lovelace And Babbage’.

There are biographical elements in Sydney Padua’s The Thrilling Adventures Of Lovelace And Babbage: The (Mostly) True Story Of The First Computer, but they pale in comparison with the magical flights of fantasy elaborately constructed by the English artist and writer. The big question she asks here is “What if?" What if the inventor Charles Babbage, who created machines that eventually gave birth to our computers, had completed his “Analytical Engine"? What if his friend and collaborator Ada Lovelace, daughter of Lord Byron and the world’s first computer programmer had helped him accomplish this task? What if the two of them had then used this marvellous contraption to fight crime? What if they had had run-ins with Victorian celebrities like Queen Victoria, the Duke of Wellington or Charles Dickens? The answers lie here and, as a bonus, a lot of them happen to be very funny.

Pierre-François Beauchard (he prefers the simpler David B.) spent seven years publishing his six-volume epic autobiography l’Ascension du Haut Mal in France, after which it was translated into English and given the simpler title Epileptic. It dwells upon the artist’s relationship with his brother, who suffers from the disease, but also uses it as a means to define how the lives of everyone in his orbit are altered drastically. As the disease takes complete control over the brother’s life, it also pushes the artist into the realms of myth as a defence mechanism with which he learns to make sense of his unfair world. This is a memoir of two brothers locked in huge individual battles, sometimes with each other, at other times with their tragic destinies. It leaves us wondering who the real victim is—the 11-year-old whose life mysteriously changes forever, or the devastated adults he leaves in his wake? 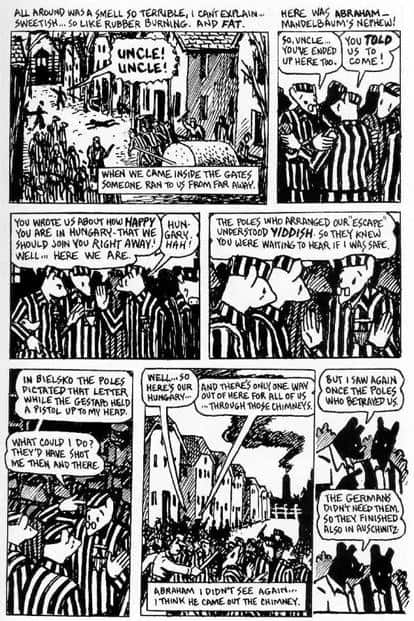 This is not an easy story, by any means, but it is one that deserves praise for its honesty and integrity, qualities that take any biography or memoir and turn them into glistening works of art.