A new book reveals the sheer scale of research that went into 'Shatranj Ke Khilari', set in a milieu less familiar to Ray than Bengal

At its core, the greatness of Satyajit Ray’s films lies in his ability to unveil before us vignettes of “the human condition" through stories located in Bengal—the universe in a microcosm. But we tend to overlook, at the cost of our own learning, the nanoscale detail of each of his works, what makes up the microcosm in other words, every thread in the fabric. An important part of this is research. Bengal he knew well, less so Lucknow, and the meticulous and uncompromising research treatment the late director gave his subject becomes evident in My Adventures With Satyajit Ray: The Making Of Shatranj Ke Khilari by Suresh Jindal, who was the producer of the 1977 film.

At around Rs45 lakh, Shatranj Ke Khilari, or The Chess Players, is Ray’s most expensive and only full-length feature in Hindi (his other non-Bengali non-documentaries are Sadgati, which was made for television, and Two, a terrific wordless short). The book, clearly, is Jindal’s labour of love—both for the man and the film that he helped create by badgering a not-unwilling Ray. The result of the collaboration is a film that has remained pretty much unparalleled in the world of cinema, showing one of the most important chapters in imperial Britain’s conquest of India through the eyes of Ray the detached historian.

The challenges faced by Ray (and Jindal) were formidable. In choosing a 1924 short story by Munshi Premchand—a story he had read and loved years ago—Ray was taking a calculated risk. Apart from the sheer scale of the project, the fact remained that he was unfamiliar with Hindi and Urdu, which meant having to carefully select and then depend on a range of specialist assistants (on the other hand, he knew his chess well, having been an addict, and was a connoisseur of the high arts of Lucknow, especially its classical dance and music).

Premchand’s short story is about two chess-obsessed feudal lords (jagirdars), set in 1856, in the days leading up to the annexation of Oudh or Awadh (a region in the modern state of Uttar Pradesh) by the British East India Company. Premchand’s Shatranj had very little about the annexation; Ray’s is all about it. There are two broad themes running through the nearly 2-hour-long retelling of the story. The first is the political events surrounding the annexation of Awadh, ruled by the music-and-poetry-loving nawab Wajid Ali Shah, by forces led by Lieutenant-General Sir James Outram, the warlike resident at Lucknow. The second is the quietly dysfunctional lives of the two chess players. The two strands come together in the climax—Ray’s closing is less dramatic in some ways than Premchand’s, but it’s a stunning Ray finale all right.

All of this needed research. As Jindal puts it in his book, a collection of letters exchanged between Ray and Jindal from the conception to completion of Shatranj: “Ray was a tireless and outstanding researcher. His capacity and love for it was prodigious. His mind was like a steel trap, focused only on the subject at hand."

Every available space in the study in his Kolkata flat, writes Jindal, was piled with books on chess, about the annexation, books and reproductions from Company School paintings, travelogues and “every other possible kind of information on the ambience, food, clothing, mannerisms, music, etc." Together, the two men visited museums, the mansions of the aristocrats of Lucknow and north Kolkata, the Imperial War Museum and the India Office Library in London, the Falaknuma Palace of the nizams of Hyderabad, the City Palace Museum in Jaipur—“It was like researching the period for a PhD. One evening he would be having dinner with the Rajmata of Jaipur and the next morning searching for an expert on the Shia namaz in the winding alleys of old Lucknow. Just accompanying him to his meetings with scholars, academicians, experts and specialists in music, art, architecture and military history was an amazing experience and taught me a great deal."

People lined up to help Ray with Shatranj—historians and other experts in Lucknow, and the possessors of historical artefacts in Hyderabad and Kolkata threw open their doors. There seemed to be an electrifying prescience of a masterpiece in the making. “All of the props are period ones," Ray later told an interviewer. “All of the shawls, the lovely ornamental things…some of them came from the museums. But most from private collections in Calcutta." You can’t get more authentic than that.

However, retaining ownership of every part of the film is an important aspect of Ray’s craft. Researching the period involved sifting through a gigantic list of principal sources. Ray felt obliged to list them out after a critic claimed Ray’s Wajid Ali Shah was “effete and effeminate". Ray’s rebuttal of the criticism, published in The Illustrated Weekly Of India, is nothing short of a masterclass in historical research.

At the end of the day, it is Ray’s insights, born out of heavy spadework, that have made Shatranj Ke Khilari the celebrated masterpiece that it is. It is storytelling of the highest order. Jindal’s book gives the layperson a rare and invaluable glimpse of Ray’s approach to his subject and his craft. 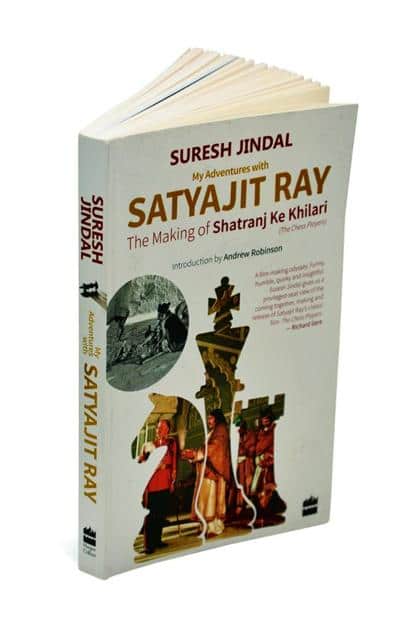