Despite fears of stagnation, the global smartphone market is growing and Chinese smartphone makers have a major role

Chinese smartphone makers continue to be the key drivers of growth in the smartphone market. According to International Data Corporation’s (IDC) Worldwide quarterly mobile phone tracker report for the first quarter of 2017, global smartphone market registered a growth of 4.3%, and the biggest drivers of this growth are Chinese brands such as Huawei, Oppo and Vivo.

The IDC report points that the discounts and deals on the Galaxy S7 and S7 Edge allowed Samsung to clear out the inventory. While budget and mid-range smartphones in the J series and A series helped drive volumes in both emerging and developing markets. 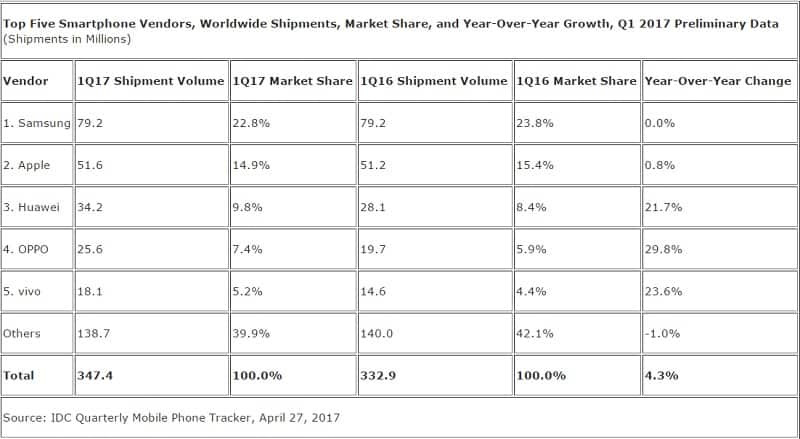 Huawei, which also sells smartphones under the Honor sub-brand, shipped 34.2 million units and reported a market share of 9.8 %, up from 28 million shipments and a market share of 8.4% in 1Q 2016. The company registered a year-on-year growth of 21% and is currently the third-biggest smartphone seller after Samsung and Apple.

Oppo and Vivo, which occupy the fourth and fifth slot, reported an even better year-on-year growth of 29.8% and 23.6%, respectively.

The IDC report attributes Oppo and Vivo’s success to their camera-focused smartphones and expansion outside of China. Almost a quarter of all Oppo shipments were made outside China. Vivo’s emphasis on marketing efforts, especially in India, has improved its brand presence. Despite its failure to make a mark in the US market, Huawei has done well in both premium and affordable segments in China.

Despite the concerns about stagnation in the smartphone market last year, 1Q 2017 saw a steady growth. A total of 347.4 million units were shipped worldwide in 1Q 2017, marking an increase of 4.3% from the 332.2 million units shipped in 1Q 2016. “The first quarter smartphone results further prove that the smartphone industry is not dead and that growth still exists," said Ryan Reith, program vice-president with IDC’s Worldwide Quarterly Mobile Device Trackers.