Rolling along the Brahmaputra

The hazy outlines of Guwahati slowly become sharper; the city on the southern bank of the Brahmaputra is waking up. Thread-like, it clings to the river for the most part, its main bazaars within 50m of the ferry ghats. Riding our bicycles, my husband and I are tracing a route along the northern shore towards the Hayagriva Madhab temple, a historical landmark that has survived centuries of the river’s colonial ambitions.

One part of me thinks it is a foolish task, cycling 60km in one day, after a year of sleepless nights with an infant. But the other part of me craves this chance to travel slowly, interacting intimately with the landscape. To travel with my husband, enjoying some much needed time with him, but also alone, on bicycles that are one behind the other. There is space to share, and there is space for personal observation and independent commentary in our heads. 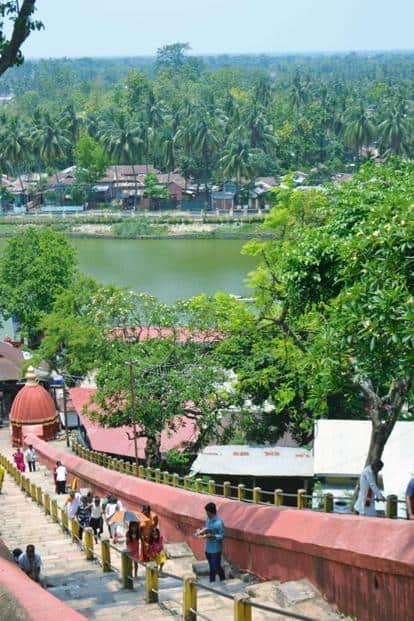 The stairway leading to the temple.

The route hugs the Brahmaputra, replete after feasting on the monsoon rains. Its apparent placidity is a façade, however. Second only to the Amazon in the amount of water it carries, the current runs swiftly, especially at narrow stretches near Guwahati. When we see huge tree trunks and heavy foliage rush under Saraighat Bridge, we know that it has been raining in the upper reaches of the river in Assam and Arunachal Pradesh.

Sometimes the river seems to recede, moving away from the highway and closer to the hills that mark the horizon. Along such stretches, the road is flanked by gorgeous old trees forming a canopy overhead. The Brahmaputra has a wide floodplain, depositing over 10ft of silt each year, making everything a blank canvas. These trees have survived to grow into giants only because they are far enough from the river.

Villages along the highway spill on to the road. Even with heavy vehicles rumbling along, children play in the thin boundary of dust buffering their homes from the traffic. The villagers seem casual and confident that the passing vehicles will accommodate them. After our initial cautiousness wears off, we become as nonchalant as them, not reacting to the container lorries passing by. We pedal on just as the children play on.

Every 10km or so, we stop at tea shops, and rest our legs sitting on small plastic stools. When we talk to the locals, they ask us how we know Assamese, our sharp enunciation and crisp cadences revealing that it is not our mother tongue. We have lived here for four years, we tell them. Sometimes we stop to watch roadside carrom games and cross austere shops with bare signs stating that khar—the famous tree salt of the region—is available.

We pass Poa Mecca, the place that is said to be a quarter as holy as Mecca itself, with soil from that ancient city. Soon, there are fewer glimpses of the river and more scenes of yellow mustard fields. I am disoriented for a minute. Years of Bollywood have conditioned me to associate this flower with Punjab. Then I remember the pungent, sweetish smell that fills my house every Sunday as fresh fish from the river is fried in mustard oil. More memories surface—of jhal muri (spiced puffed rice) tossed lightly in this oil. I remember the parathas with an unusual flavour that I ate on a trek. I feel slightly foolish for wondering what the locals do with so much mustard.

Two hours later, we reach Hajo, a small town with noisy, bustling roads. We get directions to Monikut, the hillock on which the temple is located. The first thing we spot there is the temple tank, where touts encourage us to feed the giant turtles. Take a puja thali, they say, after all these turtles are avatars of Vishnu. We watch the creatures from above, our legs too wobbly to navigate the narrow steps leading down, and enjoy the sight of their hopeful snouts poking out of the water. When we do puff our way up to the temple, the surrounding hills and valleys seem to be painted in nearly every shade of green.

In the cavernous main sanctum, the priest begins his puja and explains to us who and what the idols represent. I hardly hear him, mesmerized by the giant lamps that could easily hold 2-3 litres of oil. Noticing my gaze, the priest tells me those are akhand jyoti—lamps that he claims have been burning non-stop for over 3,000 years. But isn’t the temple only 1,500 years old, I ask. Ah, he says, the locals were praying at this place well before a formal temple was built.

I am cautiously impressed, especially when I imagine this place in an earlier millennium—mountains, valleys, forests, and wetlands flanked by a massive, temperamental river. It is easy to imagine this spot inspiring thoughts of the divine—brick, mortar, and stone notwithstanding. Even give or take a millennium, the continuously burning flame is still an astounding feat, I decide, especially when I remember the vicious dry winds that roar across Bengal and Assam in April—the kal baisakh—often followed by confusing hailstorms.

Returning to the small shop where our bicycles are parked, we quietly eat lunch, letting it all sink in. There will be hours and days ahead with memories and images, conversations during exciting late nights of laundry and dishwashing. We’ll marvel at the different things we noticed (and missed). For now, though, food, water, rest and reflection take precedence.

On the way back, looking at the same sights, in reverse, I think about the traditional motifs associated with the state—floods, rhinos and elephants—and marvel at the much larger variety of sights, sounds and smells we experienced. As I mull on this, the road takes a sharp turn to the left, revealing an elephant eating a giant bamboo shoot. We stop for a minute, speechless at the unexpected appearance of this stereotype. The elephant extends its trunk towards us, curious. But we get back on our bicycles and return home, well before dusk.