One of Urdu's finest writers and an icon of the Hindi film industry, Rahi Masoom Raza is a hero of our times

I decided to translate the late Rahi Masoom Raza’s 1977 Hindi novel Scene 75 into English because I found myself fascinated by its dark humour and brilliant depiction of the underbelly of the Hindi film industry. I was also struck by the forthright manner in which Raza looked at the Hindu-Muslim relationship, something that was—as I was to discover when I read his other novels—a hallmark of his work.

For most people of a certain generation, Rahi Masoom Raza was the man who wrote the powerful dialogue for the 1980s megahit TV serial Mahabharat. For those familiar with his literary work, he was a fine poet and novelist, the author of the masterpiece Aadha Gaon, published in 1966 (he also wrote other acclaimed books like Topi Shukla, Os Ki Boond and Katra Bi Arzoo). For Hindi film fans, he was the writer of popular films such as Mili (1975), Gol Maal (1979) and Lamhe (1991), working closely with film-makers like Raj Khosla, B.R. Chopra and Hrishikesh Mukherjee.

Anyone looking for heroes in polarized times couldn’t do better than turn to Raza: a highly educated, secular, progressive Muslim from Ghazipur (a city on the banks of the Ganga in eastern Uttar Pradesh; in 1970, he wrote in Os Ki Boond that there hadn’t been a communal riot in Ghazipur since 1932), staunchly opposed to fundamentalism of every kind. Almost no other Hindi writer I can think of wrote about the Hindu-Muslim relationship, or about being a Muslim in India, with such profound understanding.

His unchanging view was that religion should never be allowed to intrude into politics because Indian society was not the fiefdom of any religion. “Slowly I am developing a hatred for religion…I am an angry person... Shri Bal Thackeray says I am not a Maharashtrian because Marathi is not my mother tongue…And the RSS says I am not even a Hindustani. I will have to become a Bhartiya/Indian," he wrote in the book Khuda Hafiz Kehne Ka Mod, a collection of essays and articles published in magazines from 1972-92. He was angry with the Congress party for its stand on the Shah Bano case in 1986 (involving the rights of divorced Muslim women), or when it imposed the Emergency in 1975 (he even wrote a novel about it—Katra Bi Arzoo).

In Ghazipur, the lives of Hindus and Muslims were inextricably entwined, and Raza was a product of that world and culture. When he wrote the dialogue for Mahabharat and was attacked by Hindu fundamentalists—how could a Muslim write the dialogue for a Hindu epic?—Raza responded with: “I am a son of the Ganga. Who would know the civilization and culture of India better than I?"

As early as 1957, he published an electrifying epic poem, Krantikatha, in which he depicted 1857 as a heroic, mass uprising against the British. Less than a decade later, he wrote Chhote Aadmi Ki Badi Kahani, on the 1965 war hero Abdul Hamid, who was given the Param Vir Chakra posthumously for his bravery in the tank battle of Asal Uttar in Punjab (Hamid is credited with having single-handedly destroyed seven Pakistani tanks). The story of how Raza came to write Chhote Aadmi Ki Badi Kahani is recounted in a book on him by his close friend Kunwarpal Singh. The 1965 war with Pakistan had led to a disturbing spike in anti-Muslim sentiment. So, then defence minister, YB Chavan, decided to have Abdul Hamid’s story written as a book and widely disseminated, through the radio and other means. It fell to Raza to write the book—Abdul Hamid was from Ghazipur—which he did willingly, but he used the opportunity to address questions of nation, religion and patriotism.

All of Raza’s novels feature the Hindu-Muslim theme. Topi Shukla is about the friendship between Balbhadra Narayan Shukla and Mirza Jirgam Ali Aabdi, both of whom are incomplete without the other; Os Ki Boond looks at a Hindu-Muslim communal riot after independence. Even when writing about the darkest moments in his novels, Raza never loses his unsentimental wit and humour. But it is in Aadha Gaon that we see him at his full power. The novel depicts the Shia community of landlords in Gangauli village in eastern UP over the decades—before 1947 and after, with the deep knife-cut of Partition slicing the narrative. The book questions the idea of Partition and nationhood based on religion. How can anything built on the foundation of hate and fear be auspicious, it asks.

Pakistan is an idea that the villagers of Gangauli respond to with bewilderment. What is this Partition? Where is Pakistan? Why should they leave Gangauli? As one of the characters says, “This is our farm, this is our land, this is where we will stay…" Tannu, who has returned home after fighting in World War II, tells the black sherwani-clad Muslim League activists from Aligarh: “I am a Muslim. But I love this village, because I am this village." His question is: If the Hindu villagers who have never shown any enmity towards you, if they ask you why you voted for Pakistan, what answer will you give them?

Raza’s father, Sayyed Bashir Hasan Abidi, a leading civil lawyer of Ghazipur, refused to leave India for Pakistan. Raza probably inherited—at least in part— this attachment to his hometown from his father; it never left him though he spent over two decades in Bombay (now Mumbai). His love and talent for telling stories can also be traced to Ghazipur. As a child, Raza lost several years to TB and polio. He would lie in bed, listening to stories by the family retainer, Kallu Kaka, specially appointed to entertain the young invalid, devouring the books at home and from the local library, including Urdu translations of the Mahabharat and Ramayan. Despite the roadblocks in his school education, Raza went on to get a PhD from Aligarh Muslim University. He even got a job as a temporary lecturer in the Urdu department and looked set for a fulfilling life as a university don. But then he fell in love with Nayyar Jahan. She had been married previously and everyone tried to dissuade Raza. But he was adamant. The ensuing scandal forced him to leave AMU.

Newly married and jobless, Raza accepted an invitation from an acquaintance to go to Bombay and work in films in 1967. Though he stayed there till his death in 1992, he remained the quintessential outsider, an intellectual caught in the commercial tumult of the Hindi film industry. Always clad in a white sherwani or angarkha, worn over a mulmul kurta, holding a small velvet or brocade batua, he was part of the swathe of celebrated literary poets and writers from the heartland who came to the Hindi film industry to earn their livelihood. Though the early years were difficult, Raza went on to chart a highly successful career in the industry as a writer, working in over 300 films. Movies were his bread and butter, but literature was his love, and he continued writing books.

Scene 75 is set in the Hindi film industry at a time when “Bollywood" was an unstructured sprawl. It was the era when stars “fixed" scenes, producers were in constant pursuit of “solid" golden jubilee ideas, and star-struck hangers-on scrabbled to wrangle invitations for film premieres and mahurats. It was also an industry of frustrated writers—much like the protagonist of Scene 75, Ali Amjad from Banaras, who struggles to reconcile his art with writing for commercial films in Bombay that have names like Chaurahe Ka Dada.

Ali Amjad’s biggest “fault" is, of course, that he is Muslim. When he is looking for a house, he encounters open prejudice from prospective landlords: “‘I am a Muslim and I also work in films,’ Ali Amjad said. He thought it was necessary for him to say this. He was not a religious man…. But he was not ashamed of the fact that he had been born into a Muslim family. And he did not want to insult himself or his country by hiding his name and identity." 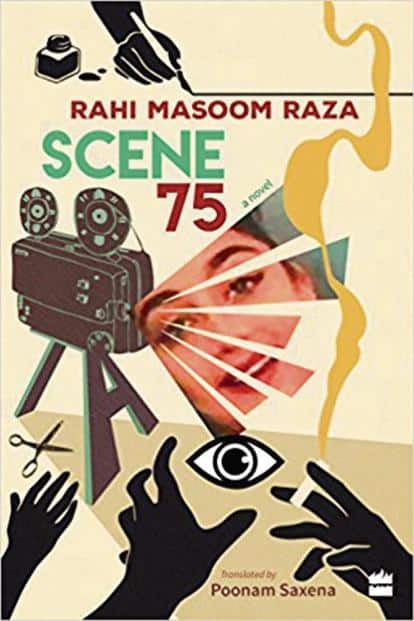