Pune: the world on a platter

Pune does bhakarwadi, beer and biscuits like no one else. And places like Doolally, Chitale Bandhu Mithaiwale and Kayani Bakery are the stuff of legend. Over the last year or so, however, the culinary map of Pune has expanded, with some of the most exciting new restaurants in the country opening their doors in the city. Foods of nostalgia and memory, traditional Bohri food thaals, Brazilian churrasco platters and regional delicacies from south India—there is much to be sampled. With chefs bringing fresh new ideas to the table, and an abundance of local and seasonal ingredients, Pune’s food revolution seems well on its way.

As you walk through Savya Rasa’s intricately carved entrance and are guided to your table by a waiter dressed in a veshti, hip Koregaon Park feels like a world away. The menu is a well-curated journey through the regions of Kongunadu, Chettinad, Nasrani, Malabar, Mangaluru, Mysuru and Nellore, and each dish is supposed to reflect the history and culture of that place. Prepare to be surprised by dishes like Vetrilai Poondu Saadam (rice flavoured with betel leaves) and Yeral Vazhaipoo Kuzhambu (a prawn and banana flower curry) and cocktails like the Rasamtini. 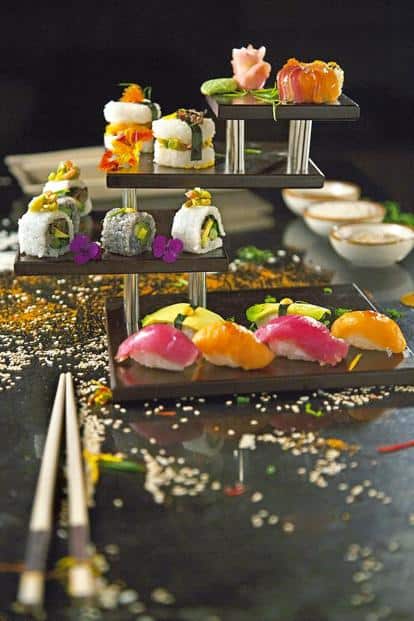 Gong’s sushi platters are a highlight of its menu.

This hip modern Asian restaurant in Balewadi, which opened earlier this month, is the latest offering from restaurateur Anjan Chatterjee’s stable. Minimalist décor, mood lighting and a quiet sophistication seem to be the order of the day. The food is presented with theatrics just like my crab ravioli, which comes in a martini glass drizzled with a Thai red curry sauce. Blooming teas, sakes and stylish cocktails hit all the right notes.

Digger’s Pakoras at Mineority by Saby.

This gastropub by chef Sabyasachi Gorai offers a tribute to India’s mining community and showcases tribal recipes from the country’s different mining areas. Located in Kalyani Nagar, the place features the chef’s interpretations of the food he ate while growing up in the mining towns of the North-East. The murals on the wall feature black and white motifs of life in and around the mines.

Gorai uses ingredients like rosel leaves and mahua berries to create modern versions of traditional tribal drinks. Each drink comes with its own story. The 3 Penicillium Shots, for example, talks about miners who were often treated with penicillin in order to prevent tetanus from injuries suffered in the mines.

The food menu is equally playful, filled with unusual ingredients like chicken stuffed in a Manipuri tupula leaf and served with a gooseberry salsa. Childhood on a Plate harks back to the Bengali doi maach (fish in yogurt gravy) that the chef’s mother used to make.

This Magarpatta restaurant celebrates the long-standing love affair between coconut and seafood and traverses the coast, featuring dishes from Andhra, Malwan, Mangaluru and Kerala. Everything pops with authentic flavours and classics like prawn butter pepper garlic hold their own with dishes like Pomfret Kundapur Kurkure and Crab Guntur Curry.

This one-year-old Koregaon Park restaurant is helmed by Brazilian chef Guto Souza. Expect a menu which reflects the colourful meat-heavy immigrant influences of Brazil ranging from Italian to the Middle Eastern. The Churrascaria (charcoal grill) forms the highlight of the experience. Wash down the food with the cachaça-based Caipirinha, which is one of the bar’s specials.

Santé is used as a toast to good health in French. And Koregaon Park’s Santé Spa Cuisine does just that. The restaurant, which opened in the Sunderbans Complex in November, is all about being one with nature, right down to the tableware which is handcrafted from neem wood. The focus is on healthy and wholesome food with a range of gluten-free and vegan options. Choose from smoothie bowls infused with fruits, seeds and veggies, soups, salads, mains like roasted veggie and ragi tortelles, and multigrain khichda with veggies. Desserts also feature guilt-free options like almond cherry muesli ice cream or a strawberry coconut popsicle.