Opening on 1 February, the latest outing of Philip Glass's opera 'Satyagraha', based on Gandhi's early struggles in South Africa, portrays his philosophical ties with Tolstoy, Tagore and Martin Luther King

Opera loves the obnoxious. It’s a form that hugely benefits from the dregs of life. Treachery, deceit, betrayal, murder, adultery are subjects that make great set pieces, giving the composer a large emotional playground to perform impressive musical somersaults. What, then, can an opera based on the life of an ascetic, peace-loving “half-naked fakir", as Winston Churchill once described Gandhi, be like?

Unusual, for one thing. Philip Glass’s Satyagraha, which premiered in 1980, has no plot. Drawing on Gandhi’s early struggles in South Africa (1893-1914), the opera eschews a linear narrative. Besides, the libretto or the sung text has no dialogue. Instead, the singers sing passages in Sanskrit from the Bhagavad Gita, adapted by the writer Constance DeJong.

The opera has transfixed audiences the world over—a feat not many modern operas can boast of. Its latest outing is at the London Coliseum theatre by English National Opera, running from 1-27 February. A collaboration with the Metropolitan Opera in New York, the production is an epic visual spectacle. Now in its fourth revival, it was devised in 2007 by Phelim McDermott and Julian Crouch, founders of the innovative theatre company called Improbable.

When McDermott’s production first opened, its eye-popping theatricality was declared “a landmark event" in modern opera. With large papier mâché puppets, stiltwalkers, acrobats and aerialists it creates a circus-like atmosphere. But it’s a serious circus, where monstrous puppets come to signify forces of injustice and repression.

Divided into three acts, the opera gives a snapshot of Gandhi’s efforts to abolish discrimination against Indians in South Africa. It was there that he developed the philosophy of non-violent resistance or satyagraha (literally, holding firmly to truth) and honed his moral and political philosophy.

The lack of narrative thrust and Glass’s astoundingly beautiful music induce a contemplative mood. Glass tries to capture the moral and spiritual essence of his acts by weaving a hypnotic musical tapestry–a musical mandala, if you like–with endless repetitions. The use of Sanskrit with no translation further removes the distraction of comprehending what’s being said, allowing for an unadulterated meditative musical experience. “I decided to leave the cushion of language aside," Glass once said in a documentary.

Although dealing with a specific historical period, the work cuts across national and cultural boundaries with its universal themes, such as steadfastness in the face of injustice. Gandhi’s symbolic connection with the past, present and the future is directly established by the constant, but distant, presence of three historical figures (Leo Tolstoy, Rabindranath Tagore and Martin Luther King Jr.), each connected to his life in some way. Throughout the piece, the three figures silently hover above the stage in the background, representing “the past, present and the future of satyagraha."

The three acts of the opera are named after them: Leo Tolstoy for Act I, the Russian writer whose non-fiction works espousing non-violence and love, especially The Kingdom of God is Within You, made a deep impact on a young Gandhi. Rabindranath Tagore for Act II, the Bengali polymath, Gandhi’s friend and sometimes critic. Finally, Martin Luther King Jr. for Act III, the civil rights activist who was greatly influenced by Gandhi’s non-violent approach.

Glass’s long fascination with Indian culture began with his first trip to India in 1966, following a collaboration with Pandit Ravi Shankar on a film score. Shankar would hum the tunes and Glass would transcribe them in western notation. The exposure to Indian music with its rich rhythmic patterns would come to inform his compositional style, which was labelled “minimalist" because of its short, repetitive musical phrases.

Although his music is the textbook example of minimalism, he himself avoids the term, instead preferring “music with repetitive structures". The music is often seen as a soothing balm to the ears, after the early 20th-century experiments in “atonal music", which many deemed “noisy". (Glass’s repetitive style later heavily influenced the film-score composer Hans Zimmer.)

Staging an opera with no narrative is tricky. “You have to find ways of being present in the music whilst it moves forward. You can’t perform the piece without some relationship to meditation," the director Phelim McDermott writes in an email. “The opera has the ability to go beyond narrative and communicate the deeper levels of this story of oppression." McDermott feels the whole piece is like “one meditative prayer about solidarity, spirit and humility, which have a vertical form that expands higher and deeper rather than horizontally in a linear narrative." 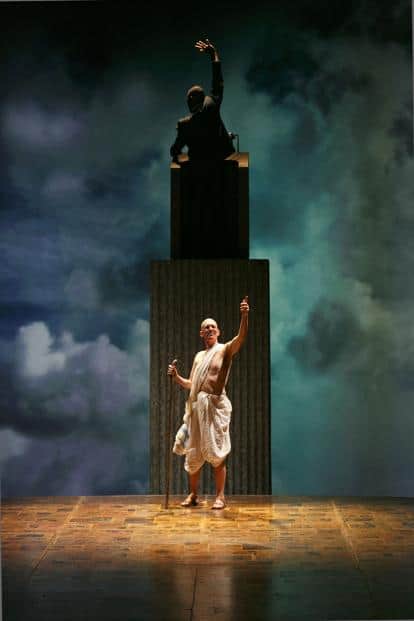 Over the years, Glass’s music has received its share of high-handed pounding from critics who find the repetition “intolerably tedious". But the public loves him. According to the opera-statistics website Operabase, Glass is the most performed living composer. Thanks in no small part to the enduring appeal of Satyagraha. “He’s one of the only living classical composers to continually sell out houses," writes the Glass-specialist American conductor Karen Kamensek, who’s conducting the London production, in an e-mail.

Kamensek feels the piece’s musical appeal has something to do with its primal elements evoking the cyclical heartbeat and breath. “A lot of people feel a basic resonance with that," she says. “One can be transported to pretty amazing places inside oneself that aren’t necessarily pre-programmed. This goes for the artists as well as the audience."

In the last scene, Gandhi sings a line over and over again as if in a rapturous reverie, marking the culmination of all struggles. It’s hauntingly beautiful. In those moments, repetition realizes its musical and spiritual acme. Time seems to stand still. It’s also the moment which moves most audiences to tears.

At that point all academic criticism levelled against Glass is rendered trivial. “You can’t connect with the piece without confronting your own ego," says McDermott. It may not win over all critics, but it has the public’s hearts. That, after all, is the highest compliment an artist can receive. And in the end, perhaps, the only accolade that counts.

Satyagraha by English National Opera is at the London Coliseum from 1-27 February. For details, visit here