One country, many ‘wadis’

After my paternal grandfather’s death, my grandmother, an unyielding conformist, insisted on a strictly vegetarian diet, “as befits the widow of a Brahmin". Her meals were to be cooked separately too. Besides, she had a special pantry—a small, wooden cupboard with mesh doors, where she stocked her staples like muri (puffed rice), khoi (popped rice) and an assortment of sun-dried pellets of ground pulses, collectively known as bori. These boris were added to the range of ghontos, chorchori, jhaal and jhol that comprised my grandmother’s vegetarian meals.

Traditionally, in a Bengali widow’s strictly vegetarian kitchen circumscribed by oppressive strictures, the humble bori took on a more important role. It not only brought some variety and texture to her frugal meals, but also added a “meaty" bite to mushy vegetable dishes.

In times gone by, the widows of the house, often entrusted with the household’s “vegetarian" kitchen, would also be in charge of making huge batches of bori. In Ashapurna Debi’s fêted novel Pratham Pratisruti, the orthodox widow Mokshada is found mulling over her autumnal ritual of making bori, a task she trusts no one else with. “The household required about fourteen maunds of bori—both the kitchens used them but the responsibility rested with the vegetarian kitchen." And it’s not just one kind. Debi writes, “They were made from white pumpkin, poppy seeds, sesame seeds, cumin seeds; some were crispy, some spicy. Then there were lentil boris for sour and bitter curries—they had so many uses!"

But the art of making bori was not limited to widows—it was a skill most Bengali women would learn. In the Tagore household, for instance, new brides would receive scrupulous training in culinary crafts like rolling a paan, making pickles and preserves and finally, preparing bori. “Such training was considered mandatory though the family was wealthy," writes Chitra Deb, in her book Women Of The Tagore Household. Rabindranath Tagore’s niece Pragyasundari Devi writes about more than 15 kinds of sun-dried bori made of radish and sweet potatoes to raw mangoes and wood apple in her cookbook Amish O Niramish Ahaar.

It is incredible how the humble bori or wadi, as it is called in most other states, is everything from a delicate culinary craft to a pantry essential, from a cultural expression to an icon of domesticity in Bengal and beyond.

Food writer Saee Koranne-Khandekar describes a similar scene in Maharashtra where the bori or wadi is called saandge. “Women would sit on the terrace in the scorching summer heat, painstakingly pinching off tiny mounds from ground pulses on to a clean cloth, typically a dhoti. In fact there is an interesting saying, dhotrala chikatlela saandga—which refers to a son-in-law who sticks around, just like a saandga sticks to a dhoti."

As for the spice-specked Punjabi wadiyan, few can resist these. A favourite in Punjabi homes is the wadi waale chawal, a pulao of sorts cooked with crumbled wadiyan. A popular Punjabi folk song eulogizes the same. The lines, “Ambarsare diyan wadiyan ve main khandi na, tu karenda ariyaan ve main sehendi na," describe a wife making it quite clear to her husband that she would neither eat the delicious treats of Amritsar like papad, chhole and wadiyan, nor endure his temper, foul words or beatings. In Rajasthan, especially in regions where vegetables are scarce, most households stock up on mangodi or spiced wadis made with moong dal.

Rakesh Raghunathan, food blogger and travel show host, points out that fermenting and sun-drying ground-up pulses, often mixed with seasonal vegetables, is at its simplest, a means to preserve surplus produce for lean months—a method that has been around for ages. In his book Food And Drinks In Ancient India, Om Prakash writes about vatika, a predecessor of the wadi, mentioned in various ancient texts—“(urad pulse) was soaked in water, the outer covering removed and the pulse ground on a slab of stone. Some spices were mixed in it and the mixture, after churning well with hands, was allowed to ferment for a few days. Then it were formed into small balls and dried." 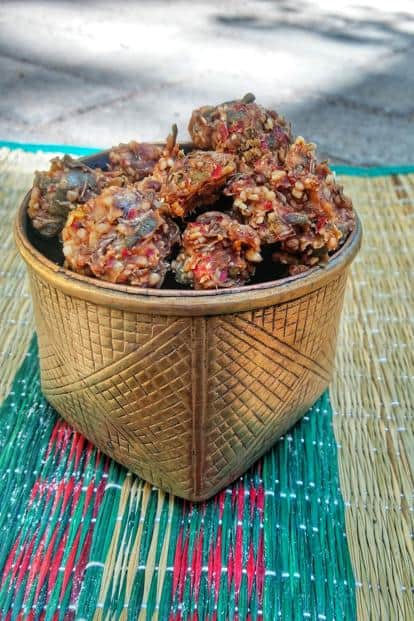 The vatika also finds mention in medieval records like the remarkable 12th century book from Karnataka, Manasollasa. Again, one version of the Chandimangal Kavya, an important work of medieval Bengali literature, mentions kumro (pumpkin) bori thrown into fish chorchori and notey shak cooked with phul bori (made with pulsed moth beans). The Bimalprabandha, one of the earliest works from Gujarat, also mentions wadis in addition to numerous other food items.

Wadi is an essential ingredient in Odiya kitchens too. “We make different kinds of wadis with everything from seeds of ash gourd and pumpkin to sesame, peanut and fried paddy," says Sweta Mohanty, a home chef who’s passionate about Odiya cuisine. As pointed out by her, not all wadis are made just of lentils.

An interesting Bundelkhandi speciality is the bijora. “These are sun-dried sesame cakes," says food researcher Ruchi Shrivastava. “Dry- roasted sesame, petha, chilli, salt and urad dal, are all mixed together, shaped into small discs and sun-dried," she adds. Bijoras are typically deep-fried and eaten with khichdi, cooked into light gravies or kadhi.

Culinary consultant Rushina Munshaw Ghildiyal, an authority on food from the hills of Uttarakhand, talks about the region’s delightful naal wadi, made using colocasia stems that are hung from a line, coated with urad dal batter, allowed to dry and then cut up. “The colocasia stems dry out and wither away, leaving delicious wadis with a hollow centre," says Munshaw Ghildiyal. Besides, there are wadis made with gahat ki dal, a regional staple. The large pahadi cucumbers are also a coveted ingredient for wadis in the hills.

Raghunathan, on the other hand, talks about a unique Tamil snack made with black-eyed beans and red pumpkin. The black-eyed beans are soaked overnight and ground up with grated red pumpkin. The batter is flavoured with spices like cumin, fenugreek, fennel and red chillies, shaped into flattened discs and dried in the sun. Besides, there is the thalippu vadagam, basically sun-dried balls made with pulses and spices used primarily for seasoning curries.

However, unlike in the south where the dry summer months are apt for making sun-dried food items, in Bengal, the bori-making season usually starts at the onset of winters, when the sun is mellow and comforting, and the air dry. It is during this time that women in the villages of Midnapore in West Bengal gear up to make the goyna bori. These boris are intricately patterned to replicate the motifs of traditional ornaments. The urad dal is painstaking ground on a grinding stone, whipped by hand until light and airy and piped it into delicate designs on a bed of poppy seeds. A veritable culinary heirloom, there was a time when goyna bori was an essential part of bridal trousseaus.

“Maharashtrians, among other things, make saandge as part of rukhwat," says Koranne-Khandekar. Rukhwat is a collection of items, mostly edibles, that a bride carries with her to her husband’s home. “I have heard stories of an aunt who would make chaklis in the size and shape of wicker baskets and delicately coloured saandge in different flavours, for weddings in the family," she recalls.

In Rajasthan also, wedding festivities often start with the ritual of mangodi todna, an elaborate ritual where the bride-to-be, along with other married women, makes wadis. The wadis are later sent as part of the bridal trousseau. “The idea is that even if there is a scarcity of food due to natural calamity, the bride will be able to make a meal for her family with the wadi," says Mohanty, while referring to a similar tradition in Odisha.

In Bengal, numerous interesting, often quirky, traditions and rituals have grown around the bori. Early morning on the day of Nabanna, a harvest festival in the month of Agrahayana (November-December), the women of North Kolkata’s illustrious Darjipara Mitra Bari gather on the terrace of their Nilmoni Street mansion for a unique ceremony—bori haath, which announces the start of the bori-making season.

“The ritual begins with making two large lumps of this batter. We call these buro (old man) and buri (old woman). Dhaan (wheat husk) and dubyo are sprinkled on them, and buri is anointed with vermillion," says Anasua Biswas, a daughter of the household. “ Around them regular-sized boris are ‘dropped’, with skilled flicks and left to dry in the sun," she adds.

Interestingly, during Durga Puja at the Mitra household, a unique assortment of bori, preserved carefully to ensure ritual purity, is offered to the goddess. There’s regular jhol’er (curried) bori, tiny bhaajar bori (with a generous sprinkling of poppy seeds), palong shaak’er (spinach) bori, beet palong’er (beet-spinach) bori, cheene badam’er bori that comes with a peanut in the centre, dhoka’r bori (square ones with a sprinkling of nigella seeds), and matar dal’er (split peas) bori. “Items like bori and achaar are seen as tokens of familial affection. Durga is also a daughter of the household, she must be treated to these," adds Biswas. So, there’s another avatar of the humble bori—an icon of familial warmth, a mother’s love for a daughter.