If you're on a holiday no one can see or 'like', is it even real? A traveller overcomes social media withdrawal at a Himalayan retreat with misty mountain views and delicious Kumaoni food

Which peak is which?" I asked the smiling young man who brought the tea. “I guess that tallest one is Nanda Devi? What’s the one next to it?"

“Himalay hain. They are all Himalayas," the man beamed. He had grown up in these parts of Uttarakhand. Used to a dazzling range of snow-capped peaks, he’d never needed to learn to name and label them all, like a lepidopterist collecting butterflies.

But Bishan, my partner, and I are plains people, peak collectors. We needed names so that we could tag them on our Instagram feed, to find our social media bearings.

We can just Google a photographic map of this part of the Himalayas to find out which peak is which, said Bishan. The problem was, here at the Itmenaan Estate in Uttarakhand, there was no Wi-Fi, my dongle was useless, and the network on the phone spotty.

Itmenaan dilaana, in Urdu, means to calm someone down, clearly a phrase popularized long before social media. The tumult of even the ocean is just the shallow end of the swimming pool when compared to the turbulence of our insatiable hunger to appear happening on social media.

Where are you going, asked my mother when I told her about the trip. Itmenaan Estate. Where is that? Near Chalnichhina village. Where is that? About 4 hours from Kathgodam railway station. Then you have to walk another 15 minutes or so to actually get there. What’s it near? Nowhere in particular. But what’s there? Peace. Tranquillity. Calm. I was thinking about the TripAdvisor reviews. Curl up with a book. Take a nap. Gaze at the mountains. Listen to the breeze in the pine trees. Later I realized all this is really code for withdrawal from social media. 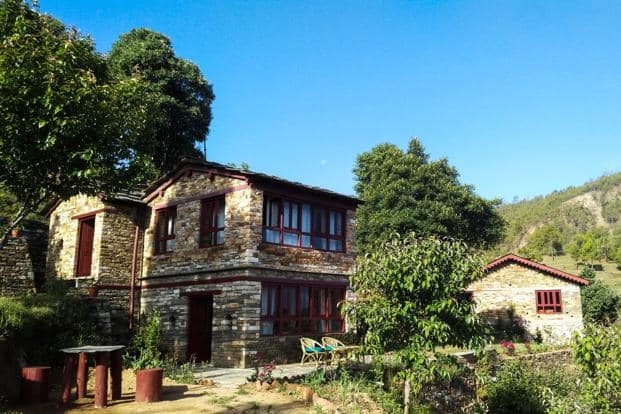 It was idyllic getting there through pine and deodar forests and the occasional scarlet burst of rhododendron. The 100-year-old stone cottage is beautiful, the doors opening out to a tumbling valley in cascading shades of green, behind which lurked peaks obliterated by clouds. The all-stone bathroom, built by stacking stones without using cement, bathed in natural light from the skylight, was, as their website calls it, “arguably the best bathroom in the Himalayas". The roses were in bloom and bees and butterflies flitted around as we sat on the stone ledge in the sun with our welcome drink of rhododendron juice. The quiet was unbelievable.

But once we had breathed in deeply of the quiet, we had to confront the essential question every holiday presents—what do we do now?

We have become used to thinking even a do-nothing holiday comes with cute mountain cafés, cooking classes with local ingredients, and Ayurvedic spas. Here there was none of that. The cook asked if we wanted chicken for dinner and then trekked up to the little village to buy it. Bishan and I looked at each other as realization dawned that we might actually have to make conversation.

I tried to remember the activities listed on the website.

Go for a walk among the pines. We did that, startling a couple of goats.

Bird watching. A tiny blue and yellow one had made its nest in the wall outside our window. Every few minutes it would fly out and return with a freshly-caught wriggling worm, which its chicks would greet with ecstatic cheeps. We watched the bird but is it really bird-watching if you never try to identify it?

We could hike down to a waterfall. It’s just down there, one of the employees said casually, skipping down the hillside in his rubber sandals. After 10 minutes of trying to follow him gingerly and slipping and sliding on wet stones, we could barely hear the sound of faraway water. Dusk was gathering. We abandoned the adventure. 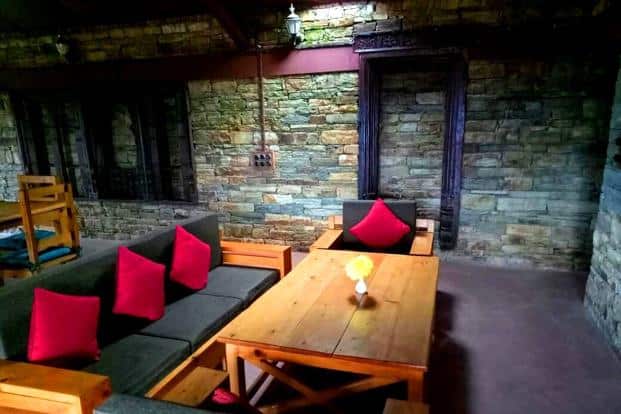 “We should have brought the Scrabble," said Bishan. In the little “common" room, all I found were some discarded novels and a chessboard. Suddenly, fat drops of rain fell. Within minutes, mist blanketed the valleys and hail started clattering on the roof. Lightning flashed over the hills in front, dramatically splitting the dark clouds while thunder growled. Then, just as suddenly, it was over. The clouds disappeared and the stars started coming out, one after the other, like lights being turned on. Bishan tried to identify Orion’s belt while I tried in vain to upload a video of rain clouds rolling across the mountains on Instagram.

Giving up, I focused instead on getting the kitchen boy to get us a flask of hot water. In perhaps our only moment of foresight, we had brought along a small bottle of whisky. Hot water, whisky and Orion’s belt sounded like a good combination in the post-rain chill. For dinner, the cook had promised us local delicacies—bhang ki chatni made with hemp and aloo gutka with the nutty jakhiya (Asian spiderflower) seeds only found in these parts. It was delicious but afterwards, there was nothing to do but sleep.

That night, I suddenly woke with a start. It was snug under the blanket, but my heart was thudding as I missed the reassuring hum of a big city, even a sleeping one. Here the darkness smothered in on all sides like cotton wool, making me feel anxious, cut off from everything I knew. Somewhere in the real world, friends shared selfies and pictures of meals they were eating, while I tossed and turned in the quiet, having a holiday no one could see or “like". As the sky lightened, the bird parents resumed their worm hunt, and the greys outside became green. Bishan sleepily looked out of the door and gasped.

Where there had been only clouds, there were peaks now, glistening in the rain-washed morning. Finally, I understood what it meant to surrender to the awe of the Himalayas even when you cannot immediately Facebook it.

As we sat outside having our morning tea, the elderly Californian couple in the next room emerged, ready for their morning trek to a local village.

“Oh dear," said her husband. “We told everyone back home we were having tea while looking at Mt Everest." “Our friends are so envious," said his wife. “One said it’s been on her bucket list forever."

“What are you going to do?" I said laughing.

And I realized that was the real gift of cutting ourselves off from Facebook and Instagram. Free from their geo-tagging, check-ins and labelling, everything was suddenly magically possible and the difference between a Nanda Devi and an Everest was nothing more than a tall story, a lie as white as a snowcapped peak, to be savoured with tea and biscuits on a fresh mountain morning in a beautiful cottage near nowhere. Bhang ki chutney: A delicious tangy chutney made with roast hemp seeds mixed with cumin and other spices.

Kulath ki dal: A hearty garlic and asafoetida infused ‘dal’ made of horse gram, a specialty of the hills.

Sisunak saag: The tender leaves of stinging nettles or ‘bichhu ghaas’ become a local delicacy when boiled and tossed with ‘jakhiya’ seeds.

Lingadu saag: If you come during the monsoon, you should try the stir-fried, tender, wild asparagus fronds.

Thechwani: The simple ‘pahadi mooli’ or radish which is crushed into pieces and stir-fried with onions and tomatoes.