The trio that brought us the much loved The Bombay Canteen, are now ready with a modern Goan restaurant, O Pedro. But is there a recipe to success in the food business? Lounge gets the ingredient list.

The afternoon sun reflected off a duct-taped door at one of the Bandra-Kurla Complex’s (BKC’s) newest “it" addresses in Mumbai—the Godrej BKC. An old-fashioned sign with “O Pedro" on it peeked out from under a cluster of hand-drawn bougainvilleas. One of the staff members was tackling a mountain of ochre serviettes. Hidden behind a wooden sideboard, all that was visible were his fingers, creating perfect origami folds. Energy levels were high, minor accidents and crises were punctuated by calm spells. There was banter, and occasional meltdowns in the kitchen. It was five days to opening night when we visited.

A powerful image, or a song, has often given rise to big ideas. In this case though, it was an animated cactus sporting a sombrero and the Douglas Adams-style ultimate question, “What is a happy place?" For Sameer Seth, Yash Bhanage and Floyd Cardoz, partners of hospitality brand Hunger Inc., who opened their first restaurant, The Bombay Canteen (TBC) in 2015, this was the question that led them to their new restaurant, O Pedro.

There is no real data that can enable restaurateurs to gauge what works in India. And these numbers largely fall outside the fine-dining space in the standard north Indian, south Indian and fast-food format. Deciding on a brand could become a guessing game. When the partners were bandying around ideas in December, a PowerPoint presentation by Bhanage helped them bring it together. We are shown the same presentation, complete with a hatted cactus and a beaming mariachi band.

This soon became the holy grail, the germ of an idea that everyone involved in O Pedro had to build on. A Mexican restaurant was thrown around as an option—all three partners had lived in the US and their idea of Mexican food was synonymous with a fun night of margaritas, tacos and good music. To replicate that in India would be challenging because while Mexico was the perfect “happy place" in the American context, in India its relevance was questionable.

“The reason people keep coming back to The Bombay Canteen is because there is a context to everything, from the Rooh Afza to the methi thepla tacos," says Bhanage. It was in search of this context that the team kept brainstorming till they finally came up with an apt replacement—Goa, India’s very own corner of sunshine and happiness.

Despite the proximity to Goa, Mumbai seemed to have a dearth of dedicated Goan restaurants. The two or three that did exist had been around for decades and featured the same triumvirate of prawn curry-vindaloo-chorizo pao as well as a mishmash of Konkani, Malabar and north Indian food.

However, yet another Goan restaurant could either be too safe a bet or one that could go terribly wrong. For many Bombaywallas, Goa is a weekend getaway, a place that is synonymous with good times. Consequently, the beaches, sun, sand, sea, cocktails and food are really familiar.

What the team at O Pedro hopes to offer a different take on Goa, one that it feels is not as well known as the touristed parts of the state. This is the Goa of Mario Miranda, of small storied villages, of poiwallas and chourico makers, of Goan aunties and their special home-brewed wines and fenis, of carnivals, fisherfolk and Portuguese history.

The team’s research on Goa and Portugal has yielded a particular iteration for the restaurant that they hope will be able to capture some of these aspects.

In keeping with this idea, Ayaz Basrai of The Busride Design Studio had to create a space that would transport visitors to a nostalgia-filled old Goa, away from the tourist shacks and the sea. Sitting under Portuguese-style vaulted ceilings and peeking through the lace-curtained windows on to the chrome and glass corporate parks of the BKC, O Pedro feels like a place from another time—in a good way.

Bhanage and Seth believe real estate is key to a restaurant’s success or failure. When TBC opened in Kamala Mills in Mumbai, there were hardly any eateries there; today there are over 50 restaurants and bars in the space, which has become one of the city’s top dining destinations. When we walked through this new corner of the BKC, it felt like a culinary tour through different parts of the world. From the East Village chic of Toast & Tonic to the casual Japanese pop aesthetic of Hello Guppy and a European fine-dining experience at Hemant Oberoi, there is much for the discerning eater. With a trendy co-working space across the street, embassies and a massive diamond bourse around the corner, and an upcoming mall and convention centre, there is plenty of potential.

The challenge remains to capture office-goers and adapt to their daily 9-5 schedules, which O Pedro is trying to address with its happy hours and soon to be launched express lunch menu. As Hunger Inc. hopes to replicate the success of its earlier restaurant, it will also see some of the team members from TBC moving to O Pedro, among them chef Hussain Shahzad (erstwhile sous chef at TBC), who will take over as executive chef, and TBC beverage manager Rahul Raghav, who will oversee the bar here as well.

Goa on a plate

Cardoz tells us that though many associate Goa with beach shacks, vindaloo and chilled beer, there is much more to be had in the local markets, small fish-thali restaurants and Goan homes. And as the O Pedro team ate their way around the state, they uncovered these culinary gems, learnt the old Portuguese recipes and experienced the diverse produce and traditions that had been introduced by the colonizers—from beans, a cornerstone of the state’s vegetarian cuisine, to the tradition of canning and pickling fish.

The chefs have crafted a modern menu that uses all this material as inspiration and adds surprising tweaks, like a feijoada (a Portuguese pork and bean stew), which substitutes the pork with slow-cooked duck, or a roast chicken roulade with cafreal masala. O Pedro is a homecoming for Cardoz, for it allows him to showcase Goan food and culture and channel his own childhood memories of growing up in a Goan Catholic family. There are dishes like Beryl’s fish curry and Margao Choriz & Bacon Pulao, drawn directly from his mother’s and grandmother’s recipes, while others, like the rissois or the baffad curry, are based on his research into Portuguese heritage dishes. An interesting addition is a separate all-vegetarian menu based on the food of Goa’s Saraswat Brahmins, featuring dishes like the Panji Green Watana Rassa (dried grean pea curry) and Saraswat Goan Pink Beans & Potato Koftas Ton-Dak.

As excise laws ban the export of drinks like feni and urak, beverage manager Raghav has tried to mimic these home brews by steeping fruits and spices in different liquors and creating bitters and tinctures. “In Goa we found these little stories around alcohol, and that is what we have tried to bring to our cocktail menu," says Bhanage.

We visited next on opening night, 7 October. Sixty-three was an important number for D-Day evening, indicating the number of reservations received, the first night its doors would open to the public. A few hours later, activity was at its peak. In the kitchen, minor crises had been averted.

Shahzad stood at the pass, testing the temperature and doneness of dishes, tasting sauces for seasoning and adding the final garnish. Dishes that didn’t meet his standards were returned to the line.

Cardoz kept a hawk’s eye on the proceedings, tweaking presentations. He interrogated a server about an unfinished grilled lobster. He sized up the portion size of the chilli pakoras and deemed it far too large for an appetizer. He made a quick decision that the dessert section needed its own oven as he saw the pastry chef darting across the kitchen, precariously balancing plates, to heat her desserts before service.

The whole kitchen felt like a theatre where everything was choreographed—servers sashayed in and out with trays of food, line cooks pirouetted with pots and pans, assistants stacked plates, and the two chefs conducted the proceedings. Outside, the tables were laden with food, the bar was lined with drinks, and conversation flowed. This night, at least, it felt like we were in a “happy place". 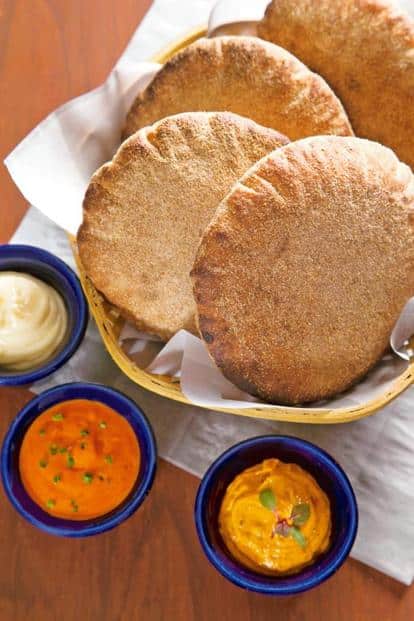 House-baked sourdough ‘poi’ with an assortment of flavoured butters.

Mornings in traditional Goan homes are ushered in with the tinkling bell of the ‘poi-walla’s’ cycle; his ‘poi’ (leavened Goan bread) can be eaten with everything from plain butter to fiery prawn ‘balchaos’. Chef Hussain Shahzad, who spent a lot of time with Goan bakers to learn how to make ‘poi’ the traditional way, creates a fresh batch daily in the restaurant’s wood-fired oven; it is served with delicious butters in flavours like chorizo, black pepper and ‘balchao’. Replicating the Goan alcohol culture was hard without the classic local brews like ‘feni’ . Not to be deterred, Rahul Raghav has created his own brews by infusing vodka with cashew and rum with ‘kokum’ (a souring agent). His Cashew-In-Spirit is an ode to Goan home brews, while Finding Funny plays on the traditional way of cutting the pungent smell of ‘feni’ with salt.