In a new exhibition at the Mumbai gallery, Clare Arni's photographs capture the alter-egos that lurk beneath all of us

If the press of a button was all there was to photography, one would assume there would be many more Ansel Adams and Diane Arbuses around. As it happens, the physical action of clicking is merely the culmination of the artistic process which begins in the photographer’s mind. And so it is with Notorious Rowdies, a new photography exhibition at Mumbai’s TARQ gallery by Clare Arni, a British-born Bengaluru-based photographer, who was taken by the idea of a “rowdy" after reading newspaper stories of violence and gore involving local gangsters. She set about persuading friends to pose for her, invoking their inner, latent “rowdy". The result is this exhibition of 38 photographs depicting a mix of people wearing the persona of a “notorious rowdy" in bizarre costumes and unusual locations.

The subject’s intense gaze towards the lens—and therefore the viewer—could be unsettling as it is in Cop Shiva 2, in which a half-naked man with a blade in one hand, is crouching on broken roof tiles. The vicious look on his face reminds one of the iconic, and rather threatening, shot of Toshiro Mifune in Akira Kurosawa’s film Seven Samurai. To spend enough time in front of the photograph could be an unnerving experience. “I can’t tell you what it was like. That person…you watch that person change and become their other evil self," Arni says over the phone. “In fact, I would get scared, wondering whether I’ve unleashed some inner demon." 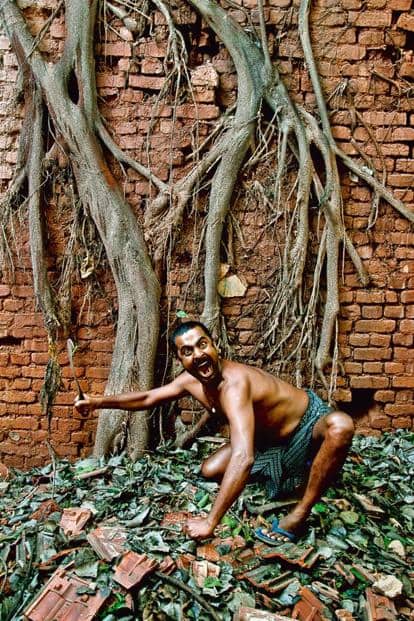 Before the shoot, there would be long discussions with the subject about his/her respective rowdy character. “The idea was that each person would come up with their inner rowdy," she says. In the age of social media when the cult of self-projection reigns supreme, Arni’s idea was to subvert the tendency of putting one’s best face forward. “We want to always present ourselves as better, but here, I was inverting the whole thing and asking them to be evil. This was a very cathartic process for the person."

I can’t tell you what it was like... I would get scared, wondering whether I’ve unleashed some inner demon.- Clare Arni

A text by Zac O’Yeah, the detective novelist and one of Arni’s early rowdy volunteers (pictured in The Foreign Hand 2), that accompanies the exhibition, describes in humorous detail the day of their shoot. The diverse rowdies that Arni’s subjects have summoned up are, when not violent, humorous or eccentric in a self-aware way. They include, to describe a few, underworld dons, a masked Zorro-like figure walking in a dungeon, a sword-bearing warrior figure representing the Kodava people of Coorg, and a gang in a run-down factory.

While looking closely at the photographs, it’s unavoidable to entertain a bit of scepticism. Were the participants who were asked to “delve into the inner life of their chosen rowdy", really embodying their subliminal persona or was it all role-playing? That doubt is short-lived though, as the vigour and intensity within those frames proves that it isn’t all play-acting. If we look long enough, we might even see in the rowdies’ expressions our own responses to situations in our daily lives—our disappointments, estrangements, expectations not met, our dreams unrealized. One would, then, realize that the truthfulness of their portrayal is beside the point, as with every passing frame it soon dawns that the notorious rowdy is present as much on the gallery wall, as it is in each one of us.