Nalini Malani: A memoirist for the Subaltern

The second part of veteran feminist artist's mammoth retrospective, The Rebellion of the Dead, opens in Italy

A few weeks before artist Nalini Malani’s retrospective exhibition, The Rebellion Of The Dead: 1969-2018—Part II, opens at Castello di Rivoli Museum of Contemporary Art in Rivoli (about 140km from Milan), the museum released a video. In it, Malani is shown drawing in solitude. Immersed in the pale-yellow light of the museum, she draws with focused precision on a wall using charcoal, making a site-responsive piece. “My drawing has maps of Bombay," she explains off camera in the video. “It also refers to the modernist period of architecture in Bombay, but it portrays people who are dispossessed, the subaltern." This is the second instalment of Malani’s extensive two-part retrospective; the first opened at Center Pompidou, Paris, in October.

The artist’s politically charged works have often explored themes of violence and loss—with a particular focus on women, where she has panned her lens on their place in society and their tutored passivity. Much of Malani’s works, however, also reflect her pre-occupation with the marginalized, the displaced and the powerless. “It’s like George Orwell who once said, ‘Either we all live in a decent world or nobody does’," she says on the phone. “We don’t give enough attention to the very people who are the backbone of our cities. The cleaners and the scavengers—our cities are functioning because of them. Their importance is enormous. So, while the subaltern may not speak, we must give them a voice and respect."

The in-situ wall drawing is titled City Of Desires—Global Parasites. It is an ode to Mumbai’s cultural plurality and its characteristic inclusivity. Several scavengers, plumbers and labourers—“People who take care of the city but are themselves invisible"—are dwellers who’ve travelled from different parts of the country to find a home in Mumbai. “For me, Bombay has always been a city of multiplicity, where people dream of utopia. Many people from rural India pack their belongings and come to this city in search of better future. So, this city is a city of desires—a city that gives you a sense of hope."

While Malani’s retrospective, curated by Marcella Beccaria, showcases works from her oeuvre that have been shown over the last 50 years at various galleries and museums, Dream Houses (Version I) is a work that will premiere alongside City Of Desires. The stop-motion animation was made by Malani at the beginning of her career. It will be projected on the wall drawing. 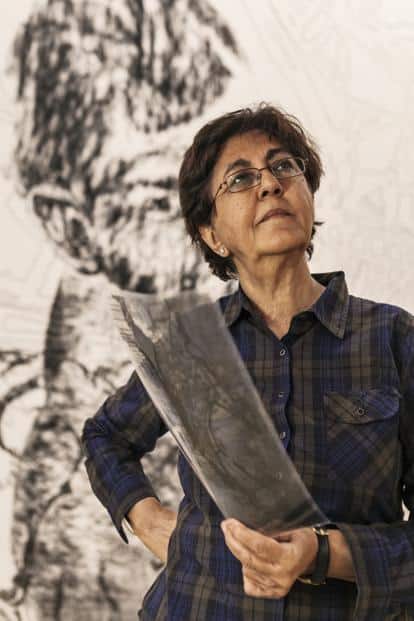 A while after Dream Houses was made in 1969, a young Malani had picked up a box, packed the film and relegated it to darkness. “Between the ages of 23 and 30, I had made five experimental films, working with 8mm and 16mm film. But nobody was interested in seeing them," Malani recalls. “Perhaps that was because I was a woman artist with no substantial standing in the field. Women artists had no place in the art industry at that time." It was only decades later, in 2010, that Malani’s husband rediscovered 32 boxes of her earlier work with the help of Lotte Betting, a Dutch art historian. Together, they digitalized the films and catalogued all of her work meticulously. “These boxes had lots of stuff—even my drawings and collages. I’m fortunate that they didn’t get fungus or get destroyed entirely," she says.

Dream Houses weaves into the exhibition’s overarching theme of inclusivity. The stop-motion animation was inspired by veteran architect Charles Correa. “In the 1960s, Correa was asked to make a township plan for New Bombay, which was called the Cidco Project. And he, who often visited artists like us at Akbar Padamsee’s Vision Exchange Workshop (VIEW), would speak in the most humanitarian way about the dream city he was planning, where there would be room for people belonging to all classes. This was modernism at work in India, and architects like him were instrumental in advocating that sense of inclusivity."

Belonging to a family that was forced to uproot itself during Partition, Malani’s works have often been informed by experiences narrated to her by her grandparents and parents. “They’ve never been able to come out of the shadow of that kind of violence. And I use that trauma as a moment in the history of our nation, where these things should never happen again. Human lives are precious and not one life should be lost on religious grounds."

In Search Of Vanished Blood (2012), also part of this retrospective, holds a magnifying glass over similar theatres of violence. A haunting, large-scale immersive video/shadow play, the work is a plea against the brutality of war. The title was borrowed from Faiz Ahmed Faiz’s poem, Lahu Ka Surag. While the poem is about what had happened in East Pakistan during the 1971 war, for Malani, it carries a universal theme of inhumanity, hatred, chaos and loss.

‘Twice Upon A Time’.

The retrospective is spread across 10,000 sq. ft. Other notable works on display include a five-channel video installation called Mother India: Transactions In The Construction Of Pain (2005), which juxtaposes visuals of Partition and the 2002 Gujarat riots, interspersed with religious symbols and women with distorted faces; The Tables Have Turned (2008) consisting of 32 reverse painted metal turntables that cast shadows; a multi-panel painting installation titled Twice Upon A Time (2014); and, Listening To The Shades (2008), a set of 42 paintings that read like a film script.

Listening To The Shades draws immensely from the tradition of Greek theatre. Made using acrylic sheets, acrylic paint, ink and enamel, it harks back to the theme of violence against women which Malani often explores. The title alludes to the Furies in the Greek tragedy, The Oresteia, where the Furies (a trio of goddesses who are considered to be instruments of justice) were ordered to be buried underground. “Even today in patriarchal societies, women are repressed; we have to metaphorically put our ears to the ground to listen to them," says Malani.

A majority of Indian women continue to have almost no agency and the death of sewage workers, who have no access to safe equipment or healthcare, is still nothing unusual. Malani’s works might have been made over a period of 50 years, but they continue to be deeply relevant even today.

A still from ‘Now I See It Now I Don’t’. Photo courtesy: Nalini Malani

In Mumbai, on Mumbai

Can a city ever be yours? Can you ever turn to it for succour? Such are the questions evoked by Nalini Malani’s video work, Now I See It Now I Don’t (2018), in which scraggly lines and superimposed images suggest an inevitable tragedy. The near-apocalyptic work shows a person floundering at sea, and a monstrous vision of the Gateway of India looming ahead. The historic memorial arch, meant to welcome voyagers, seems to tease and tempt the struggling swimmer. The video work is currently showing at Jhaveri Contemporary gallery’s new space in Mumbai, as part of its inaugural exhibition, What’s Essential. Malani describes the 58-second video work as “drawings in motion", and has gifted it to Jhaveri Contemporary on account of its relocation.