Mamata, how a star was born

An exclusive excerpt from a new biography of Mamata Banerjee highlights her dramatic entry into politics, defeating the veteran Somnath Chatterjee

Somnath Chatterjee, former leader of the CPI(M) and erstwhile Speaker in the lower house of Parliament, had no plans of joining politics. A good student, he followed his eminent barrister father, Nirmal Chandra Chatterjee, into the field of law. Chatterjee Senior was the president of the Akhil Bharatiya Hindu Mahasabha (ABHM) when Mahatma Gandhi was assassinated. And in the succeeding years, he found it necessary to distance himself from the right-wing organization. On 30 January 1948, Nathuram Vinayak Godse shot Gandhi thrice in the chest. All Hindu nationalist organizations found their activities restricted after this incident. Godse was found to have been a member of both the ABHM as well as a new splinter right-wing group, the Rashtriya Swayamsevak Sangh (RSS), founded by former ABHM member Keshav Baliram Hedgewar.

Nirmal served three terms as a Member of Parliament (MP). The first was as a Hindu Mahasabha candidate from Hooghly in the first Lok Sabha in 1952. In 1963, the Burdwan seat fell vacant. During that time, Nirmal was working as the president of the All India Civil Liberties Council. The CPI, recognizing his contribution to civil society, invited him to contest the Burdwan seat as an independent candidate with CPI support. He joined the CPI(M) (formed after the CPI split into two parties) and went on to retain his Lok Sabha seat in 1967. But by the time the 5th Lok Sabha elections came calling in 1971, Nirmal’s health had deteriorated and CPI(M) comrades such as S.K. Acharya and Promode Dasgupta insisted that his son carry forward the baton.

As a student of Calcutta’s prestigious Presidency College, Somnath (Chatterjee)’s only tryst with politics had been when he had accompanied his college mates to receive the famous freedom fighter Sarat Chandra Bose (Subhas Chandra Bose’s elder brother) at the Howrah train station. He was content with his practice of law and the occasional backend organizational support he provided to his politician father (Nirmal Chandra Chatterjee), which included arranging jeeps for his campaigns and getting posters printed during elections.

Somnath was not easy to woo. He held his ground even when stalwarts such as Jyoti Basu, Promode Dasgupta and Harkishan Singh Surjeet regularly dropped into his Southern Avenue residence, close to the Rabindra Sarobar Lake, imploring him to contest in his father’s stead. But he finally relented and said that if his father asked him to contest, he would do so. One day while Somnath was at court, some Marxist leaders dropped by once again to convince his father and Chatterjee Senior gave the nod. Somnath was informed later. ‘Jyoti [Basu] is coming home every day; I have told them that I would not stop you from contesting,’ Nirmal told his son, his last directive to him before his death in the same year.

Even though he agreed to contest from Burdwan against Congress’s Bholanath Sen, Somnath decided to fight as an independent. However, he took on the CPI(M)’s symbol of sickle and hammer. He won a thumping victory and officially joined the CPI(M) on Promode Dasgupta’s request. In 1977, Jyoti Basu informed Somnath that the party had decided to field him from the new constituency of Jadavpur in Calcutta for the Lok Sabha polls. He won comfortably, and kept up his winning streak in the 1980 general elections as well.

But the fourth time, in 1984, Somnath was blindsided by an upcoming woman leader—Mamata Banerjee. He had only heard of the young Congress leader till then. Pranab Mukherjee, the then Union finance minister, was desperately looking for a suitable opponent to Somnath. ‘I was frantically looking for a candidate to stand against Somnath Chatterjee from Jadavpur, considered a bastion of the CPI(M). Rajiv [Gandhi] wanted a young star who would fight,’ Pranab said. The Congress had already considered Jadavpur a foregone conclusion but wanted young blood in the fray. Pranab called up West Bengal Congress leader and trade unionist Subrata Mukherjee to ask for suggestions.

Rajiv Gandhi desired a new face for the Jadavpur constituency. But no one from Bengal Congress wanted to stand against Somnath. Subrata Mukherjee approached Pradip Ghosh and Sushovan Banerjee to contest; both apparently refused what they felt was a losing battle. Subrata, who had more or less mentored Mamata in the early days, then recommended Mamata’s name to the party top brass in Delhi. He telephoned Pranab at his office in the evening. ‘You know this girl . . . She is a fighter . . . You have met her,’ Subrata informed Pranab.

Pranab had met Mamata during the All India Congress Committee’s (AICC) plenary session held in Calcutta in 1983. Senior leaders attending the meeting needed special care, and many times they would not receive it. So Subrata had given the responsibility to Mamata. She was to attend to Kamlapati Tripathi, Y.B. Chauhan and some other very senior leaders. She took care of them well and everyone was in praise of her. She worked day and night for three days straight ensuring that all the Congress leaders occupying Nizam Palace, including Rajiv Gandhi, had a comfortable stay. ‘She is a good girl, a fighter,’ Pranab agreed.

Mamata’s tenacity was undeniable. She would paste anti-Left posters through the night. In the morning, the communist workers would remove them, only to find new ones the next morning; Mamata had been at it again in the night. Such zealousness had attracted the attention of party seniors. Pranab backed Mamata’s name and it was settled that the slight, hitherto unknown lady would contest from Jadavpur.

That year, the Congress fielded fresh faces from several seats. Pranab even campaigned for Mamata. ‘I saw that she was working harder than any other candidate. She was writing the posters herself, she was wall-writing herself. Naturally, the workers too felt enthused,’ Pranab said. ‘She is very hard-working and can mix with people very quickly. She reads the pulse of the people . . . She was a firebrand all along. And that is how Mamata won the ticket that would change her life forever. There were no expectations from her; no one imagined her as David to CPI(M)’s Goliath.

It was during the scrutiny of nominations that Somnath met Mamata. She bent down to touch his feet, a common practice among Bengalis—to take the blessings of elders. An uncomfortable Somnath put his hands out and prevented her from doing so. Also, not uncommon. But this became a controversy. Mamata accused Somnath of being high-handed and insinuated in no unclear terms that she had been insulted. This was not just any young leader; Mamata understood politics and was already playing it. 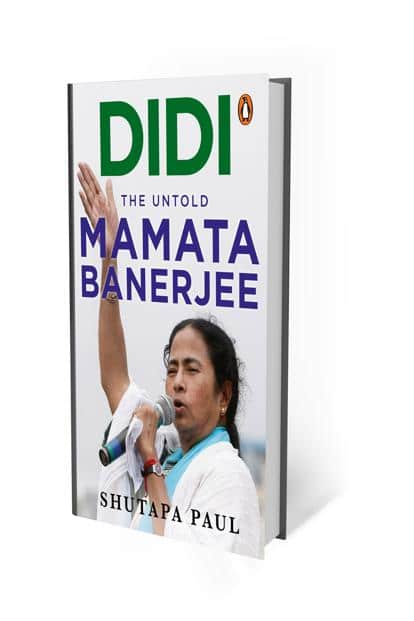 But neither Somnath nor his party took her too seriously. Jadavpur would be a cakewalk, his party colleagues assured him. But as the day of the election dawned, he knew that things were not right.

Of all the constituencies, Kabitirtha, with its 50:50 percentage of Hindu and Muslim voters, worried him the most. ‘Why haven’t you set up any meetings there? I should go there, a worried Somnath told Nirmal Ray, the man meant to prime the constituency for him. There is no reason to fret, guaranteed Nirmal; Somnath’s name, his previous two terms as Jadavpur MP and the CPI(M)’s vast influence were enough. Somnath was guaranteed that he would sail through.

But the young leader from Congress had not taken the task lightly. She knew that she was up against a behemoth like Somnath. There was no room for complacence; she had a point to prove especially to her own party members. She went from door-to-door asking for votes. She campaigned regularly and addressed meetings daily.

Though she was young, she was fairly smart for her age. While addressing party events, she would cheekily tell the crowd, ‘Aami mama ke bollam, “Mama tumi toh eto baar jeeteyccho, ebar aamake chance dao." Mama kukur cherey dilo (I told my maternal uncle, “You’ve won enough, now let me have a chance." He let loose his dogs on me).’ Somnath was the ‘mama’, not by relation, but it was a clever tactic. Along with the jibes, Mamata’s campaign on the ground remained intense.

Banerjee scattering seeds at the land handed over to the farmers in Singur. The Supreme Court ruled in 2016 that the land acquisition process was faulty and not for public purpose. Photo: PTI

Mamata’s political fortunes were anyway on the rise. She was gradually gaining popularity and was ready to make her mark in Indian parliamentary politics. And no one could stop her. Indira Gandhi’s assassination a few months before the election also helped garner sympathy votes for Congress candidates. Somnath’s worst fears came true when the results were declared. Kabitirtha had fallen and he lost Jadavpur by about 19,660 votes. Mamata had achieved the unthinkable and shocked the CPI(M). She became one of the youngest parliamentarians in the history of Indian democracy. She came out of nowhere and wrested victory in the CPI(M) stronghold of Jadavpur. No one saw it coming; even Mamata and her party were equally surprised at the unexpected win. This was the first big blow that she gave to the CPI(M). And it would not be her last.

A defeated Somnath accepted the verdict of the people and telephoned his opponent to congratulate her. In the next Lok Sabha election, in 1989, Somnath returned to his winning ways, but Mamata lost to the CPI(M)’s Malini Bhattacharya in the same Jadavpur constituency by 30,900 votes. That Mamata’s win against Somnath was a fluke aided by the CPI(M)’s arrogance and Indira Gandhi’s demise could only be offered up as excuses. It was undeniable that a star had been born.