The important thing is to live in the present. A present which is the sum total of many pasts and anticipates the future. The two plays that the Puducherry-based theatre and arts company Adishakti brings to Mumbai’s Prithvi Theatre this weekend achieve this by morphing myth and reality to highlight issues that are still begging for a resolution.

The first play, Brhannala, questions the possibility of cultivating the male/female in every human being. Using the story of Arjuna’s stint disguised as a dance teacher in the 13th year of the Pandavas’ exile—when he fashioned himself as Brhannala—the play explores the concept of Ardhanarishwara through Arjuna/Brhannala, who is also Savyasachin, the ambidextrous one, to suggest how male-female polarities can be united.

The dilemma of acknowledging and activating the opposing qualities inherent in each individual, and suggesting that opening a complementary dialogue between the left and right sides of the brain can open up the past, present and future, is the premise of the play.

The play itself is an experiment in timelessness. When Adishakti’s founder, Veenapani Chawla, started work on it, the challenge was to make her actor, Vinay Kumar K.J., feel, move and express like a woman. Everything they tried failed to achieve the desired effect, till, in a moment of epiphany, she fitted him with a bra. Arjuna, the warrior who wishes to learn to “shoot an arrow that travels faster than the speed of light", withdrew into himself, trying to hide his breasts. Thus gifting his body a new vocabulary.

Now, 16 years after his first performance as Brhannala, Vinay Kumar has captured the vigour he brought into his choreographed movements to translate them into a more complex expression that invites an emotional response from the audience. As is the case with most of Chawla’s work, each play remains a work in progress. 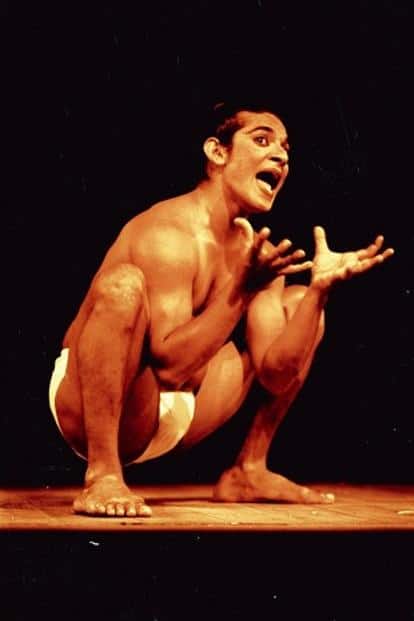 The second play, The Tenth Head, is more complex. Though it centres on Ravana and the dilemma his 10th head faces in wanting to “live alone, think alone, and fornicate alone without the nine other rascals who are greedy for power, wealth and revenge", the very modern question it poses is the dilemma of the individual who runs contrary to his community. Movement, mime, animated images and a minimal text combine in this play to explore the issue. Ravana’s second problem, of aesthetically balancing 10 heads, five on one side, four on the other, is tackled as a parallel story with quiet sarcasm.

None of these weighty issues underlying the two plays, however, make for sombre theatre. Expect finely tuned, lyrical body movements; expect music that combines urban rhythms with classical ragas, expect humour and pathos and wit. These are stories of demigods that were first heard in childhood and yet continue to resonate.

For the performers involved too, it is a new journey this time around. As I watched a rehearsal of The Tenth Head last week at the Adishakti auditorium in Puducherry, it was obvious that things are different, even while being much the same. Unlike Brhannala, The Tenth Head was the result of Chawla’s implementation of the effort to ensure that each of her actors could become powerhouses of creativity at multiple levels, independent of her to an extent.

The Tenth Head was Vinay Kumar’s text, and though Chawla gave it shape as its director, it fell to Vinay Kumar to take it exactly where Chawla wanted it to go. Like all her other plays, her last production too premiered at Prithvi in 2013, and by her own admission, it was a premiere that was rushed before she was satisfied.

Audience feedback has always been of value in reshaping an Adishakti production and Chawla used the feedback from the audience and critical friends to guide the play into a tighter frame. When she died suddenly in 2014 before seeing the final changes come to rehearsal stage, it was left to her team to carry it forward.

They started rehearsals the day after the funeral. The play took form over months, and a series of continuous performances in Bengaluru helped iron out any remaining glitches.

But each show is a test on its own. As the rehearsal progresses, Vinay Kumar stops a movement midway to correct the rhythm of a drummer, or make a change in the lighting. Watching them, there is a sense of déjà vu. That this has happened in the past, and will happen again, sometime in the future.

Meanwhile, there is the present.