Lounge Original: ‘Confessions of a Menopausal Man’ by Shubhangi Swarup

The rise of a single degree may have caused the catastrophe, but when all life vanishes, it feels oddly cold. Novelist Shubhangi Swarup examines the psyche of a man who finds himself nurturing a young life at a time when the planet is sending strong warnings to humanity

Last night, my wife accused me of being menopausal. She said that I was having a midlife crisis, and I needed help. The truth is, I don’t know any better.

I’m a responsible man. I have quadrupled my parents’ financial portfolio over the years. I don’t let my wife go alone to the gynaec, as I know they scare her, those swabs and prods. So what if I go drinking with my buddies, leaving her alone with the baby, I know when his next vaccination is due! It’s on my Google calender.

I’m not an asshole either. I’m the first one to donate old clothes to those charity drives, and always have loose change handy for beggars. Making a million bucks a day doesn’t make you a good human, I tell my juniors. But make those million bucks, before you do charity. I am not a bad guy.

So why am I defending myself, you’re curious. After all, I am sitting in my cabin, lording over an entire floor of high achievers, and everything in the kingdom seems to be fine. Even this instant coffee, which tastes like Bournvita otherwise, tastes alright today.

I have been quite emotional of late. I’ve been having these strange dreams that could be classified as nightmares. She thinks I need sleeping pills, not chamomile.

Days ago, I dreamt of a majestic flock of flamingoes flying past our office window. We were in the middle of a big negotiation in the conference room, when I stopped mid-sentence to turn around and look out of the glass façade that extends from the ceiling to the floor. The sight of those flamingoes took my breath away. Almost human sized with wings wider than my arms, warm pink and snow-white, curvy beaked and keen eyed.

They looked directly at me. Not a single one blinked or wavered, as the entire flock flew directly into the concrete glass, wave after wave...I saw their necks snap, as fragile as plant stems. I saw cracks emerge on their beaks.

I saw feathers float in their absence. It felt like the earth itself had opened up to further their fall. I woke up, shivering and sweating. It’s strange how sweat replaces tears as one grows older, isn’t it? Had I been six or eight years old, I would have woken up wailing.

It has been days since it happened, and I feel the same helplessness when I see chicken, crammed into cages in cheap poultry shops. The gooseflesh, the shrieks, that panic and confusion, it lives on inside me like a vision. And if that is what it is, then why me? I am no visionary, nor am I a psychic. I don’t pray or meditate. I don’t torture birds either (I only eat them).

The only thing I am guilty of is staring out of windows, day in and day out. Window in and window out.

Our firm paid a bomb for an office on the 35th floor in a 30-storeyed city. To be in the heart of the corporate district and at the height of affluence. One can hire the best interior designers, but one cannot change the view. This is Gotham city in the heart of Mahabharat. This is Antilla in the middle of Slumdog Millionaire.

At this height, the horizon haunts me. It leaves me breathless like a panic attack. So I’ve started to pull the blinds down in the conference room and even here, in my cabin. “Photosensitivity," I tell them. “The glare gives me red eyes."

A string of flyovers is the gateway to our office. As I drive by each morning, on one side is a capitalist’s dream come true. On the other is its corresponding nightmare. And when the disasters arrive, they don’t care about the distinction. I have witnessed grand fires in high-rises from my cabin window, spewing fumes into the sky like urban volcanoes. 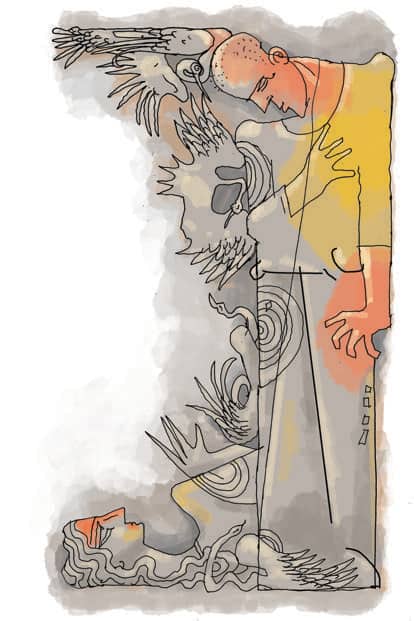 Alright, now even you have noticed how morbid my thoughts can get. In my defense, it isn’t death, but the dying that intrigues me. And the difference isn’t just a technical one. The dying can be saved.

Last year, we went to Phuket for our babymoon. It felt right, especially since that’s where we went for our honeymoon too. I love scuba diving, and my wife loves pad thai and cheap shopping. The two trips were only three years apart. Yet, the island had changed (and I’m not referring to the malls and trannies). The dive shop warned me of the rampant coral bleaching. Some Indians, it turned out, had demanded their money back after the dive, but they couldn’t be held responsible for the graveyard shift.

I didn’t care. Three years ago, this was where I spotted a whale shark. It was the best moment of my life, until I witnessed my baby’s birth.

I took measured breaths as I floated along on the seafloor. And let me tell you what it looked like. The delicate coral limbs had hardened into white claws. Only the tiny scavengers remained. The big dramatic life forms had vanished, along with the bright colours. It was now a pale and abandoned reef.

Sometimes, I find myself all alone on my morning swim. An empty chlorinated blue confronts me, through the fish eye lens of my swimming goggles. And the reef returns as a sharp drop in temperature. The rise of a single degree may have caused the catastrophe, but when all life vanishes, it feels oddly cold. Corpse cold.

Are you cold too? Is that why you’re shivering and restless? I’m sorry, but I can’t make my cabin warmer, the temperature is centrally controlled. The women in our office collectively complained against this to our CEO, and he just asked them to carry a shawl to work. It’s hilarious, the fat guy wears a synthetic suit to work on a humid island such as this. He then cranks the air-con to feel at ease. He criss-crosses between AC lobbies, cabins, cars, gyms, restaurants and eventually falls asleep in the air-conditioned cocoon of his bedroom. He spends his day avoiding all contact with the outdoors, and then fears the MRI test he must take. He feels trapped by the dark, cold capsule.

I envy my doodh-walla sometimes. He has a simple life, dressed in a lungi, baniyan and chappals. Free to air his underarms and scratch his balls, whenever he pleases.

I wish I could take you home, it’s cosier and happier there, but I haven’t told my wife about you yet. “People get an S-Class or hair-weave when they hit midlife crisis," I can imagine her saying, “no one rescues a kitten!"

Those flamingoes may be lost, but they haven’t given up. They are probably in search of a new home. Perhaps the coral too has slipped into coma, waiting for us to fix the thermostat.-

All I know is that if I hadn’t picked you up from the car park that day, you may have not made it. You don’t need only cat food to heal, you also need love and assurance. You’re as lost as the flamingoes. As vulnerable as my own eight-month-old when he wakes up crying, grappling with nightmares he can’t express.

I wonder how he dreams…does he witness stories or images? I really hope they are stories. I really hope he remembers them for the rest of his life. It is crucial for his sanity.

When I was a child, I would dream in stories. I would spend my breakfast time narrating them to my sister, who couldn’t care less. But now when I wake up, I struggle with my memory. The unconscious quickly fades into an alarm-induced state of waking up. Leaving me alone with images instead of stories. Hallucinatory, visionary images. Is that the beginning of schizophrenia? When all one can see are broken, disconnected images in the place of stories? When one considers himself disconnected from all that lives and conspires outside his window? Sometimes, I use the glass screen as an armour to protect myself from me.

Last night, I dreamt again. This time I dreamt of you. You and I, alone in a room. An empty room with windows overlooking a vast emptiness. The view made me nervous. It led me to believe that nothing else existed in that world. No family, no loved ones, no cities, no society, no nothing. Not even a stray dog or crow.

But it didn’t feel like a nightmare. I had you in it, didn’t I? I felt calmed by your presence. A tiny kitten with eyes big enough to accommodate the whole world. As reliant on me as I am on him.

As I lay awake in bed, I realized what it’s all about. Those flamingoes may be lost, but they haven’t given up. They are probably in search of a new home. Perhaps the coral too has slipped into coma, waiting for us to fix the thermostat.

When I go home today, I will take over my wife’s night duties. I will change my son’s diapers and put him to bed. I will pour her a glass of whatever she desires, and then I will tell her about you. I will tell her that I rescued a kitten and I want to bring it home. It will be perfect. We will be a complete family.

If she accuses me of going crazy, I will not deny it. In fact, I will give her further evidence of it. I plan to support my female colleagues in their war against the AC. “Why don’t you wear shorts to work, instead of asking them to carry a shawl?" I will tell our CEO.

Shubhangi Swarup’s debut novel Latitudes Of Longing (HarperCollins India) was on best-seller lists soon after its release. It won the Tata Literature Live First Book Award in 2018, and was shortlisted for the JCB prize for Literature.