Louis Kahn: The man who listened to the bricks

Louis Kahn, one of the finest modern architects, designed the IIM-A campus in 1974. As it undergoes restoration, a writer recounts the experience of living there and revisits the architect who envisioned it

The biography of an architect presents an interesting challenge. All good biographies, and autobiographies, are stories of not just people but also ideas and institutions. And how people interact with, adapt to, and exert influence on these ideas and institutions. But because biographies, or at least the good ones, subordinate these ideas to the individual, you are never really overwhelmed. Thus you can read a biography of Albert Einstein without entirely understanding his science, a biography of Christopher Columbus without understanding sailing, and biographies of Pelé or Diego Maradona without ever having foot meet ball in your entire life.

Books on architecture, on the other hand, can always be a bit challenging for the non-architect. That is not a criticism of architecture or architectural writing. In fact it is, in some ways, a compliment. Like any field that seems to straddle the arts and the sciences, architecture does not solve problems but translates them into more pleasurable problems. You want a house on this plot? Okay, take this building, now figure out how you will respond to it and make it respond to you. In a sense, living in a house is a constant, never-ending response to the architect’s vision. 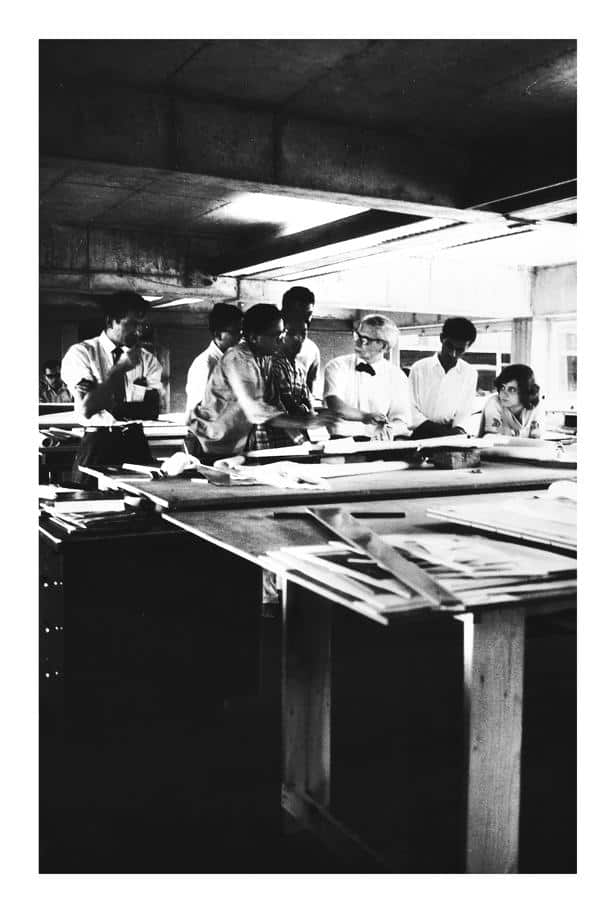 Louis Kahn at work with Balkrishna Doshi in the early 1960s

Wendy Lesser’s excellent new biography of American architect Louis Kahn (You Say To Brick: The Life Of Louis Kahn, published by Farrar, Straus and Giroux, March 2017) captures these tendencies and challenges wonderfully. That she has written such a readable biography of a man who appears to have been so complex, layered and even mystical, is a triumph in itself.

Kahn is perhaps best known in India for a building that is not only one of his finest works, but also houses one of the finest educational institutions in India: the Indian Institute of Management, Ahmedabad (IIM-A).

When you first step into the campus, as I did in 2003, the buildings at IIM-A tend to push you out to its peripheries. The complex of classrooms, administrative offices, dormitories, gardens and public areas seems so daunting the farther you go in, that you are propelled to stay on it’s “edges": by the main gate, near the mess, outside the “ramp" that runs up to the rows of diagonally arranged dormitories.

To be perfectly honest, almost nothing makes any sense. Louis Kahn’s campus is its own initiation ceremony. Make sense of this first, Kahn seems to be saying, before you make sense of balance sheets, market segmentation and the IS-LM model.

I spent most of that first morning by the “Harvard steps", those famous, picturesque flight of stairs that lead up to the portal. I sat there watching car after car after car unload passengers with their baggage. They stepped out, the new students with their parents, and were instantly struck by the disorientation that Kahn seemed to revel in.

There is a sense in Kahn’s work, Lesser writes, “that oblique approaches are the truest ones, and that entrances should be a bit hard to find". This will instantly resonate with anyone who has ever spent any time on the IIM-A campus. That confounding cocktail of the oblique and elusive, in a nutshell, was my first few weeks on the campus of IIM-A. It was crazy. I would say bye to someone, walk up some stairs, down some other stairs, around a pillar, through a corridor and run into the same people I’d just bid farewell to. I would try to make it from Dorm 5 to Dorm 10, say, and find myself permanently stuck in the basement of Dorm 2. It was like finally buying a really expensive, critically acclaimed computer game, only to find yourself helplessly running into walls for hours on end.

And then, suddenly, one day, everything made sense. ‘You Say To Brick: The Life Of Louis Kahn’captures these tendencies and challenges wonderfully.

The IIM-A campus is broadly divided into two sections. The old section, designed by Kahn in 1974, is on one side of the road, and on the other side is the “new campus" (designed by HCP Design, Planning and Management, with Bimal Patel as director, in 2009). The two sections are connected by a subterranean tunnel. How many business schools have subterranean tunnels? On a campus that was proud of its exceptionalism, this was one more thing to feel exceptional about. Shortly after the tunnel was inaugurated, sometime in late 2004, someone had thoughtfully installed an exhibition inside the tunnel on Kahn and the history of the institute’s architecture. Students glanced at the boards and photographs as they walked by. For many, I suspect, the information was a revelation. The sad truth is that few students, at least when I was on campus, spent any time at all realizing that they were living in one of the great buildings of the world.

Every once in a while you would spot an attractive architecture student, sometimes from Ahmedabad, but also from Tokyo or London, gasping at the building, taking photographs and briskly sketching. And we would wonder: “What the heck is wrong with these people? It is just a hostel with rooms and a building with offices. Also, do you want to get some coffee?"

What a pity. Because Lesser wonderfully captures the significance of the building not just in absolute architectural terms but also in what it signifies in the life of Louis Kahn. If only this book had been around in 2003.

Kahn created a campus in which the public spaces were uniquely contemplative and quiet, while the private ones exploded with life and activity-

Two passages in Lesser’s book will particularly strike a chord with former inmates. The first is her description of the “classic Kahn seduction": “the somewhat opaque exterior, the elusive front door, the low-ceilinged entryway, and then the sudden arousal and fulfilment of one’s previously unknown desire". Time and time again, this is what you experienced on Kahn’s campus. Each time you walked in and out of a classroom, or the library, or that long corridor by the classroom, or through a hidden walkway under the ramp…each time Kahn played his little tricks on you, lavishing you with light one moment and a slab of shadow the next. These tricks, these seductions, created a campus in which the public spaces were uniquely contemplative and quiet, while the private ones exploded with life and activity.

The other passage is where Lesser spoke of Kahn’s idea of “wrapping ruins around buildings". In other words, his tendency of building deceptively simple outer walls around complex, playful inner ones.

The IIM-A campus is one of five Kahn works that Lesser goes into in some detail in chapters interspersed with the story of Kahn’s life and art and work (residents, old and current, of the new campus across the road will be stunned by how similar it is to Kahn’s work for the Salk Institute for Biological Studies in La Jolla, US). This is an eminently readable book about a truly fascinating man. So wonderfully does it capture the thought and experience of good architecture that you almost want to go back to business school again and experience Kahn’s magic just one more time.