The secondary characters of the Marvel-Netflix universe are more intriguing, less cardboard than the heroes

I am the lucky girl who pulled you out of the garbage."

Claire Temple puts people in their place. The first time we meet Temple, a bright and fiercely dedicated nurse, this is the line she uses to introduce herself to her patient, Daredevil, a hero she finds broken and bleeding in the trash. This happens in the second episode of Netflix’s Daredevil—based on the Marvel Comics character, a blind superhero who is a lawyer by day and a crimefighter with horns on his helmet by night—and while the show might be named after him, the moment belongs only to her.

Played by the preposterously cool Rosario Dawson, Temple is a force. Based loosely on a comic book character nicknamed “Night Nurse", who patches up pulverized superheroes, she is the only character to feature in all five of the Marvel-Netflix shows. She is fiercely intelligent, rational, decisive and determined—things superheroes, prone to showy bursts of impulse, have trouble with—and she is often the only one holding it together even as the heroes around her appear increasingly clueless (granted, they could often be concussed). With Temple around, we know do-gooders are in good hands.

It isn’t just Temple. There have been five Marvel-Netflix shows so far—Daredevil, Jessica Jones, Iron Fist, Luke Cage and The Defenders—and while most of the actors chosen to play the title heroes are doing so valiantly, it is hard to spend an entire season of television watching heroes flail and fall and fly when their very narrative has become a template. This is when we, as audiences, feel fatigued by the heroes themselves and turn to the fascinating characters by their side.

These characters may not have their names on the Netflix marquee but are, all too often, more intriguing and less cardboard than the heroes. With lesser lore weighing them down, these characters are less beholden to comic mythology and the writers and actors have more freedom in translating them to the screen. There’s razor-edged lawyer Jeri Hogarth, played by Carrie-Anne Moss; killer ninja Elektra Natchios, played by Elodie Yung; badass police detective Misty Knight, played by Simone Missick; and martial arts expert Colleen Wing, played by Jessica Henwick. Without question, Ms Henwick and her character are, for instance, much more integral to the series Iron Fist than Iron Fist himself, a whiny white man-boy with an Asian complex.

Two things are immediately evident from this quick roll-call of standout characters: they are all women, and several of them belong to ethnic minorities. It is therefore easy to imagine why these characters haven’t yet been given their own television shows, and that in itself is, paradoxically, one more reason we can’t get enough of them. Since there isn’t already a show about a tough black female cop with a bionic arm who plays basketball and takes no nonsense even from a man with bulletproof skin—and we aren’t likely to see one anytime soon—we automatically love the Misty Knight we do get to see in these Netflix shows.

I suppose we could blame this on Spider-Man.

In the Golden Age of comics—from the 1930s to the 1950s—superhero comics revolved almost entirely around the hero. The hero was everything to the narrative, and from his secret identity to his deep-rooted conflict to his giant action set-pieces, he was all that mattered. There were secondary characters—like Jimmy Olsen, the eager, freckled photographer snapping pictures of Superman—but they were entirely defined by the superhero himself. It was his story, and everyone else was an amusement or a threat to him.

In 1962, when Stan Lee and Steve Ditko created The Amazing Spider-Man, a web-spinning wall-crawler who happened to be a teenage boy, they concocted a protagonist who was young and silly and overwhelmed—by his own powers and responsibilities, certainly, but also by all that was around him, from too-intelligent aunts to redheaded girls. Spider-Man issues were stuffed with drama which may have been soap-operatic but—to the indulgent young hero’s self-pitying eyes—took on Shakespearian heft. The supporting cast in these comics, as a result, started having genuinely fleshed subplots and narratives and histories. The residents of the friendly neighbourhood had their own lives.

Not to say, of course, that memorable secondary characters didn’t exist before this. Everyone who has read a single issue of Batman knows about Commissioner Gordon, Batman’s contact in the Gotham City Police Department, or Alfred Pennyworth, Bruce Wayne’s marvellous and omniscient butler, but contrast this, if you will, to a Spidey comic where Aunt May considers marrying supervillain Otto Octavius, or simply where Mary Jane Watson—the love of Spider-Man’s life—takes decisions based on her career and not his. As we routinely see on the best television, the principal strand of story is not the only one.

Naturally, this approach soon flowed into other Marvel comics as well as those made by competitors DC, but despite the fact that hitherto bit-characters and sidekicks in superhero comics now routinely spin-off to headline their own comic books, this hasn’t translated to films and television in quite the same way, with producers evidently keen to keep the title character on screen for as long as possible (exasperatingly enough, they even remove a masked man’s mask as often as they can, just so audiences can presumably be reassured by the sight of a known actor’s face).

Things are, however, changing. These TV shows are being used to gauge the temperature of the audiences, so to speak, and the success of a series like Luke Cage—set in Harlem with a hoodie-clad black hero with invincible skin, and an explosive soundtrack featuring Method Man—goes a long, long way in letting Marvel make a politically charged movie about Black Panther. Ruler of the Marvel nation of Wakanda, Black Panther is a wise, powerful and gloriously black figure, a highly relevant character who recently enjoyed a stunning run of comics written by the brilliant journalist Ta-Nehisi Coates. Due in February, the film looks spectacular, and this is in no small part due to the vibrantly diverse cast.

Like superheroes themselves, movies are traditionally slow on the uptake. They mean well, however, and so they catch up. Meanwhile, these super supporting characters are—more than the heroes—holding up these television shows, and making sure they roll an eye when they need. 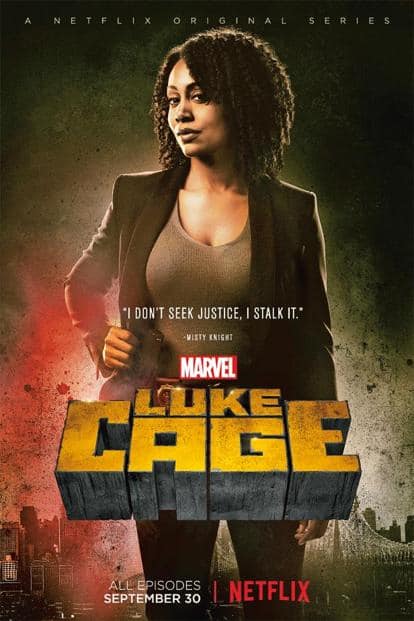 In the last episode of The Defenders, Colleen Wing calls it like it is. “Claire, for what it’s worth, I know Luke and the other guys have abilities, but so do you," she tells Temple. “You have saved just as many lives, helped just as many people. You just don’t make the headlines." Amen. It is indeed great to live in a world where we get to see Dawson play Claire Temple in series after series, but we are frustratingly far from a Netflix show based on, say, Daughters Of The Dragon, a comic-book series where Wing and Misty Knight work together to kick doors down in their own superlative style.

On the other hand, Dawson’s combustible performance has made a significant impact on the books. In the pages of Marvel Comics, after decades of absence, Claire Temple is back on the scene and decidedly more prominent than ever. Like these other exceptional ladies, she’s doing what she does best. She’s keeping the heroes super without needing to be called one.