There’s a reason many Kashmiri women don’t put their pictures on display on Facebook and Twitter," says Mantasha Binti Rashid, 31, one of the founding members of the Kashmir Women’s Collective (KWC), a support group formally launched in 2016 that draws from women of all professions. It is shaped along the ideological lines of the Combahee River Collective, led by black feminists in the US in the 1970s.

Since the storm over the #MeToo movement broke over social media timelines, Rashid and her colleagues have been fighting a smear campaign on Facebook (FB) after the collective published a list of names on FB of men accused of predatory behaviour. The names listed, among others, are Gowher Geelani, a political analyst, Sameer Yasir, a contractual lecturer at the Islamic University of Science and Technology, journalist Fahad Shah, and Masood Muntazar, a Doordarshan anchor.

Given Jammu and Kashmir’s largely conservative society, the collective was braced for the backlash, says Rashid. They expected retaliation, but the slut-shaming that followed surprised them. Thankfully, the women the KWC interviewed and gathered evidence from were not named.

“The backlash towards them would have been unimaginable," says Shehryar Khanum, 31, a lawyer by profession and a KWC member. Since the list went public, a local journalist, Wasim Khalid, has written FB posts accusing KWC members, and a few journalists, of being “pro-statist" and “pro-occupation" agents of the Research and Analysis Wing (RAW). He has accused, without naming, a KWC member of “giving favours to her male bosses" in return for a “long leave during her probation period in a government job". Khalid is not one of the people named in the list.

Rashid alleges that Geelani is circulating an inappropriate photo of a woman to prove that he was in a consensual relationship with her. Rashid also claims that Geelani is now indirectly blackmailing the KWC. “He wrote me a very suave message (on FB messenger) saying ‘I have material against all of you’. Which is basically blackmail," she claims.

Rashid fears that if the woman’s identity is revealed by Geelani, she may be attacked in a slut-shaming campaign. Several calls, a text and a WhatsApp message by this reporter to Geelani went unanswered.

But the most worrying aspect, Khanum says, is the accusation of being RAW agents. In a place like Kashmir, such labels, even if unfounded, can raise suspicion. “It can get you discredited or killed," says Khanum.

The smear attack got so out of hand that Rashid and her team filed an FIR on 14 October under Sections 153 (wantonly giving provocation with intent to cause riot) and 505 (statements conducting to public mischief) under the Ranbir Penal Code (the main criminal code applicable in the state), a copy of which Lounge has access to.

“We fear for our safety," says Khanum. “The local press is completely silent. The women who were brave enough to come forward will now no longer do so if this campaign against us goes on," Khanum says. Rashid says the families of some women are already pressuring them to quit. The KWC has around 20-23 members, but the five core members (Rashid, Khanum, Subreen Malik, Arshie Qureshi and Ambreen Shawl) are the most active ones. 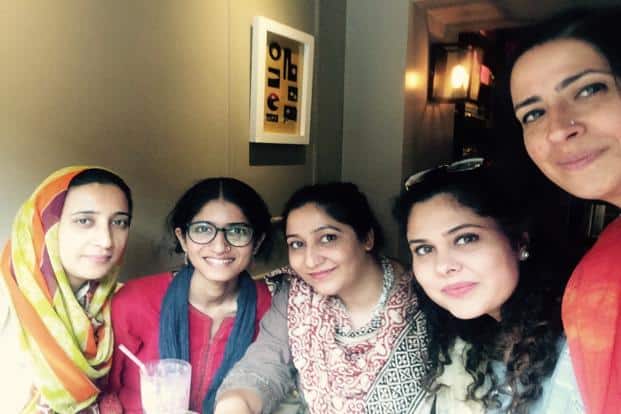 “In a conflict area, women’s rights have multiple layers. They are constantly asked which faction they belong to, whether pro-state or pro-azaadi, and the religious aspect also comes into play," Khanum says. Not one woman in Kashmir, she says, will name her abuser, unless she is given the protection of anonymity.

Soon after, he put up a FB post, without naming this reporter, filled with allegations and threats. “There will be no mercy shown to pro-statist groups," he wrote.

But even though the fierce battle the KWC is fighting sometimes exhausts them, not all hope is lost. In her immediate circle, Khanum says men are now willing to be more careful about the way in which they speak to women.

“This movement is driven by social media but there’s a lot of people the movement has not reached. The more the number of people come on board, the more visible change we can see on the ground," says Khanum.

“We are happy we are able to initiate that change," she says.

A line from the previous version of the copy has been redacted to protect the identity of the anonymous woman cited in the story. The version should have also said that she narrated her account to Rashid after the trust published a list of alleged sexual harassers.