It’s time to talk about the collarless dress shirt

Aband collar shirt is the kind of garment that turns fellows against each other—not so much something you wear as much as a litmus test.

Are you the type who finds it startling to confront a button-front shirt bereft of the familiar turndown collar? Do you think the design is neither here nor there, an awkward mash-up that’s too pointedly dressy to make perfect sense in a mellow context—but too laid-back to wear with a dark suit?

Or are you the type who is grateful for fresh alternatives to business-casual as usual, one who welcomes the band collar shirt as the more cosmopolitan brother of the Henley?

The style has been polarizing as far back as its history runs. Back in the 19th century, when most dress shirt collars were detachable, the band collar shirt was standard. But to wear them out in public could still provoke scandal.

Even today, it can read as a relic. Consider its other name, “grandad shirt", for a hint of its sepia-toned aura. This garment makes itself at home in closets stocked with tweed vests, newsboy caps, and other accoutrements occasionally resurrected by hipster mandolinists.

Lately though, designers have started transforming the band collar shirt into something more like a despatch from a streamlined future—a garment for Joaquin Phoenix in Her, sci-fi terrain in which the lines between the sleek and the nerdy have blurred permanently. The fabric in this pink Oxford-cloth model from Camoshita, for instance, gestures towards preppy tech workers bent on disrupting the rhetoric of tie-lessness. 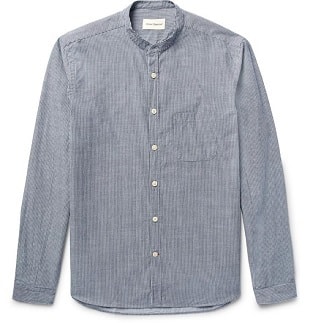 If you prefer to stay with the historical vibe, though, try the “subtle retro feel" of an elongated shirt from Cos. A more daring option is this finely striped Oliver Spencer shirt that summons a throwback vibe without descending into costume.

Other new designs, such as the contrast collar and mother-of-pearl buttons on this blue Todd Snyder number, tip the shirt in a more formal direction. Vivienne Westwood, the punk pioneer-turned-high fashion priestess, plays with codes of propriety by even offering a number with removable collar and cuffs. 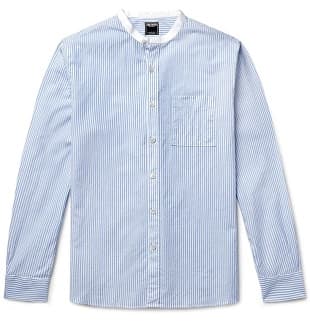 Maybe you have the right personality to wear one with a lightweight suit, loafers, and no socks. If so, throw on a chambray model and have a good time at brunch. Bloomberg