Insomniac City: New York, Oliver And Me, Bill Hayes’ fourth book, and his first in eight years, is simultaneously utterly odd, thoroughly heart-rending, and nourishing for the soul. And doubly so if the reader has anything like a passing acquaintance with the city of the book’s title, New York.

Eight years ago, following a tragedy that just breaks your heart, Bill Hayes moved to New York from San Francisco. And instantly began to discover a city in ways that only those who move to, and not hail from, cities can ever hope to achieve. The trains “never stopped running like my racing mind at night", he writes. It is a warm, familiar, timeless image that draws you into a book that is full of warmth and images. 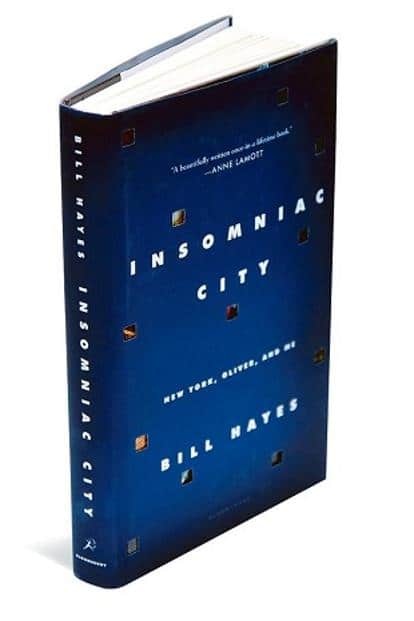 Insomniac City is odd in that it is not about one thing. It is about, so says the cover, three things: New York, Oliver Sacks and Bill Hayes himself. It is also odd in that it is a book that incorporates three formats: photographs, memoir and journal. The effect is to give the book, so to speak, three focal lengths, each more intimate than the other.

The photographs, all taken by Hayes and all quite wonderful, capture the very things about New York that entrance many first-time visitors who are there not just to look at the city but also see it—park benches, trees, people, shadows. Feet. A man waiting to get into a fashion show. Lovers on the grass.

In these pictures Hayes captures exactly what goes through our minds sometimes when we first visit a new great city. We look at people and wonder: What are they thinking about? Do they know how great their city is? How is the city great to them? Are they as struck by wonder as we are? Do you feel Berlin is as awesome as I do? New York? I wanted to stop passers-by in Istanbul and ask them: Aren’t you driven mad by all this history all around you all the time in the streets you walk, the food you eat, the words you speak, the buildings you ignore? If you are that kind of person, then Insomniac City will instantly make sense to you. You will get its tone of urban wonderment that is both childish in its earnestness and thoroughly wise in its universality.

But this book is about other things as well—the most important of which is Hayes’ relationship with the best-selling writer and physician Oliver Sacks. Sacks, who died of cancer in 2015, met Hayes in New York shortly after the latter moved there. At the time, Sacks had not yet come out about his homosexuality. But then, as he writes, Hayes realized that Sacks had little reason to: “He hadn’t had sex in three-and-a-half decades, he told me. At first, I did not believe him; such a monk-like existence—devoted solely to work, reading, writing, thinking—seemed at once awe-inspiring and inconceivable. He was without a doubt the most unusual person I had ever known, and before long I found myself not just falling in love with O; it was something more, something I had never experienced before. I adored him."

I recently asked Hayes, over a Skype call, if his relationship with Sacks would have panned out differently if they had met somewhere else and not in New York. Hayes, who speaks like he writes—gently and with an economy of words but not emotional content—said New York probably had a huge influence on his relationship with Sacks: “The city you live in, or the neighbourhood you live in, has a huge impact on how you live your life. And New York, the main character of my book, influenced my relationship deeply." Hayes said he was falling in love with New York at the same time that he was falling in love with Sacks. “And my joy in New York reawakened his interest in the city." Sacks, who had by then spent 40 years in New York, bonded with Hayes as he showed the recently heart-broken parts of the city that resonated with Sacks himself.

While Hayes writes about his relationship in the memoir sections with great tenderness, it is in the reproduced snippets of a journal that this relationship, this “Oliver and me" aspect of the book, hits its purest notes. An excerpt given below.

I stop by O’s to bring him an ice cream bar. I mention I saw fireflies in Abingdon Square Park—fireflies!

O: “Did you keep your mouth shut?"

I: “What do you mean keep my mouth shut?"

I am laughing, but he is not. I really cannot tell if he is serious.

O: “I don’t want you to die of fireflies...A luminous death!"

Hayes told me that the book captures two aspects of his own personality, a dichotomy that was magnified and sharply delineated by the city of New York itself. On the one hand, there was Hayes’ personal life—in the apartment with Sacks, devoid of all technology from television to computers and mobile phones, where the two men read, wrote, thought and spoke to each other. On the other, there was Hayes the photographer, thumping the streets of New York, seeking out new people and strange places to photograph. It is as E.B. White wrote in his famous essay on the city: “New York blends the gift of privacy with the excitement of participation."

Insomniac City is a singular tribute to that particular notion of the great city as a place of both intense solitude and relentless engagement. And no city, perhaps, achieves this quite as frenetically as New York.

This is a remarkably easy book to read. Hayes writes with great gentleness. It is a gift to be able to write about the greatest city on the planet, the capital of the world, in prose that is so becalming. It is also a book about the truly remarkable soul that was Oliver Sacks, a man who wrote all his wonderful books about life and death and the mind with a pen on paper, refusing to use a computer or a mobile phone.