Indian Railways in the 1990s: The secular Kumbh Mela

The great Indian rail journey was a shared national experience. The 1990s was its last great decade before low-cost airlines changed the way we travelled

The first time I saw Mumbai, like the first time I saw Chennai, Delhi and Kolkata, was from a train window. It was 1993, and Ganesh Chaturthi had just begun. I disembarked at the Mumbai Central platform, battered suitcase in hand, and gaped at the bustle. It was a moment immortalized to cliché in countless Bollywood films—the bumpkin arriving in the metropolis. It was also the real, lived experience of millions of Indians going to the metros.

Until 2003—the year the country’s first low-cost airline, Air Deccan, launched operations and India literally took flight—only Indian Airlines flew in most of the domestic sectors. Small towns, especially in the North-East, got Vayudoot flights, but the airline had maintenance issues; the newspapers occasionally had stories about problems such as engines failing and doors flying off mid-flight. Someone called it Yamdoot (messenger of death) and the name stuck.

Those unable to afford the adventure of flight, or unwilling to tempt Yamdoot, travelled by train. The great Indian rail journey was a shared national experience. It was much more than the mere matter of getting from Point A to Point B. It was, like the Kumbh Mela, a dip into an ocean of humanity. The 1990s was its last great decade.

It was a time of tumult, when the world around us was changing. The Cold War had just ended, India’s economy had recently been liberalized, and the times when fathers booked Bajaj scooters when a son was born—so that his turn to buy the scooter might come by the time he was 18—were over. The 1990s was the decade in which eternal India, the India of unchanging aspect, passed into history. It was the decade when the romance of the “mere paas ma hai (mother is with me)" hero finally gave way to the romance of the “mere paas bangla hai, gaadi hai, bank balance hai (I have a bungalow, car, bank balance)" hero.

The Indian train journey in the 1990s reflected this transition. Signs of change were evident in its unwritten rituals, which everyone in the country was familiar with. You went to the chaotic railway station in an old black and yellow Ambassador taxi, or perhaps an autorickshaw. On reaching, in the early years of the decade, you were immediately besieged by coolies in red tunics and dhotis. You haggled; they picked up your wheel-less luggage even before you agreed on the price, piled it on their heads, and led you at a surprisingly rapid trot through the masses of people at the station. Somewhere along the course of the decade, wheeled luggage began to appear; the rollaboard suitcase, which is what most of us now use, was invented by an American pilot in 1987.

The coolie knew which part of which platform you needed to go to. If the train was already there, he loaded your luggage on to it. This is when you had your first encounter with fellow passengers. It was an important moment. Were you in the coach with the family with the squawking baby, or the wedding party that seemed to have booked out the whole coach minus your seat, or—lottery—the pretty girls?

Perhaps they had already got there before you, placed their luggage in the good spots beneath the seats, and secured them with chains and locks. Now they might blithely ignore you as you sweated to find a place for your metal trunk and cloth-covered VIP suitcase. The ice would be broken with the first passive-aggressive question. “Aap ki kaunsi seat hai (which seat is yours)?"

Once everyone’s luggage had been packed away into every conceivable space, and the train started moving, the atmosphere would change suddenly. The same people who had been unhelpful and suspicious moments ago, would initiate friendly banter about the intimate details of your life. Where were you going? Why were you going there? Who was that with you, the other person who had climbed on to the upper berth? Were you married? Was that person married? And so on.

This was the world before smartphones and laptops with wireless Internet helped us escape from the here and now; the first mobile phone call in India was made in 1995, also the year the Internet arrived. Until the late 1990s, you still inhabited the space around you. Merely burying your face in a book was scant protection; your fellow passengers would probably want to know if the book was good, and why you were reading it, and so on. The Walkman was the “I’m too cool to talk to you" gadget that 1990s kids sported. Plugging in headphones was a possibility, and in combination with a book, would give you some respite, and mark you out—especially if you were a guy—as the rich, antisocial yuppie in the compartment.

If you were fortunate, your interrogator might be amenable to distraction by a less socially disruptive move, such as a card game, a round of antakshari, or a chai break. An entire army of hawkers, all grass-roots private entrepreneurs, worked every train, and the chaiwala was the most important of these personages. He boarded the train with his sooty kerosene stove packed inside a tin can modified into a carrier, atop which sat a kettle with its bubbling cargo of hot, sweet, milky tea. Instead of the earthen kulhad and chipped glass of doubtful hygiene, in the 1990s he served the tea in a disposable white plastic cup that was considered an example of the improved, modern way of doing things.

Outside the window, beyond the squalid edges of the city, the countryside settled into scenes largely unchanged for centuries. A lone farmer driving a pair of bullocks to plough a field. A hut. Scarecrows with upturned earthen pots for faces. Scattered cattle grazing. Walls painted over with advertisements of desi sexologists. Ragged, smiling children. A line of trees. Cycles, bullock carts, and a new sight: the fresh-from-Japan 100cc motorcycles at a level crossing.

The landscape changed as the train made its way through the country. Local peculiarities made their presence felt on board in the shape of changing menus of hawkers, changing dresses, changing songs of mendicants.

The trains from Guwahati to Kolkata had the best buskers. As the Kamrup Express made its way from Assam into Bengal, ticketless local passengers and hawkers would begin to make an appearance. Cries of “muri, jhaal muri" and “chai, garam chai" would become more frequent, only to be interrupted by the sudden twang of a dotara, the jhanak of ghungroos, and a raw voice steeped in the sound of the countryside rising in song.

Bengal was where Baul singers, with their philosophical ballads couched in earthy metaphors, sang their way through passing trains, earning coins from passengers for their lively performances.

The journey from Delhi to Guwahati was hard. The North East Express and Brahmaputra Mail both took days to cover the distance of about 2,000km. Delays were common, and instead of the official 36 or 42 hours, you might end up inhabiting the train for at least half a day more. There were tales about times when someone had spent three days on the train, reached Guwahati—then wracked by the United Liberation Front of Asom (Ulfa) insurgency—hungry and tired in the middle of the night after everything was shut, and been forced to sleep on the platform until the next morning.

But all this was taken in stride. For India in the 1990s was a country at war with itself. There were serious insurgencies in the North-East, Punjab, Kashmir and Tamil Nadu. There was strife over the Babri Masjid and the Mandal agitation. Journeys were prone to disruption.

This made the platform more than merely a place from which trains departed or at which they arrived. Platforms were veritable villages. On them, you would find people sleeping, cooking, eating, and even bathing. One of my friends once had his pants stolen while taking a bath at Mughalsarai station in an attempt to beat the heat of summer. 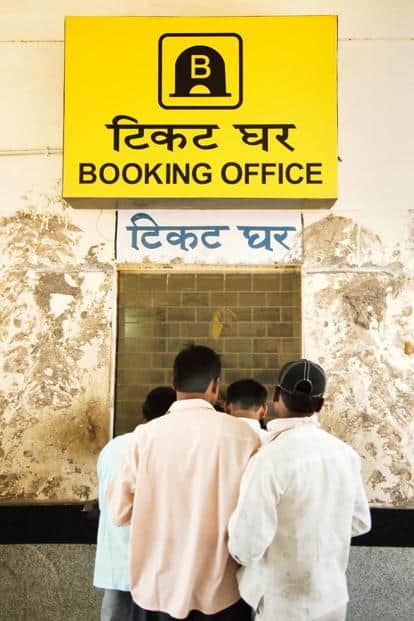 One time, arriving on the platform to take the train from Delhi, I was shocked to find a crowd entirely on its feet. The whole platform was packed to standing room only. I spotted a man in the black coat of the travelling ticket examiner (TTE) and asked him if the crowd was all for one train. He laughed sinisterly and walked off.

When the train arrived, the entire crowd pushed and shoved to make its way in. We had reserved our seats months ahead, but the reservations counted for zilch. Two of my college friends, with whom I was travelling, managed to get on the train. My suitcase got in but I didn’t. The train began to move. Emergency chains were pulled; a lot of passengers like me were still waiting outside.

It took another half-hour for the remaining passengers to board, after which there were literally people hanging from the ceiling fans in the reserved second-class sleeper coach. There was no space to put a foot down without stepping on someone. The Western-style toilet had been locked from the inside, and whoever was inside was not coming out. It was a whole room with a place to sit. Such luxury!

It turned out that Eid, Diwali and Chhath Puja had more or less coincided. The North East Express passed through the densely populated plains of Uttar Pradesh and Bihar and had been taken over by hordes going home on holiday.

After some hours, I found a place to sit on my own reserved seat. After the train crossed Patna, I was finally able to lie down on the lower berth. Then the train stopped in what seemed to be the middle of nowhere. A man climbed on and began to scatter hay in the space between the seats next to me. He did not respond to questions. He simply finished his task and vanished. A short while later, one goat arrived to start feeding on the hay, closely followed by the rest of the herd. The goatherd followed contentedly.

He was deaf to the protestations of passengers. The TTE was called. The TTE asked him for his ticket.

“Ka ticket?" he replied. “What ticket? This is the janta’s (public’s) vehicle."

In India in the 1990s, the train was the vehicle of the janta and his goats, the mai-baap sarkar, and everyone else too. The long train journey was the secular Kumbh Mela where India met itself.

■Baul music on the trains through Bengal

■ ‘Jhaal muri’ and ‘chaat’ on the trains through Bihar

■ Coconut water on trains running through the southern states