From works by Jogen Chowdhury to Ravinder Reddy and Amber Hammad, the art on display at India Art Fair 2018 questioned established gender roles and patriarchy

One of the themes that particularly stood out at the 10th India Art Fair was seen in artworks that explored issues of gender equality and women’s rights. It may not be premeditated, but across galleries there were works that questioned established gender roles, attacked patriarchy or mocked the male gaze. In the post-Weinstein era, some works that were made long ago, assumed a new meaning and interpretation.

The theme of protest against the patriarchal society informs Amber Hammad’s works. A Pakistan-born artist who is now settled in Australia, she playfully distorts iconic works of western art to view them through the prism of Pakistan’s cultural and social mores. For example, a nude in Rene Magritte’s famous Dangerous Liaisons becomes a clothed woman in Hammad’s Almost Dangerous Liaisons. “I’m trying to understand the identity of a contemporary Muslim woman in the globalized urban culture of Pakistan and have recontextualised the western works by bringing them into the arena of Pakistan’s contemporary social condition," Hammad writes in an accompanying artist statement. The western works seen through, as it were, Pakistan’s gaze, potently bring home the conditions of women the world over in a male-dominated society. In contrast, consider the sexually-charged sculptures by G. Ravinder Reddy in which larger-than-life naked figures of women (made of fibre-glass and painted in bold primary colours) draw your attention. Reddy has stated they are not symbolical of specific women, but embody a certain idea. Their strong poses (for instance, the one reclining, looking daringly at the viewer; or the one sitting on a teapoy, with her legs slightly splayed) challenge and subvert the pre-established notions of what the ‘ideal’ Indian woman should be. The figures are not coy or demure; they are provocative, exhibiting a total lack of inhibition, functioning as a 21st century response to the erotic sculptures of Khajurao temples. “If there is no sexuality, there is no life. If we are celebrating life, sexuality is part of our life and culture," Reddy said in a video interview made by the India Art Fair team.

If Reddy’s nude sculptures are in-your-face, Jogen Chowdhury’s drawings (displayed at Sanchit Art gallery booth) have a more restrained quality. At first glance, the women, with their disproportionate almond-shaped eyes and thin lips, have a somewhat sinister look. But this gives way to an expression that suggests contemplation. One of the untitled drawings show a bare-breasted woman holding a human skull in her hand, inviting comparison to the famous scene in Shakespeare’s Hamlet, where he’s brooding on death while holding a skull. Arun Ghose, whose forthcoming book Of Rain and Shine explores Chowdhury’s life and art, writes of the extreme swings in his works, “from feeling interested in observing female bodies to his genuine urge to participate in organized protest against continuation of violence (on women) in the society in all its form." 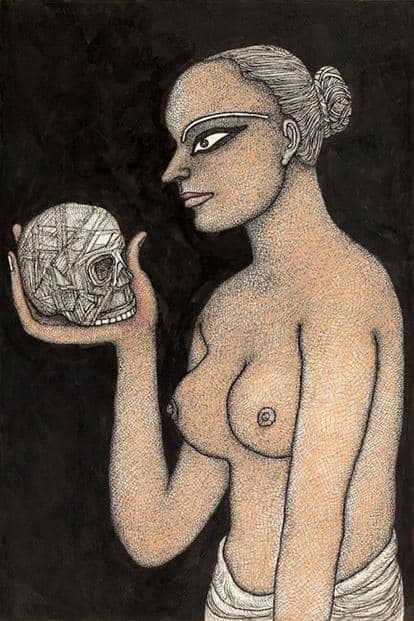 Victor Egan’s 1933 portrait of Amrita Sher-Gil, shows the avant-garde artist in languid recline with unshaved armpits. The photograph perfectly captures Sher-Gil’s rebellious spirit. As an artist who flouted established social and artistic norms; and whose work was preoccupied with feminist inquiry, she refused to cast herself in the Western mould of “ideal" feminine beauty. This photograph inhabits the collection of photos that belonged to the Sher-Gil family, which were on display at the Photoink booth at the fair.

Portrait of artist Amrita Sher-Gil, photographed by Victor Egan, 1933. Gelatin silver print with selenium toning, edition of 10, exhibited at Photoink booth at IAF 2018. This has been exhibited for the first time at the India Art Fair, 2018. Photo: Mint

Renowned artist, Yayoi Kusama’s The Shape of My Heart at the David Zwirner gallery booth, is full of abstract dark squiggles set against a bright orange background. James Green, the gallery director, points at the inherent tensions in the work between joy and melancholy. “It could be good, bad, sad or happy, maybe remembering a moment of heartbreak–she keeps things vague," he tells Lounge. It’s the first time her work has been exhibited in India.

The geographical sweep of the fair is wide. Five artists from Bahrain exhibited at the fair for the first time, which included three women artists, Balqees Fakhro, Mayasa Al Sowaidi and Lulwa Al Khalifa. Given the notorious perception of the state of women in the Arab world, the displayed works stand as a counterpoint to the usual narrative. The gallery manager said, “Women artists from Bahrain are very vocal, extremely well-educated and they have strong opinions–political and personal–and this reflects in their work".

Some would argue that art shouldn’t explicitly be “about" something–do art for art’s sake—one school of thought proposes. But the raw power of many of the overtly political or ideological works at the India Art Fair had the capacity to nudge the viewers to consider certain dialogues relating to gender and sexuality, which are painfully relevant in the modern world.