How Frida Kahlo made herself up

A collection of over 200 personal objects belonging to Kahlo, exhibited for the first time at Victoria and Albert Museum, offers a telling narrative of the Mexican artist

I will paint myself," Frida Kahlo (1907-54) once said, “because I am so often alone, because I am the subject I know best." Kahlo’s self-portraiture would go on to immortalize her as an artist to be reckoned with. She became celebrated for her revolutionary politics and artwork, her radical feminism, the poignancy of her story and how she refused to let adversity dim her fierce embrace of life.

That her personal life was far more intertwined with her art than reckoned, is the revelation of a new exhibition, Frida Kahlo: Making Herself Up, currently on at the Victoria and Albert (V&A) Museum in London.

It displays over 200 objects discovered in 2004 at Kahlo’s home, Casa Azul—now the Frida Kahlo Museum—in Mexico, in a bathroom sealed at the request of her husband Diego Rivera. It is the first time that her photographs, letters and dresses, alongside her medical braces and corsets, have been displayed outside the artist’s country. This was facilitated by co-curator Circe Henestrosa, who explored Kahlo’s distinct personal style in an exhibition for the Frida Kahlo Museum in 2012.

“These possessions are three-dimensional evidence of many things that we either knew or suspected about Frida Kahlo, from books and documentaries," says Ana Baeza Ruiz, the exhibit’s research assistant. “The objects complete and refine our understanding of her. They reveal her unique approach to art and life." Whilst the selfie generation ponder how genuine Instagram filters allow them to be, Kahlo was using her style to authentically portray the complexities of her life nearly a century ago. Her injuries, sustained during a near-fatal bus crash when Kahlo was 18, would plague her for the rest of her life, and define her art and her personal aesthetic.

Born to a German émigré father and mestizo (a Mexican who doesn’t identify as indigenous) mother, Kahlo grew up with an aesthetic that was simultaneously cosmopolitan and fiercely rooted in Mexico’s indigenous culture. The radical politics of the time also had a lasting impact on her— Kahlo would later claim she had actually been born in 1910, the start of the Mexican revolution.

Guillermo Kahlo taught his daughter photography, and how to pose; tips she later incorporated into her self-portraits. As she grew older, Kahlo adopted the cultural aesthetics of the Tehuantepec, a matriarchal society in the Tehuantepec Isthmus, a tropical rainforest in southern Mexico and a major centre for the pre-Hispanic Zapotec civilization. Their clothing, in particular, caught her eye—the reboza’s (traditional Mexican shawl) colour, the huipil’s (blouse) elegance, the grandeur of traditional Tehuana dresses—and it’s no surprise that the first recorded photograph of her wearing a reboza was at her wedding, taken in 1929.

Her clothes displayed her identity as a Mexican woman, and were often juxtaposed with her perceptions of “Gringolandia" (the US) in her art, which she visited frequently, first as a tourist, and later as a patient. At the exhibition, the 1932 Self-Portrait On The Border Line Between Mexico And The United States shows a marked contrast between the two countries. Mexico is vibrant, full of culture, and bursting with flowers; the US is muggy, mercilessly grey, and dominated by industry and chain-link fences. Kahlo’s pride in her country did not mean she wasn’t critical of it: her Mayan temple is broken and faded, half-buried in dirt. 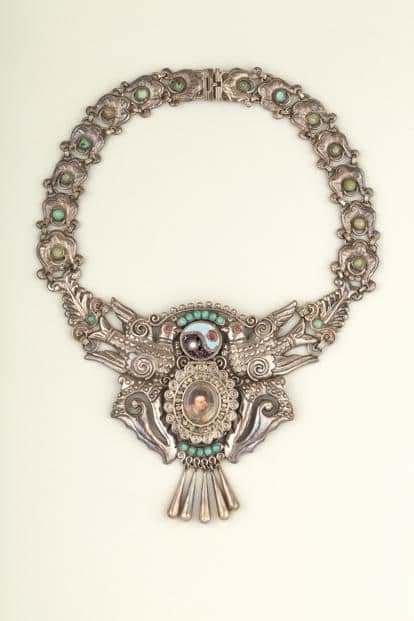 Particularly disturbing are the displays of the medical corsets that Kahlo needed to use all her life to support her shattered bones; crude harnesses made of cloth, steel spars, and what look like nails, their cold sterility transformed into colour and light with paint and symbols of personal conviction (one sports a painted hammer and sickle).

In The Broken Column, her anguish, which she once described as “...centuries of torture", is visible: her spine is revealed, depicted as a ruined Ionic column, and her flesh is pockmarked with nails. Also visible is her strength—her black-eyed gaze disconcertingly holding the eyes of the viewer from under that famous mono-brow. The photographs of Kahlo show her working through the pain. In some, she’s confined to a wheelchair, bedridden on other occasions; yet somehow still able to paint, despite suffering the consequences of numerous botched operations.

Certain objects in the exhibition convey her suffering to a degree that even her art cannot. One letter to a dentist friend has her begging for a Demerol prescription, the addictive opioid which helped dull the pain of her broken body. There’s a pair of beautiful red leather boots, embroidered with dragons; one is still attached to Kahlo’s prosthetic leg. She refused to be defined by her suffering, but neither did she ignore it; and in Kahlo’s response to her injuries and her deeply unhappy relationship with Rivera lies a moving story of astonishing resilience.

Nowhere is this more evident than the large, well-lit hall that is the last room of the exhibit. In the centre stands a large glass case containing all of her dresses: colourful Mexican blouses, Guatemalan coats, Tehuana dresses surmounted by a halo-esque light fixture. “We wanted to end with colour, optimism and joy," says Ruiz. “More than anyone else, Frida Kahlo lived to the full, and her garments, along with her own self-made image, make this very clear." On display also is Kahlo’s jewellery which is reflective of her taste rooted in Mexican culture. Ranging from traditional Oaxacan tarzales necklaces made of thick gold links, to chalchihuitl, Mayan jade necklaces dating from around 250 AD—excavated by Rivera and lovingly assembled by Kahlo’s hand—they were part of Kahlo’s palette.

As I left, I found myself in the museum’s gift shop, surrounded by Frida Kahlo merchandise. While aware of her face gazing at me from a potpourri of calendars, posters, and guide books, I was struck by how genuinely moving this personal insight into her life was; and how Kahlo was enviably authentic in everything she did.

“I paint my own reality," she once told her photographer and lover Nickolas Muray. Frida Kahlo did make herself up. The twist was she was always speaking the truth.

Frida Kahlo: Making Her Self Up is on till 4 November at the V&A, London (Vam.ac.uk/exhibitions/frida-kahlo-making-her-self-up).