Individuals, social enterprises and non-profits are trying to mobilise medical resources for care in remote areas 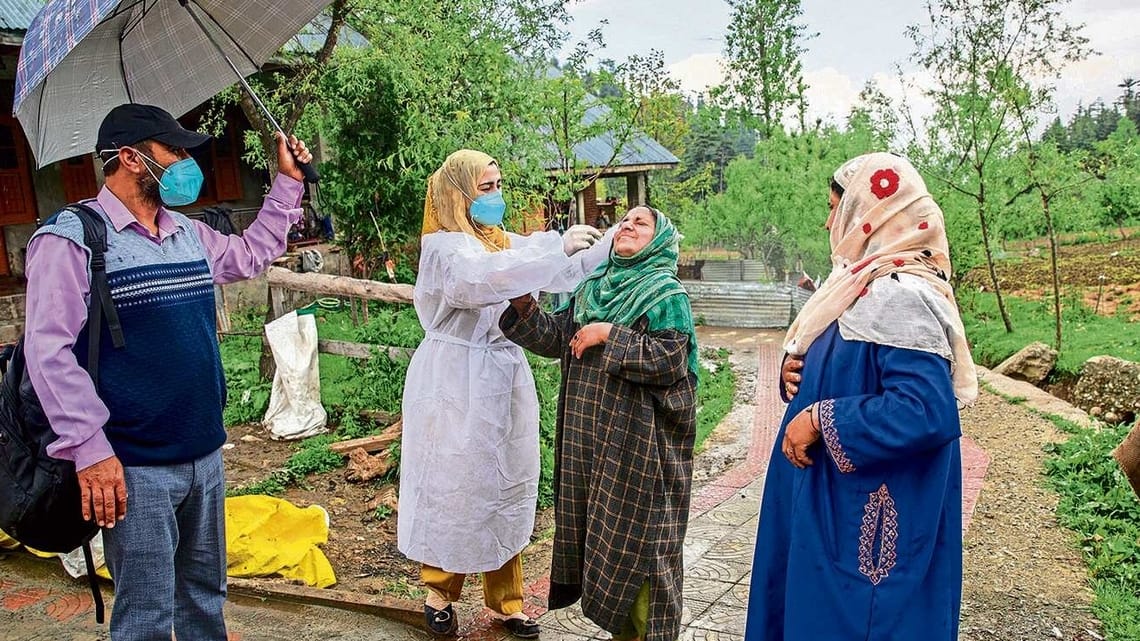 Testing for covid-19 in Budgam, south-west of Srinagar. (AP Images)

Three weeks ago, a 32-year-old father of three in Uttarakhand’s Mori tehsil died of covid-19. It was the first death due to the SARS-CoV-2 virus in the 92 villages surrounded by the picturesque Garhwal mountains, about 1,150m above sea level. It shook the community of 60,000 people.

“We have had quite a few infections this time, unlike during the first wave, when we were untouched,” says Shubhra Chatterji, co-founder of the Tons Valley Shop, an online marketplace that aggregates and sells organic produce from the valley. “Last year, covid-19’s effect was on our finances, as all of us in the village are dependent on tourism.”

This time, it’s different. She and her husband Anand Sankar, who live in Kotgaon village in Mori, also run the Kalap Trust, a non-profit for sustainable development. Since mid-May, they have been raising funds for two covid-19 care facilities—one with oxygen concentrators and one for isolation. The district administrator has provided two oxygen concentrators and the trust has raised funds for four more, with another two coming in as private donations for the primary health centre (PHC) in Mori. The intermediate college has been turned into a covid-19 care facility with five oxygen-support beds and they are in the process of setting up a 30-bed isolation facility nearby.

They have raised nearly ₹19.5 lakh so far but it’s an ongoing campaign that includes cooked food for doctors, health workers and families isolating at home. Chatterji has been organising a series of online lectures on local cuisines to raise funds. Friends across the country too are helping to raise funds through social media.

Urban India has been battling covid-19 for nearly 15 months. But in rural India, it’s the second wave that has really brought home the disease. This time, the virus has made inroads into remote, inaccessible regions with few healthcare facilities. Lack of access to technology and language barriers in some parts add to the hurdles. Building trust is a challenge.

Communities, non-profits and individuals are stepping in to help. For, while there’s no shortage of volunteers to create awareness about safety protocols, there aren’t enough resources for treatment—and there is a shortage of data. Without reliable data on what equipment and medicines are needed where, fund-raising could become meaningless.

In Mori tehsil, for instance, not all villages can be accessed by road; some require a two- to six-hour hike through the hills. Recently, the community lost a 42-year-old man to the infection. “We have divided the health staff into small groups, who are doing door-to-door testing daily in all the villages. The community and NGO mobilisation has definitely helped, as we are building infrastructure not just for the current wave but for the future as well,” says Nitesh Rawat, the Mori PHC medical officer. The taluk has recorded 500 cases so far, though Dr Rawat says the active cases (around 100) are coming down.

For villagers living within the core area of Madhya Pradesh’s Kanha National Park, the nearest PHC is about 20km away. The district hospital in Balaghat is more than 60km away. “Even if they did manage to visit the PHC to get an RT-PCR test, the results come five days later. The test kits are also less. By that time, it would be too late if the person’s condition worsens,” says Kedar Gore, director of The Corbett Foundation, which works with forest-dwelling communities and focuses on livelihood and health.

Worse, the disease comes with a social stigma. “So hardly anyone goes to the PHC even if they have symptoms,” Gore says. The doctors at the foundation, who have been working with the community for over a decade, are providing symptomatic treatment with five-day flu medication. They are also providing foodgrains door-to-door to villagers facing a shortage of food since the markets are shut.

Similarly, in HD Kote taluk in Karnataka, Mysuru-based pediatrician Dr. Shashak Gowda has been taking the help of ASHA and anganwadi workers and volunteers from villages to manage the spread. He raised ₹4.72 lakh from his network of contacts and purchased 20 beds, medication and PPE kits for the taluk hospital that covers about 25,000 people, earlier this month.

“We have given oxymeters and thermal temperature scanners to ASHA and anganwadi workers, who go door to door. The idea is to catch the symptoms early, convince people to get tested, and inform them about home isolation management,” says Dr. Gowda.

“In the first wave, people returning to their villages in Bihar were quarantined for two weeks in isolation centres. This has not been done properly this time. Rapid antigen testing has to be started with speed and scale in rural areas, followed by immediate treatment of positive cases. Block-level ICUs and small oxygen facilities have to be created. Many hospitals in far-flung areas are still without oxygen,” he says.

In the second wave, 76% of Bihar’s total reported cases are from rural areas, according to Union health ministry and covid19india.org data. This is where the IMA’s Aao Gaon Chale initiative, launched in 2004, comes in. “IMA has close to 500,000 doctors and 50% of them practise in cities but hail from rural areas. We have asked them to work for their villages in whatever way possible—supplying testing kits, sanitisers, and more,” says Dr Singh.

India has the advantage of a large number of volunteers in rural areas, says Pavitra Mohan, secretary of Basic HealthCare Services, which caters to 100 villages in southern Rajasthan. “But they need to be trained, supervised and supported to provide care for this disease.”

They have been working with Aajeevika Bureau, another non-profit, to educate people in their villages and send voice and text messages through WhatsApp in the hope that younger people will be able to disseminate the right information. “Collaborating with other organisations will definitely help us reach more people,” says Dr Mohan.

Also Read: How covid-19 is pushing businesses to move out of the metros

It’s a thought echoed by Ajaita Shah, founder of the Jaipur-based social enterprise Frontier Markets. Along with two social enterprises in Karnataka, Andhra and Telangana, they are forming a coalition to “firefight and create resilient communities”. The “major differentiator” will be the “existing supply chains, digital marketing infrastructure and feet on street catering to these four states”, Shah says. They hope to begin work by 1 June.

Over the past seven years, Frontier Markets has created a sales force of 10,000 women, the Saral Jeevan Sahelis, in 2,500 villages in Rajasthan’s Ajmer, Alwar and Dholpur districts. It works across Rajasthan, Uttar Pradesh, Haryana and Odisha to help women sell agri- and energy-related products, such as solar torches and mobile chargers, cook stoves, cattle feed and pulses. Since the pandemic, they have been supplying consumer goods too.

This network can be used more robustly, once the women are vaccinated, to disseminate information on masks, physical distancing and symptoms, and collect data on infrastructure needs, says Shah.

They have partnered with health organisations like Noora Health and ARMMAN to train them. But though they are willing to pay, they haven’t been able to organise the vaccines yet. “We need better support from the administrators to make the vaccination a reality,” says Shah.

Manpreet Kaur, one of the sahelis in Nangal Heera village in Alwar district, has been educating her community about home management of covid-19 as well as the need to get tested at the nearest PHC in Gasoli, 5km away, if someone has a cold or fever.

Kaur, who works closely with anganwadi workers, is fully vaccinated. “There was a lot of fear about the vaccination as there were a lot of rumours floating around, like people fell ill or died after taking it. So it was difficult but I would tell them that since I took the vaccine, I was proof that it wasn’t harmful,” recalls Kaur, who got the vaccine because she qualifies as a front-line health worker. She has managed to persuade 90% of the 45-plus age group in a population of about 1,300 to go in for the vaccines.

“Everyone wants to help but we don’t have any ground-level data. For instance, which PHC has how many doctors and paramedical staff, the stock of medicines, the needs of the region…this information is not available in a centralised database that we can access,” says Shah.

The first job, says H. Sudarshan, who has worked with Adivasi communities in Karnataka’s Chamarajanagar district for 35 years, is to educate people on the importance of vaccination. “That’s not an easy job. Most believe that a common cold, cough and fever can be treated with home remedies. How do we convince them about the dangers of this virus and its variant? It will take a concerted effort.”

(With inputs from S. Seethalakshmi and Rahul Nandan)