Only about 10% of Kauai is accessible, yet many big movies -- from King Kong to Jurassic Park -- have been shot here

Kauai? It’s the most beautiful of the islands in Hawaii. You must go there. It’s paradise," said a friend. Then he added, “Who are you going with?"

To be on the safe side, I took two books to Paradise.

Kauai, or the Garden Island, is the oldest of the main islands in Hawaii. The attendant at the rental car agency at tiny Lihue Airport handed me a map before telling me reassuringly: “Don’t worry. There’s only one freeway that wraps around the island. So you can’t get lost."

I promptly did. I was just trying to get out of the airport and missed the exit. I was too distracted by the chickens. I had not expected to see brightly coloured chickens scuttling around the airport’s parking lot.

There are many theories about this proliferation of wild chickens in Kauai. One says they are descended from chickens that escaped when hurricanes blew open hen coops. Another says Polynesians brought their chicken ancestors 800 years ago. Whatever the reason, the whole island feels like an extended “why did the chicken cross the road?" joke.

But the rental car lady was right. I was a long way from the speed blur of eight-lane highways of mainland US. Some of the bridges across rivers in Kauai are single lane only. A small sign politely says it’s customary to yield to five-seven cars at a time.

It had been a long time since I took a vacation without family or friends to a place without any family or friends. I got to Kauai armed only with tips from friends and Facebook acquaintances who had been there. Have the shaved ice. Have the shaved ice with the tangy dried plum topping. Stay in Hanalei Bay, it’s gorgeous. Don’t stay in Hanalei Bay, it’s too pricey. Go on that 12-mile hike along the coast. Swim in Puff, The Magic Dragon’s cave. Have a coconut latte. Drink a Bloody Mary on the beach at the Lava Lava Beach Club. Go to the Hindu temple.

The last one stopped me in my tracks. Kauai has a population of about 67,000—mostly Catholics, Pentecostals, Presbyterians and assorted other Christians. What was a Hindu temple doing there?

The Hindu monastery is just up the road from the Opaeka’a waterfall. If you reach the Rudraksh forest (yes, there is one), then you have gone too far, I was told. The Saivite monastery was set up in 1970 by Satguru Sivaya Subramuniyaswami, born Robert Hansen in California, a ballet dancer who became a Jagadacharya. It’s located in an Amar Chitra Katha-like setting, overlooking a lush rainforest, a cloud-wreathed mountain and a rain-swollen river.

The morning prayers were under way at the temple, which has a big sculpture of a Nandi bull in front. White women in kurtas told me in hushed voices not to take pictures inside. A man with dreadlocks chanted quietly next to a woman with a red hibiscus tucked behind her ear. A tall strapping Indian man, his forehead smeared with ash, led the puja. When it was over, he told one of the regulars, “Have a good one, Cindy."

In the distance, another temple was under construction. It was being built near Bengaluru and assembled in Kauai. The granite structure was being made entirely with hammers and chisels, just as temples were built 1,000 years ago. The chisels were of soft iron, their sharp points lasted just minutes against the granite before they needed to be sharpened again. “That’s why it’s taking a long time," said the smiling lady at the gift shop. She had rudraksh beads for sale, two for $15 (Rs960), from the mandir’s own rudraksh farm. It all felt familiar yet surreal, especially when I spotted the bearded white sanyasi with twinkling eyes, a Santa Claus in saffron, driving a jeep.

On my way out, I ran into a visiting Indian family. The Gujarati lady was elated to have found a temple in the middle of Kauai. “Where are you from?" she asked as she placed a flower on the Shanmugam murti. “Are your parents in India? Are you married?" I fled.

Kauai’s Eden-esque mix of forest, mountain and beach has made it the default tropical paradise for Hollywood. In the opening sequence of Raiders Of The Lost Ark, the famous Paramount mountain logo dissolves into a Peruvian mountain guiding Indiana Jones to the Chachapoyan temple. Peru was actually Kauai and that mountain, Mount Kalalea, is easy to spot. The forbidding green sea cliffs of the Na Pali coast, folded like a giant’s concertina and reachable only by boat or helicopter, filled in for Isla Nublar of Jurassic World as well as for King Kong’s Skull Island. That raptor nest the palaeontologist stumbles upon in Jurassic World is under the giant fig trees of Kauai’s Allerton Garden. That garden is also where Jack Sparrow looks for the Fountain of Youth in Pirates Of The Caribbean: On Stranger Tides. Bits of South Pacific, The Thorn Birds (a TV miniseries), Hook and countless other movies are scattered all over Kauai, although only about 10% of the island is accessible by road. 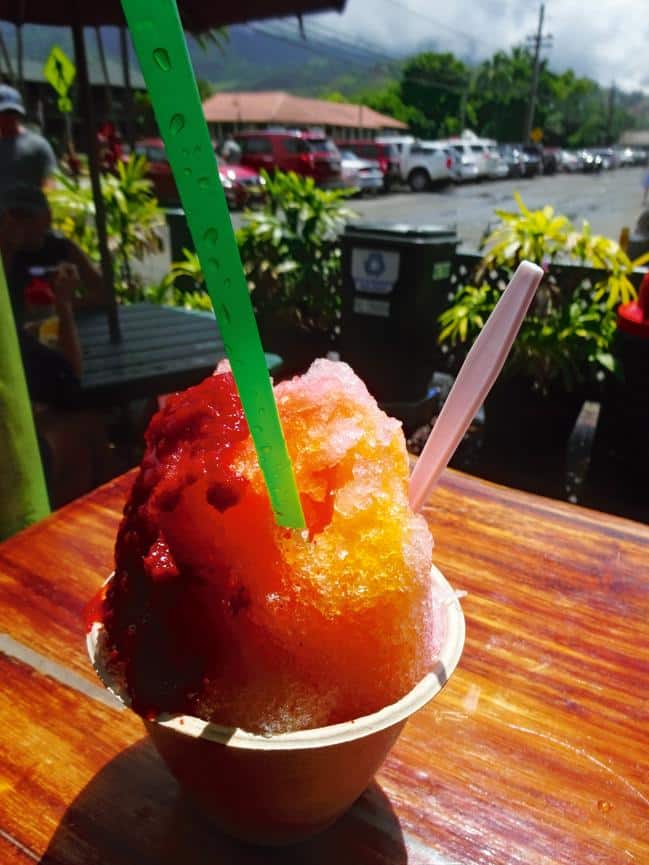 The much recommended shaved ice at Kauai. Photo: Sandip Roy

All that Hollywood trivia makes Kauai both entrancing and a little unreal. The seabirds nesting near the Kilauea lighthouse seem extra downy, the sunsets extra spectacular. The double-tiered Wailoa Falls cascade 85ft down in picture-perfect torrents, dazzlingly white against emerald-green cliffs as white terns fly around the spume. When the light is right, you can even catch a rainbow. The Chinese markets of Kauai still have quaint old names like Kong Lung, though they now house boutique jewellery stores and wine bistros for tourists.

But there still exist shards of an older, pre-tourist Kauai. I stumbled upon it almost by accident. Glass Beach is not one of the Hollywood-friendly beaches. It’s beautiful, like all beaches in Kauai, but in an industrial area, reached by a dirt road near drab warehouses and power plants. The water crashes over slippery black volcanic rocks. Near the shoreline are thousands of coloured pebbles, pieces of glass thrown out here and smoothened and shaped by the ocean over years.

On the ridge overlooking the beach are a few crumbling gravestones. When I climbed up, I found an enormous cemetery. The gravestones are old, eroded by the salty air, some covered with lichen, the Kanji letters faded. This is the Japanese cemetery of the workers at the long defunct McBryde Sugar Company, a reminder of the sugar-producing plantations and factories that shaped the history of Hawaii. Some graves have dried artificial flowers, a small pile of seashells, a blackened candle holder. Some have an empty beer bottle. Many headstones have toppled. The ground is littered with the needles shed by the ironwood pine trees around the cemetery. As I walked through the cemetery, the Japanese graves give way to Filipino ones and then to Chinese ones.

Few come here any more. But here, in this graveyard away from the tourist trail, in one of America’s earliest multi-ethnic states, these long-dead sugar plant workers with names like Hirakawa, Medeiros, Vales and Lee tell the bittersweet history of what it cost to build paradise.

Now they are part of its soil. The only sound here is the noise of the crashing waves and the wind in the trees. A seabird swooped. A dog ran along the wet sand. It felt timeless, the way a paradise should. It was the perfect place to sit under a tree and read a book.

Except I had forgotten to take mine.