Graphic novels: The way we grew up

Families are messy organisms, but these graphic novels by Alison Bechdel, Rutu Modan, Fumio Obata and others tell us that there is something universal about every one of them

I can’t comment on the bond between a woman and her mother; being male excludes me from that privilege. There’s nothing quite like it though, and I came closest to understanding it by reading the American cartoonist Alison Bechdel’s work. People who read graphic novels know who she is owing to a book she published called Fun Home: A Family Tragicomic, an autobiographical memoir about her childhood in a funeral home (hence the title) before and after her father committed suicide. People interested in cinema know who she owing to the Bechdel-Wallace test named after a friend and her, which examines whether or not films feature at least two female characters discussing something other than a male character. Apparently, even classics like the Star Wars and Lord Of The Rings series fail this test.

After Fun Home, Bechdel turned her empathetic eye to her surviving parent. The result of that line of inquiry was the sequel, Are You My Mother? It isn’t an easy work, and not simply because it is crammed with literary references, notes from seminal psychological texts and visual cues that compel one to go back and forth every other page or so. Bechdel closely examines her behaviour towards her parents and vice versa, obsesses over seemingly unimportant details, and religiously details private sessions with therapists, attempting to make sense of why she shares the kind of frosty rapport with her mother that she does.

A section from ‘The Property’.

Japanese-born, London-based Fumio Obata uses his skills as a comic book writer and illustrator to deal with parental expectations too, in Just So Happens. He does this with a female protagonist called Yumiko, who lives and works in London and is suddenly compelled to visit her homeland after being informed about the death of her father in a mountaineering accident. What follows is a slow epiphany for Yumiko, who relives her childhood with her father and divorced mother, and comes to question everything she thought she knew about the country she once called home. Obata’s skill lies in his spare illustrations which, like so much Japanese art, manage to convey a lot with the use of very little. Yumiko learns to look at her relationship with her deceased father and living mother anew, and returns to London free of the baggage that weighed her down at the start of the book. 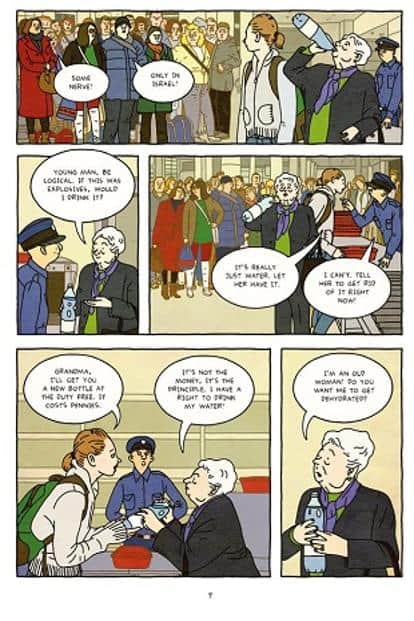 A section from ‘Just So Happens’.

One of the prettiest, most evocative examinations of family life comes from the English illustrator Raymond Briggs who, in Ethel & Ernest: A True Story, pays tribute to his late parents in a manner each of us would love to if we were blessed with an ounce of his talent. This seemingly uneventful memoir is made powerful by the sheer ordinary nature of its protagonists’ lives in a simpler time. Briggs records it diligently, from the moment they meet to their shy courting, long marriage, his birth and childhood in the shadow of war, and their eventual deaths within 12 months of each other. It is moving, shot through with poignant remarks about middle-class life in Britain and panels of vivid colour and subtle humour. Ethel and Ernest were married for 41 years, and the book was eventually turned into an equally beautiful animated film in 2016.

Then there’s Rutu Modan, the Israeli graphic novelist who uses a seemingly simple tale about inheritance to ask some big questions about families and the secrets they all tend to hold. The Property is about a young woman called Mica Segal, who visits her grandmother in Warsaw in order to help her reclaim an apartment building that was confiscated from the family during World War II. The relationship between grandmother and granddaughter is not a happy one, but Modan uses her expressive drawings to tease an enormous depth of feeling from her characters. It is plotted like a thriller, and gripping from start to finish.

Families are messy, intricate organisms rather than stable, predictable social institutions. What these graphic novelists from around the world manage to teach us with their critiques of their personal units, however, is that there is something universal about every family. They may all seem different, but the nods of recognition they routinely spark within us are often the same.