Going viral in the village

A video on the popular YouTube channel Country Foods (over one million subscribers) opens with a gaunt lady, Mastanamma, smiling at the camera. Now 107 years old, probably the oldest YouTuber in the world, she remains spry, the twinkle in her eye unmistakable. As she sits in a paddy field in the village of Gudivada, in the Krishna district of Andhra Pradesh, Mastanamma deftly prepares ingredients for an emu egg fry, chopping up herbs and sorrel leaves. As the viscous liquid bubbles away, in a wok placed on a wood fire, she grins into the camera, satisfied with the day’s cooking. This simple video has garnered 2.6 million views. The most popular one shows her cooking a marinated chicken in a watermelon shell. This is dum cooking at its unique best. The video went viral as soon as it was put up on YouTube last year, and has so far garnered 11 million views.

Not far from Gudivada, in a small village in Telangana, resides the creator of another popular food channel, Grandpa Kitchen (3.1 million subscribers). The creator doesn’t want to disclose his name, preferring to go by the channel’s moniker. Sitting over only a wood fire, this septuagenarian prepares things we’d expect: okra kurkure and fish fry, for instance. But he also makes food you’d be more likely to see in a commercial hub in Gurugram or Bengaluru: Oreo milkshakes, double cheese burgers, potato wedges, all cooked on that same wood fire. A video he posted a year ago of him making chicken pizza without an oven garnered 15 million views.

They come from villages and small towns across India, and are taking the internet by storm. They key seems to be the innovative use of hyperlocal ingredients: snails, bugs, eels, quail eggs, offal. The videos also have a rustic charm, which is a pleasant contrast to the overproduced, tech-heavy content you increasingly find online, leaving viewers with that sense of discovery, of stumbling upon something intimate and home-made.

Satya Raghavan, head of entertainment, YouTube in India, says this vertical, now called “village food", first appeared in 2016. The trend really took off in early 2017, as more content came in from rural India. “We realized that many people from remote villages were turning to YouTube to post videos cooking authentic local food," Raghavan says. “What’s fuelling the growth is the meteoric rise of the creator base. While in 2014, there were only 16 YouTube channels with more than one million subscribers in India, today there are over 300 passing that milestone. And we are adding two more almost every single week." Twenty of these are food channels, three of which are village food-related. Grandpa Kitchen is the No.3 online food channel in India.

The popularity of these videos is testament to how media is transforming in India today. Of the 450 million Indians connected to the internet, 390 million are active internet users and 230 million are “language users" (KPMG Language report; State of Mobile Internet Connectivity 2018; YouTube channel analysis)—users who prefer to use Indian languages other than English primarily while online. Ninety-five per cent of video consumption in India is in vernacular languages, and the number of rural internet users has increased four-fold since 2012, according to the KPMG language report. 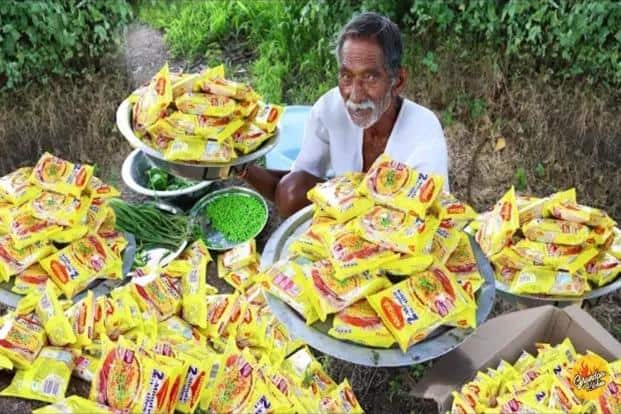 Many of the creators have unusual life-stories, which becomes part of their appeal. For instance, Punjabi Village Food Factory is run by husband-wife Parvinder Singh and Sarabjit Kaur, based in Bhagalpur, Haryana. While Kaur faces the camera, Singh works on the technological aspects. Singh, a mechanical engineer, and Kaur, who used to work in a hospital as a computer operator, started the channel in December 2016. Kaur would often turn to the internet for recipes, but hardly found anything she deemed authentic. So she set up her own channel offering traditional Punjabi recipes. Sometimes shot in villages, at other times on the terrace of their home, the rustic videos have found an audience in the UK, US, Canada, Australia and Pakistan, all places with sizeable Punjabi populations. Their most popular videos are for aate ke laddoo, bua ke kadhi pakore and karele ki sabzi, getting over 1.5 million views each.

Village Food Factory (over 1.9 million subscribers) began with a son wanting to make his father famous. A resident of Theni district, Tamil Nadu, Arumugam Gopinath found it unfair that his family was struggling when his father’s brothers were well-off. After working for a couple of years in Chennai on small-budget films, he thought of using the skills he’d acquired to start a food channel for his father, Jaymukh, using authentic recipes and local ingredients. The recipes are big, exaggerated. King of Chicken Legs, which has garnered 17 million views, has 2,500 eggs and 10kg chicken cooked in a single pot. They have an egg curry made with 300 eggs, full goat gravy, and more. “The idea is to preserve our family recipes and also teach viewers dishes that would otherwise be isolated in the countryside," says Gopinath.

This was why Srinath Reddy and Laxman K. started Country Foods with Mastanamma. Living in Hyderabad, one worked as a video editor for a regional news channel and the other as a graphic designer. After seeing the number of views each recipe video got, they decided to start something on their own. On a visit to Gudivada, they decided to post a video with Mastanamma, and it went viral. “Her story really appealed to people," says Reddy. “She was 16 when she got married, and has stayed in this village ever since. She has five children, and earlier used to work as a daily wage labourer in paddy fields. She doesn’t know the tech terms, but was really fascinated by the idea of doing a video. It is only now that she has begun to realize just how popular she has become!"

To cater to an audience that may not understand their language, creators refrain from too much dialogue. They get calls from all over the world, lauding their content and even requests for training.

The revenue generated from these videos has led many to quit their jobs and do this full-time. Some have managed to earn more than ₹ 1 lakh a month. They are also mentored by experts at YouTube regularly, through workshops and online resources at the Creator Academy. “We have offers from Australia to start a hotel there, and also from the UK. But we don’t want to go anywhere. We want to keep doing what we love, right here in our hometown," says Singh.