Men look at women. Women watch themselves being looked at—this John Berger aphorism sums up a majority of the writings by the brilliant English art critic, who based his observations on visual history ranging from Renaissance paintings to contemporary advertisements.

The politics of representation of women in art and photography has been fraught with all manner of problems long before #FearlessGirl and #MeToo became global hashtags. I’ve been a big fan of The Guerrilla Girls, a group of anonymous feminist activist artists who show up wearing gorilla masks in public and use data, humour and outrageous imagery to expose gender bias in politics, art and pop culture. One of their posters about female representation at the MET asks, “Do women have to be naked to get into the Met. Museum?" Illustrated with a visual of the classic 19th century nude La Grande Odalisque (with a gorilla head, of course), it states: Less than 5% of the artists in the Modern Art section are women, but 85% of the nudes are female.

Certain industries—advertising, pornography, fashion—bear a greater burden of guilt than others. Which is why it is interesting that a new exhibition celebrating the female gaze is curated by a former Vogue and Maxim photo editor, Iona Fergusson, who has spent close to a decade commissioning portraits, fashion and beauty editorials.

Opening this weekend at the Punjab Lalit Kala Akademi in Chandigarh, before it travels to Delhi and London, Girl Gaze: Journeys Through The Punjab & The Black Country, UK is categorically a project “about women by women", says Fergusson. It is a photographic exploration drawing parallels between women from Punjab and the UK’s “Black Country" area, which has one of the largest Punjabi diasporas.

A striking work from Delhi-based photographer Uzma Mohsin’s series Love & Other Hurts is a portrait of a second-generation immigrant—a tattooed woman sporting an edgy hairdo with mermaid-blue hair swept to one side, with the other half dyed in a leopard pattern. “Birmingham, where she’s from, has a thriving metal scene," says Mohsin over the phone from Chandigarh. The woman’s personal style is a canny metaphor for acquired taste marrying an inherited aesthetic. Mohsin plans to exhibit her 60 photographs with interwoven threads symbolizing the Phulkari embroidery work synonymous with Punjabi women. Another photographer, the UK’s Jennifer Pattison, is interested in magical worlds that find expression in the traditions of the Punjabi folk festival Lohri. Her fine art photographs, titled Rice Pudding Moon & The River Of Dreams, are inspired by songs that tell of a mother’s love and a land of dreams. 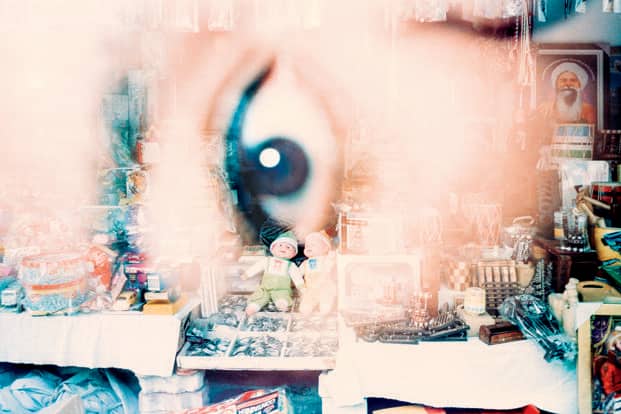 “We were interested in exploring the impact that immigration had on the women...the restrictions on freedom, agency and their own bodies," says Fergusson.

She admires the work of South African photographer Zanele Muholi, for daring to increase the visibility of the black LGBTQ+ community in a country where women are killed for their homosexuality.

While it was on Fergusson’s agenda to commission women photographers who would explore diverse themes regarding gender, identity, patriarchy, tradition, culture and memory, she was also keen to highlight relatively lesser-known names. Her curatorial mission was to present photographs in which the subjects had agency and participated actively in image production. “It was important to prevent the phenomenon of Other-ing," she says.

Mohsin’s series does this very literally: A bulk of her photographs are multiple exposure works. She first handed over film cameras to her subjects in the UK (mostly older Punjabi immigrant women) and asked them to photograph objects and scenes that represented them. Simultaneously, she recorded their oral narratives and memories of the places they had left behind. Then, following their stories, she made her own photographs in Punjab, using the same film rolls. “With multiple exposure on film, it’s always a bit of serendipity. Some worked and some didn’t... but it was great to have the subjects so intimately involved with the process," she says.

Rather than pretty pictures and domestic scenes, the exhibits in Girl Gaze create layered images that go beyond the purely personal to comment on the impact of migration and cultural cross-pollination. It is a reminder that when girls look at girls, they paint big pictures.

Girl Gaze: Journeys Through The Punjab & The Black Country, UK will premiere in Chandigarh (10-18 March), then travel to Jalandhar (23-27 March), and, later in the year, to Delhi, London and Wolverhampton.

The writer tweets at @aninditaghose