Garry Kasparov on the era of machine intelligence

In a new book, Garry Kasparov takes a fascinating look at the human mind through the lens of chess computers

The date was 9/11, exactly six years before the twin towers of the World Trade Centre in downtown Manhattan were razed by invading planes. Garry Kasparov sat down to defend his title in a world chess championship match against Viswanathan Anand on the 107th floor of the South Tower.

Going into the 20-game match, Kasparov was the outright favourite, but, at the same time, the Indian challenger was clearly the strongest in the past five years to take on the invincible Kasparov. For an underdog, Anand started well, holding Kasparov to eight straight draws. And as the “timid stretch of draws continued, pundits began to wonder if I’d lost my touch", Kasparov writes in his latest book Deep Thinking: Where Machine Intelligence Ends And Human Creativity Begins—a study on the human mind through the lens of chess computers.

“And, honestly, I was getting a little worried myself," writes Kasparov. “A stretch of poor play can get you to start second-guessing your own decisions, leading to more poor play." Honest confession of a chess champion struggling with performance anxiety.

This book is a good read for those interested in chess and Artificial Intelligence, where Kasparov maps the progress in machine learning and makes a case for backing technological advances to augment human capabilities. By 1995, Kasparov had already started to take an interest in examining if machine intelligence could help humans play better. Though, at that time, their evaluation capabilities were not as developed as they are now, chess computers could store huge databases that could be mined to map the opponent’s strengths, weaknesses and natural preferences. 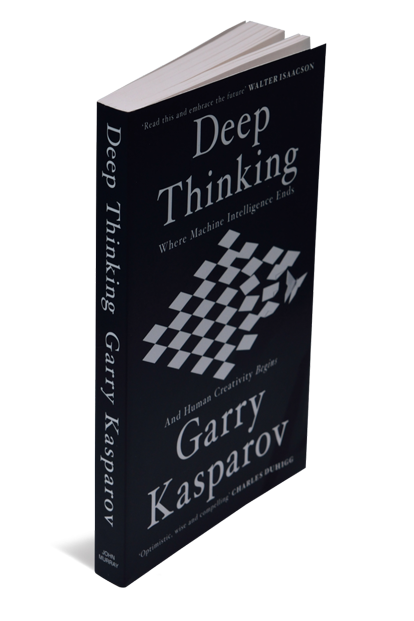 It is hardly surprising that his team of seconds—or grandmasters who assisted with the preparation—for the match against Anand, included a chess computer. A software called Fritz 4 was included to be used as “a sort of fact-checking calculator", Kasparov reveals in his book. “We didn’t trust it with anything strategic, but it could be a real time-saver to work out extremely tactical positions without risking silly oversights."

Little did he know then that he would owe, even if in a small measure, his victory in the match to the brute computing force of Fritz 4. After the series of eight draws, the computer’s analysis helped Kasparov fine-tune his strategy for game 10, “hammering out incredibly complex tactics" that followed a daring deviation from what he had played before".

This preparation was for Kasparov to play with white pieces, and in game 9, he had black. The world champion was so “distracted" with his “wonderful idea", that “it felt like an annoyance to have to play another game before I would be able to spring this dazzling new idea on Anand and the world". The result: the challenger played “very strongly" to win game 9, and seized the lead.

“I was so wound up that when the arbiter accidentally dropped the clock on the board with a bang, I jumped and covered my face for a moment," Kasparov writes, fondly recalling what happened next. “To my great relief, Anand repeated his opening as I had hoped...and I varied from game 6 on move 14."

He decimated Anand in game 10, and made a spectacle of it, rushing through the rest of the game to draw even at the half-way stage. And Kasparov seized the initiative as the mood within Anand’s team swung from jubilation to dejection in the space of a game.

Within two years of that match, Kasparov faced a similar rout at the hands of IBM’s Deep Blue, a supercomputer. At that time, this was even more embarrassing than losing to a human opponent. For the first time, a world champion was beaten by a machine, and IBM’s shares gained $11.4 billion in market value in just one week.

Kasparov played way below his potential despite starting the six-game match with a win. In the past two decades since Kasparov lost to the supercomputer, chess playing algorithms have become so smart that it is impossible to beat them, at least in long drawn-out matches since machines do not have emotions, do not rely on their cognitive abilities and they do not get tired.

Over the past 30 years or so, a lot of sweat and money have been invested to improve their evaluation capability and the brute force of number-crunching. Deep Blue could evaluate an astounding 200 million positions per second. In 2003, Kasparov was pitted against Deep Junior and Deep Fritz, running on standard servers that cost only “a few thousand dollars". And still, he could only play them to draws in two matches. In 2006, Vladimir Kramnik, who succeeded Kasparov as world champion in 2000, lost a match to the latest version of Fritz 4-2.

The debate over human intuition versus the brute force of number crunching has ended. “For the rest of human history, as the timeline draws into infinity, machines will be better than humans at chess," Kasparov writes.

So, it is time to free our imagination to seek out for our machines new complexities and new challenges. The next frontier could well be the game of Go, played on a 19x19 chequered board with 361 stones, argues Kasparov. The matrix of the Go board is too big yet to be cracked by the brute force of computing. Still, in 2016, the Google-backed artificial intelligence (AI) project Deep Mind and its Go-playing offshoot AlphaGo defeated the world’s best Go player, Lee Sedol. “And as predicted, the methods used to create AlphaGo were more interesting as an AI project than anything that had produced the top chess machines," Kasparov writes. “AlphaGo is a beginning."