From Indira Gandhi to Deepika Padukone, this store has dressed them all

Deepika Padukone's wedding sari came from luxury label Advaya, which is giving the Kanjeevaram an update with linen and Khadi blends

The owners of The House of Angadi, an upmarket sari label from Bengaluru, have always been media shy. Getting K. Radharaman, the 38-year-old CEO and design head, to pose for a photograph is quite a challenge, and it takes the combined efforts of the photographer and Radharaman’s wife Supriya (who says very firmly that she doesn’t want to be photographed) to get him to relax and pose. Even then, he’s visibly uncomfortable, and rushes away as soon as the shoot is done.

And yet the reticent owner and textile designer has inadvertently found himself in the spotlight over the past 10 days or so—ironically, through a mislabelling by another designer. When Sabyasachi Mukherjee posted photographs from Deepika Padukone and Ranveer Singh’s wedding, with Padukone in an orange silk sari, and captioned it as “head-to-toe in Sabyasachi", he kicked up a social media storm that Radharaman and his family brand got caught up in, because the sari was actually from the private luxury label Advaya from The House of Angadi.

The label is a brainchild of Radharaman, a self-taught designer with an engineering degree from Cornell University. “I learnt through experiments on the loom, and my father was the best teacher I could have had," he says. After mastering the craft, he launched Angadi Silks in 2001 in south Bengaluru, followed by Angadi Galleria in 2014. However, the family has been in the business for centuries. According to family lore, they belong to the community of Padmashali weavers, one of the traditional silk weaving communities of southern India, who migrated from Warangal to the Tanjore river delta in present-day Tamil Nadu. Other families like Devangas and Saligars also migrated to the region, and settled in and around Kanchipuram, which became a bustling textile weaving centre over time, giving its name to the Kanjeevaram sari.

Radharaman’s father, R. Kothandaraman, took control of the family business in 1954 and modernized it, with a fully integrated handloom weaving facility and bringing electricity and telephone services to the weaving clusters. The business also attracted high-profile clients, and Padukone is certainly not the first leading actor to buy a sari from them. One of the framed photos at Angadi Galleria shows Nargis Dutt being attended to by Kothandaraman. “Mrs Indira Gandhi was also one of his customers. When he visited her, he would be waved in without having to go through the security protocol," recalls Radharaman. One of the other highlights—clearly, one the family prizes, because it finds place in the illustrated timeline of the family mounted on the wall of the gallery and etched into its coffee-table books—is former World Bank president and US secretary of defence Robert McNamara’s visit in the 1960s. In 2010, Radharaman launched Advaya to carry out innovations he had been planning. “In most handlooms, there has been no serious design intervention for centuries. The basic fabric has not changed," he says. Even though the Advaya saris continue to be woven in the traditional jacquard weaving technique, Radharaman crafted new blends and motifs, such as the silk-linen blend Kanjeevaram and the Khadi Kanjeevaram, and introduced a series of Ikat-inspired designs. The linen-silk blend is created using silk threads in the warp and linen threads in the weft, with the motifs being weaved in using jacquard “punch cards" that are mounted on the loom. What also sets the Advaya label apart, he says, is the exclusivity of the designs and colours. Each design is crafted into a limited number of saris, and it takes 30-60 days to make a sari.

But can you still call these saris “Kanjeevarams"? “It’s a common misconception that ‘Kanjeevaram’ is a weave. It is not, and we cannot use these terms loosely," he says. “It is a simple, basic weave. The name ‘Kanjeevaram’ is a factor of having a particular design vocabulary common to the Kanchipuram cluster, and this includes motif, technique, colours, construction," he adds.

The price of the Advaya saris ranges from ₹ 25,000 to ₹ 3 lakh. Interestingly, one of the unexpected fallouts of the Padukone wedding photographs and the “controversy" has been people calling up the store to ask for the price of the saris she wore. “How can we tell the public that? It is associated with a private moment, a very special moment. Putting a number on that would be very tacky," says Supriya.

There is deep symbolism attached to the motifs of Kanjeevaram saris. Most of the motifs can be found in many creative forms—in temple architecture, in sculpture, art, literature and dance. A list of some of the most interesting motifs and what they signify It is an amalgamation of various animals, with griffin-like features that can be traced to part-lion, part-horse, and part-elephant. The motif denotes strength and is said to ward off the evil eye. An elaborate brocade pattern that depicts forest scenes with animals like elephants, deers, lions, peacocks and swans. Variants include hunting scenes with a king on an elephant. 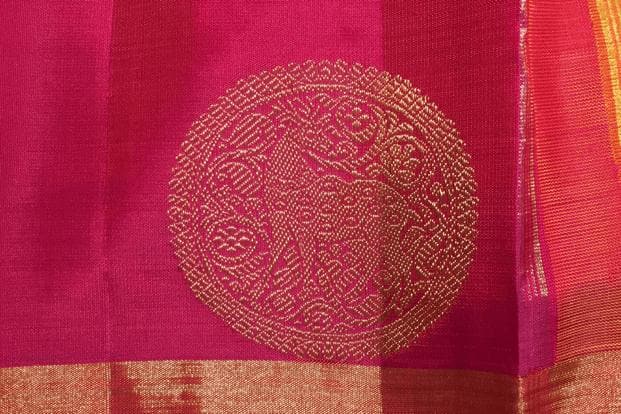 The deer motif probably comes from the animal’s place in mythology, such as the Ramayan. It is often found woven into borders accompanied with flowers and creepers. A mythical bird with two heads, signifying strength and grace, the motif is associated with the Prahlada myth and was revived as a sign on coins during the reign of the Vijayanagara kings.