French Open: 4 first-time women make it to the semi-finals 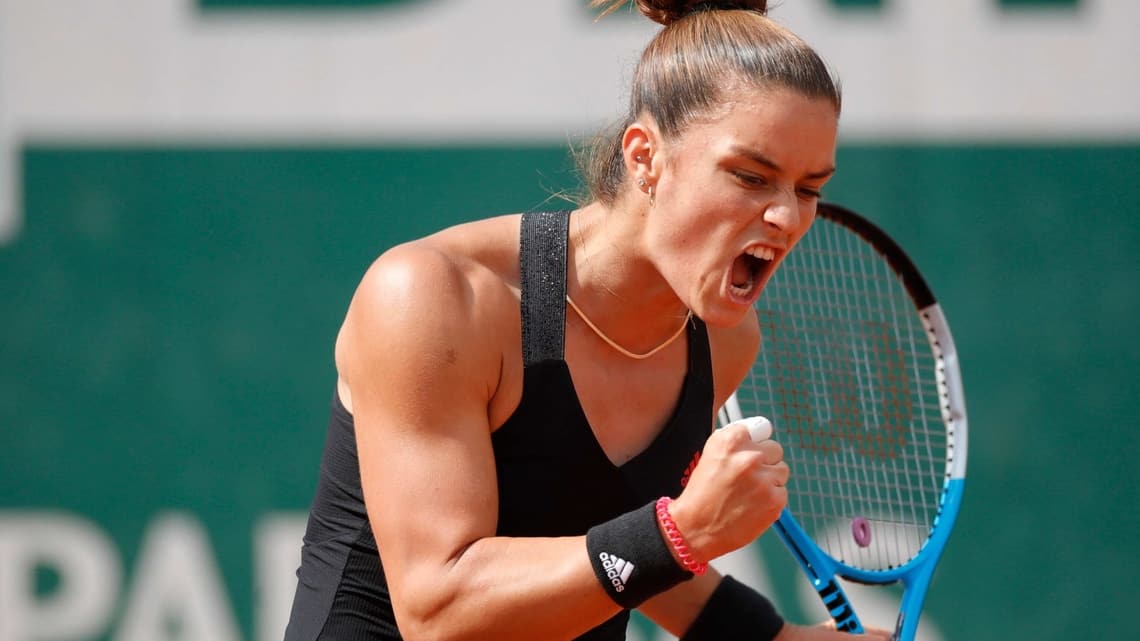 Greece's Maria Sakkari reacts during her fourth round match against Sofia Kenin of the U.S. REUTERS/Sarah Meyssonnier (REUTERS)

Maria Sakkari, Anastasia Pavlyuchenkova, Barbora Krejcikova or Tamara Zidansek will continue the recent trend of new Grand Slam champions at this year's French Open after another tournament littered with surprises.

For just the second time in the Open era, there are four first-time major semi-finalists in the women's singles, after the 1978 Australian Open. Sakkari is the highest-ranked player left in the field at 18 in the world, 67 places above Zidansek, the first woman representing Slovenia to make the last four of a Slam.

Despite the return to its traditional May-June slot, the French Open women's event has been just as unpredictable as the one-off 2020 autumn edition, if not more so.

Pavlyuchenkova, a former junior world number one, needed 52 attempts to reach the semi-finals of a Grand Slam. At 29, she is the oldest player remaining, having claimed the scalp of third seed and Madrid champion Aryna Sabalenka before eliminating two-time Australian Open champion Victoria Azarenka.

The Russian had lost six previous major quarter-finals, a sequence dating back to 2011 when she blew a healthy lead against eventual finalist Francesca Schiavone in Paris. "It's really incredible I'm still playing tennis 10 years later," said Pavlyuchenkova, who took down Elena Rybakina, the conqueror of Serena Williams, in the last round.

For a country of just two million, Slovenia has a knack of producing elite sportsmen and women, a list to which the 23-year-old Zidansek is hoping to her add herself. The world number 85 had fallen at the first hurdle in two prior visits to Roland Garros, entering the tournament with a dismal Grand Slam main draw record of 3-8.

A three-time junior snowboard champion, Zidansek shunned the cold for the relative warmth of the tennis tour and served notice with a first round takedown of 2019 US Open champion Bianca Andreescu.

Sick of tennis after an early exit in Rome, a quick island getaway quickly restored Sakkari's passion for a sport in which Krejcikova has worked hard to shed what she viewed a derisive tag of doubles specialist. For a nation where football and basketball typically rule, Greece will have two players in the semi-finals after Stefanos Tsitsipas made it to the men's last four.

"I think the draw has changed so much so it doesn't really matter who was the highest ranked in this tournament. We're four very good players. I don't think the ranking matters," said Sakkari, who beat 2020 runner-up Sofia Kenin before shocking reigning champion Iga Swiatek.

Sakkari, whose mother Angeliki reached the third round at the French Open in 1985 and 1987, could break into the top 10 if she lifts the Coupe Suzanne Lenglen this weekend.

Krejcikova, a 2018 Roland Garros doubles champion, is two wins from adding the singles title to her collection. Mentored by the late Jana Novotna, the 33rd-ranked Krejcikova had never won a Grand Slam singles match before last year's Australian Open.

She has defeated fifth seed Elina Svitolina and 2018 runner-up Sloane Stephens, overcoming crippling anxiety ahead of her match with the American that led to the Czech locking herself in the physiotherapist's office.

Also Read: The race for the 2021 French Open title just got hotter