In their pursuit of world cup glory, the Chinese clubs are on a spending binge. What are the implications?

Former Manchester United and Juventus striker Carlos Tevez’s current contract (a two-year deal signed in December) at the Chinese Super League club Shanghai Shenhua is worth $41 million (around Rs275 crore) a year. That’s $808,000 a week, $115,000 a day, $4,800 an hour and $80 a minute. It’s the total combined salary of Chelsea star Eden Hazard and Manchester City’s midfield geniuses David Silva and Kevin De Bruyne. Or almost double the pre-tax salary of Cristiano Ronaldo and Lionel Messi, who are on a reported $456,000 per week. Whichever way you see it, it’s a ridiculously high amount.

Tevez’s CV boasts of league titles in England, Italy and Argentina, along with a Champions League medal, but the 33-year-old’s abilities are no match for the names mentioned above. While Ronaldo and Messi have collected nine Ballon d’Ors between them, Tevez has none. But then, talent gradation is subjective; what is clear is that Tevez will be earning this much playing in China in a league which was about as important as a stray asteroid, but has suddenly veered off course to cause disruption in the football galaxy.

Inflating the player market to attract talent is not a new phenomenon. Real Madrid have been doing it for a long time, Manchester City started doing it after getting Gulf money, Chelsea have been doing it since the club was bought by Roman Abramovich. The case in China, however, is not of one club making a super-expensive, one-time deal. It is one of the league doing it collectively. 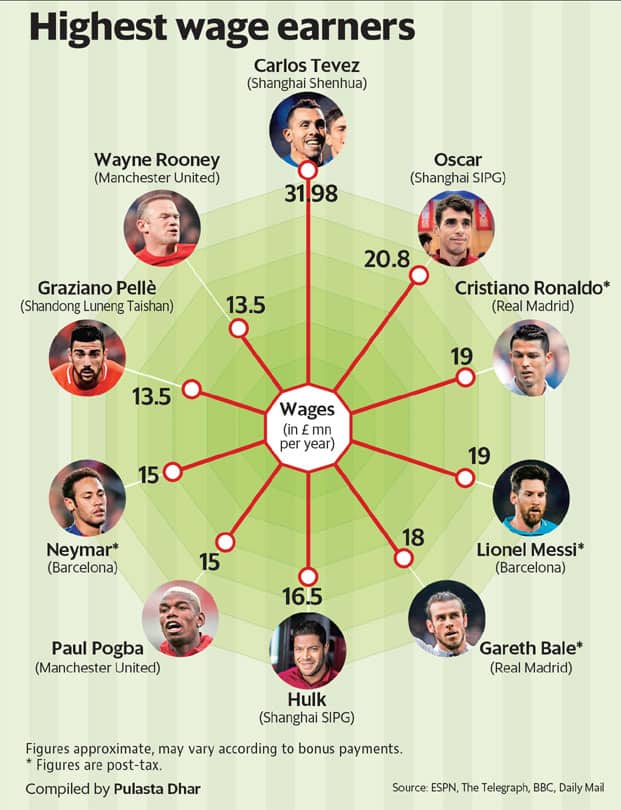 And the disruption has already started. According to Fifa’s transfer matching system (TMS) data, the Chinese clubs outspent their Premier League counterparts in the 2016 winter window. They brought in players such as Alex Teixeira for $48.5 million (from Shakhtar Donetsk to Jiangsu Suning), Ramires for $31.2 million (from Chelsea to Jiangsu Suning), Gervinho for $19 million (from AS Roma to Hebei China Fortune FC) and even the in-demand Jackson Martinez for nearly $44 million (from Atlético Madrid to Guangzhou Evergrande). In just one season, they trebled their overall spending from the previous season, splashing $296 million on international transfers compared with England’s $181 million in the January market. Spending this money on just 22 total transfers, they broke their transfer record thrice in 10 days.

They have gone all out. Apart from Tevez, Oscar moved from Chelsea to Shanghai SIPG for a staggering $75 million. The Brazilian is set to earn $500,000 per week and will be pinging passes forward to fellow countryman Hulk, who moved from Zenit St Petersburg for $59 million. Odion Ighalo, Axel Witsel and even Graziano Pellè have moved to China.

Forget about the money for a second; what is really remarkable is that these players are not washed up. Aged 26-32, they are all stars who were playing in top leagues: Ighalo and Pellè were regularly finding the back of the net for Watford and Southampton, respectively.

Witsel turned down Juventus for Tianjin Quanjian. And his words probably explain why players are flocking to this untested football destination. “On the one hand, there was a great team and a top club such as Juventus, but on the other, there was an offer which I could not refuse for the sake of my family," he told the media. Of course he couldn’t; the 28-year-old, who has played 80 times for Belgium, will pocket around $19 million per year.

And it’s not just the players. Managers André Villas-Boas, Fabio Cannavaro, Luiz Felipe Scolari, Manuel Pellegrini and Felix Magath are all coaching in China. Between them, they have three Bundesliga titles, two German cups, one world cup, one Portuguese League title, one Europa League and one Premier League title.

But where is the money coming from?

The answer lies in the close link between Chinese investors and the state—both parties encouraged by President Xi Jinping’s dream of winning the world cup in the next 15 years. According to a Daily Mail report in December: “President Xi has set out a 10-year plan, running from 2015 to 2025, to double the size of the Chinese sports economy to more than £600 billion, based on state and private investment in football. He wants to produce 100,000 players by ploughing money into grass-roots football and creating 20,000 new ‘football schools’ and 70,000 pitches by 2020."

In 2015, state-backed China Media Capital invested £265 million (around Rs2,200 crore) in Manchester City owner Sheikh Mansour’s football business for a 13% stake. This came shortly after Xi was given a tour of the club’s academy. The same firm paid $1.3 billion for Chinese Super League’s TV broadcast rights for five years.

As a February 2016 Financial Times report from Beijing put it, “The confluence of money, politics and sport has for the time being created a virtuous cycle of rapidly escalating value across the industry." And this allows a Chinese club to offer Ronaldo a $105 million a year contract (which he turned down).

“The Chinese market is a danger for all," Chelsea manager Antonio Conte said. Arsenal manager Arsène Wenger concurred: “I don’t know how deep the desire in China is, but if it’s a very deep political desire then we should be worried."

But the decision makers are now trying to curb this exorbitant spending. Next season onward (March), Chinese clubs will only be able to field three foreign players per game. They must also name two Chinese players aged under 23 in their match-day squads, with at least one in the starting eleven. Earlier, they could select four foreign players of any nationality and one Asian player in a match-day squad.

That doesn’t mean the game will stop growing. Average attendance in the Chinese Super League was around 22,000 last season, a healthy number for a nation whose football scene was marred by a match-fixing scandal in 2009. For a country which had no football pyramid because clubs were banned for political reasons from holding gatherings of more than 10 people, China has come a long way.

They did it with the Olympics, and now they have set their sights on football.

Pulasta Dhar is a football commentator and news editor (sport) at Scoopwhoop.