Fit for the Goddess

Of the proverbial 13 festivals spread over the 12 months of the Bengali calendar, Durga Puja is undoubtedly the most flamboyant. The towering pandals, dazzling light-art, heady rhythm of dhaak (drums), and the retail rush make the season an evergreen spectacle. But the spirit of this carnival is perhaps most sensuously captured by the sheer range of culinary delights associated with it. Bengalis welcome the goddess home, along with her four children, with food fit for the heavens—a lavish spread that straddles the home and the street.

Kolkata’s street food, a great leveller across the social spectrum, becomes more ubiquitous than usual on the five days of the festival. Worries over health and hygiene are set aside, as people flock to roadside stalls for phuchka (gol-gappa in the north), jhal muri, rolls, cutlets and chops (croquettes stuffed with beetroot, fish or mince meat). Doffing its hat to the cosmopolitan diversity of Kolkata’s street food, Monkey Bar has curated a special menu, to be served till 21 October in its Kolkata, Mumbai and Bengaluru branches.

Conceptualized by Kolkata-based home chef Iti Misra, along with Dheeraj Varma, the head chef of Monkey Bar, the menu is thoughtfully put together. Tracing a map across the city, it pays homage to the choicest street food from spots that are part of urban legend. From the ghoogni in Vivekananda Park to the fish roll on Beadon Street, there is an embarrassment of riches that include Chitpur Road Chicken Rezala and Elgin Road Pork Momos. The selection reflects the history of the food consumed, and sold, by settlers to the city, as also by its erstwhile rulers. There are momos of the Tibetan community, dumplings from the Chinese, Mughlai paratha (the versions served at the legendary Anadi cabin in central Kolkata), and cutlets that entered elite clubs, thanks to British colonizers.

“The idea was to present the cosmopolitan culture of Kolkata’s street food and make it fit the menu of a gastro-pub," says Misra on the phone. “We selected those dishes that people could share and the food could sit on the table for a while without losing its flavour." Hence jhal muri didn’t make the cut, as it turns soggy if not eaten quickly. 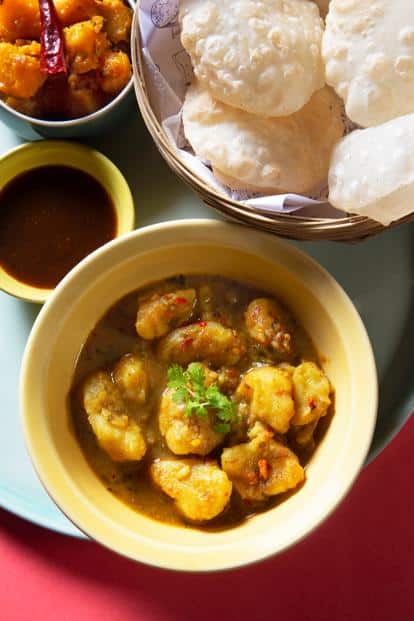 Each recipe, though inspired by tradition and true to the character of the original, is dressed up for a restaurant clientele. The ghoogni, for instance, is embellished with jhuri aloo bhaja (potato juliennes fried into a crisp). The fish roll is served with kasundi-mayonnaise, a concoction made with the fiery mustard sauce from Bengal. The menu avoids sweets, which Bengal excels in. “We thought it would be best not to try invent the wheel," Misra adds.

Although street food is consumed voraciously during Durga Puja, the festival also calls for homely indulgences, in the form of recipes handed down through generations. “Every family’s puja signature lies in the goodies that are made for Bijoya Dashami (the last day of Durga Puja)," says Sreyashi Dastidar, former Kolkata-based journalist who currently lives in Bengaluru. “My favourites from our Bangal (as people who came to West Bengal from Bangladesh are known) kitchen are shoroshpowa—also known as ichar matha or ‘head of a prawn’ in ‘East Bengal’ for the way it looks—and elo-jhelo." Shoroshpowa, Dastidar says, is a slightly soft, sweet with a coconut-jaggery stuffing, coated with solidified sugar-syrup. Elo-jhelo, as its name suggests, is a twisted but pretty crunchy sweet made of maida (refined flour) and ghee (clarified butter), dipped in sugar-syrup.

Culinary experts Pritha Sen from Mumbai and Nayana Afroz from Bangladesh are putting together a special puja menu at Mustard, Mumbai (till 16 October), featuring classic recipes, especially from Bangladesh.

Traditionally, there are three strands of cuisine related to the worship of the devi: the Vaishnav or strictly vegetarian version; the shakta style, where meat and fish are served to the Mother Goddess, though cooked in the “vegetarian" way, without onion and garlic; and the tantric prasad, laden with meat and wine, offered to goddess Chamundi.

The menu at Mustard represents all three. The sattvic vegetarian platter can be complemented with a fish or duck dish from Bangladesh, if you are a meat-eater. Bharta, or mash, an integral part of Bangladeshi food, is also there in its vegetarian and non-vegetarian variants.

Sen is cooking with ingredients that were in vogue before the Portuguese brought their spices into the subcontinent, especially chilli peppers. “I’ll be using chui jhal, which is considered as a horseradish in South Asia," she says on the phone. When the root of this flowering vine are thinly sliced and cooked, it releases a mildly pungent aroma, and lends a kick to a dish. Sen is also using an heirloom rice called radhuni pagalo (rice that drives the cook crazy). That name alone is enough to make anyone make a beeline for a taste. 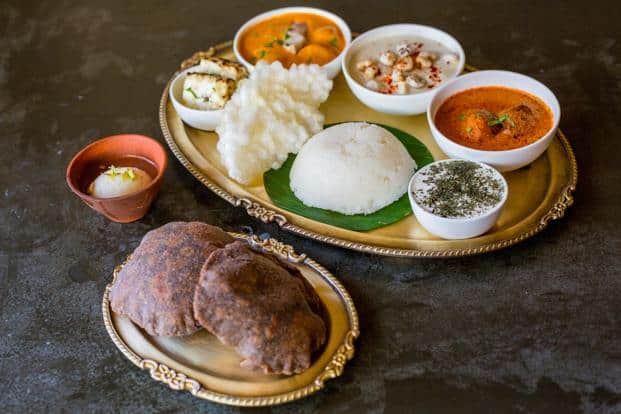 The joys of ‘kuttu’

As a child, Milan Gupta hated arbi (Colocasia root). But come Navratri and he would wolf it down. “My mother had ingenuous ways of adding it to other dishes, like mixing in some with the kuttu ka aata (buckwheat flour) when making puris. I relished it then," he says. For Gupta, the executive chef at Taftoon Bar & Kitchen, Bandra Kurla Complex, Navratri was special because of “the drama associated with the food". “The prayers and puja weren’t as appealing as the food. It just seemed tastier, things were made differently, and every few hours there was always something to eat," he adds.

The festival of Sharad Navratri (on till 18 October) has devotees fasting and offering prayers in anticipation of the Goddess Durga’s visit to their homes. Each day is dedicated to a different avatar of her and has a specific colour. Devotees celebrate by eating food corresponding to the colour: raw banana (green), motichoor laddoo (orange) or kuttu roti (brown). “During Navratri, people usually eat sattvic food. It is light and healthy and doesn’t go to any extreme—too sweet, spicy, or salty. The idea is the body doesn’t have to work hard to digest the food," says Reetu Uday Kugaji, chef and food consultant. “The food purifies the body and balances the mind and enables the person fasting to be focused in his/her devotion".

This fasting food is called faraali or falhari. It includes fruits and vegetables like potatoes, sweet potato, pumpkin, arbi, yam, raw banana, raw papaya, bottle gourd and carrots. There’s no meat, cereals, grains, onions, garlic or salt, things that are considered “heavy". Even the salt is different, sendha (pink Himalayan rock salt) replacing the regular one. Faraali food is not just limited to people’s homes. Across the country, restaurants are offering Navratri menus or sattvic thalis for those seeking variety in their food. Much of the versatility of vrat food has to do with replacement ingredients, particularly for grains and cereals. There’s makhana (popped lotus seed), amaranth (rajgira), kuttu, sattu (gramflour), singhara (water chestnut) and sabudana (sago), among others.

“As grains are not consumed during fasts, things like kuttu and sattu come to the rescue. They are a great source of nutrition and help in maintaining healthy metabolism. Besides, they can be used to make a variety of dishes," says Swaminandan, executive chef at Edesia in Okhla’s Crowne Plaza. Their new menu features singhare or kuttu atta puris, sabudana kheer and samak ke chawal.

Samak (jungle rice) is used in place of rice in kheer, khichdi or pulao. It finds its way into one of the star dishes of Soam’s Navratri menu. The popular vegetarian restaurant in Mumbai serves a Farali Panki—a take on the Gujarati snack.

Meanwhile, Taftoon’s Navratri menu has Bhunja Shakarkand Chaat (roasted sweet potato) and Falhari Pakoras (fritters made with lotus root, paneer and potato). “There’s a misconception that fasting food has to be boring. It doesn’t have to be. There’s a lot of ingredients to work with and different styles of cooking," says Gupta.