Euro 2020: Seven great footballers to watch out for 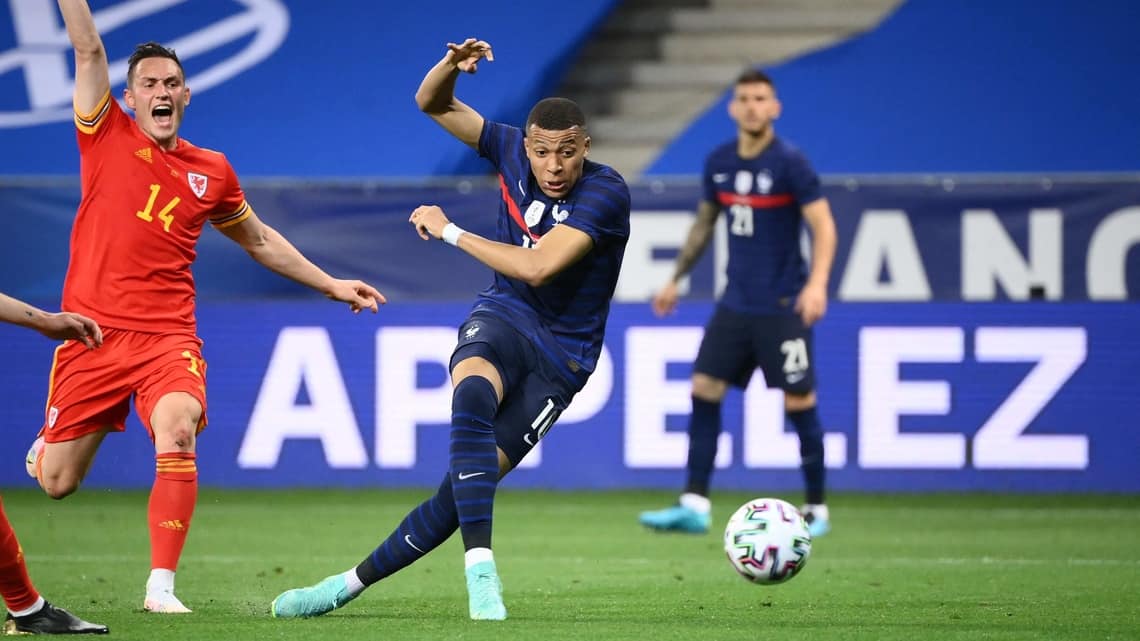 France's forward Kylian Mbappe kicks the ball during the friendly football match between France and Wales at the Allianz Riviera Stadium in Nice, southern France on June 2, 2021 as part of the team's preparation for the upcoming 2020-2021 Euro football tournament. (AFP)

The month-long UEFA Euro 2020 kicks off on 11 June. It will be the biggest international footballing extravaganza before next year’s World Cup in Qatar. Down the years, the Euros have always thrown plenty of surprises -- unexpected winners, thrilling performances and talented players who understand the importance of the competition to make a name for themselves and cement a spot in the national teams. There’s a large bunch of exciting players playing in this year’s tournament as well. Here’s a preview of some of the players to watch out for from every group.

In a team full of experience and steel, Juventus winger Federico Chiesa offers some much-needed youthful exuberance. Still only 23, Chiesa has become an integral part of the Juventus squad, where he plays currently on loan from Fiorentina. A clean striker of the ball with either foot, Chiesa’s speed and skill lets him operate not only on the wings but in the forward positions too. He finished the season with 14 goals for Juventus in all competitions, including the winner in the Coppa Italia final. Italy will be hoping that he can replicate his club form at the Euros.

The Belgians have nothing short of a dream midfield and attacking line-up. Sample this. Kevin De Bruyne, Axel Witsel, Yannick Carrasco, Leander Dendoncker are part of a formidable midfield. If that’s not enough, you have the likes of Eden Hazard and Romelu Lukaku up front. Expect plenty of attacking football and goals from this team. But it’s Leicester City’s Youri Tielemans that could yet have a standout tournament this year. The 24-year-old capped off a brilliant season with Leicester by winning the FA Cup, putting in a man-of-the-match performance in the final. While Leicester narrowly missed out on Champions League qualification for next season, Tielemans can yet help Belgium win the Euros.

Belgium's midfielder Youri Tielemans controls the ball during the international friendly football match between Belgium and Croatia at the King Baudouin Stadium in Brussels on June 6, 2021, ahead of the EURO 2020/2021 tournament. (AFP)

With no Virgil van Djik in the team, the stage is set for Juventus centre-back Matthijs de Ligt to remind his harshest critics that he’s still one of the world’s best young defenders. De Ligt moved to Turin from Ajax in 2019. He’s yet to prove his mettle in the Serie A, but at just 21, he has the time to establish himself as a proven player not only at Juventus but with the Dutch national team as well. That is, if he can keep his injury woes aside and stay fit throughout the competition. Apart from de Ligt, this Dutch team has some really reliable names in their ranks. In midfield, Liverpool’s Georginio Wijnaldum and Barcelona’s Frenkie de Jong will be ready to pull the strings. Lyon’s Memphis Depay, 27, is in the form of his life as well. He finished last season as the top goalscorer for Lyon across all competitions.

A dynamic presence in the midfield, Jude Bellingham’s ability belies his tender age. It’s amazing when you think that the midfielder is still 17. His recent performances for Borussia Dortmund in the Champions League have definitely convinced England manager Gareth Southgate that the Bellingham is ready for the big stage. The only stumbling block is Southgate’s exhaustive options in midfield: Jack Grealish, Declan Rice, Mason Mount or Kalvin Philips -- who makes the cut? Even then, with Manchester United forward Mason Greenwood, 19, ruled out of the Euros due to injury and Phil Foden now amongst some of the more senior names on the team sheet, Bellingham has the chance to cement his status as one of the best young players in the world.

Villarreal forward Gerard Moreno comes to the tournament in sparkling form. The 29-year-old finished the season with 30 goals in all competitions, including a precious strike in the Europa League final, where Villarreal overcame Manchester United after a thrilling penalty shootout. Moreno’s versatility -- he can play as a striker or as a number 10-- and experience make him an invaluable asset for Spain.

Poland’s Robert Lewandowski’s seven years at Bayern Munich have been phenomenal. He just can’t stop scoring. The 32-year-old broke a long-standing record in the Bundesliga this season when he bagged his 41st goal. Gerd Müller’s Bundesliga record for most goals in a single season, which stood for 49 years, was finally broken.

It’s difficult to predict Poland’s chances in this tournament but do remember that they made it to the quarter finals in Euro 2016. Could the Poles go beyond the quarters this time out? Their most capped player and all-time top scorer, Lewandowski, could have a big say in that.

The defending world champions France go into the tournament as favourites. Les Bleus have such an impressive squad that it’s hard to pick just one name. N’Golo Kanté, fresh from his Champions League triumph with Chelsea, will be at the heart of the French midfield. Beside him will be Paul Pogba, who tends to come alive on the international stage. But the main star will be PSG forward Kylian Mbappé, who, with his speed and precision, can unlock any defence. Having come off a stellar season where he scored 42 goals in all competitions, the 22-year-old is all set to take the Euros by storm. If he clicks, there’s no stopping France.