The weather literally changed hour to hour. The day often began sunny and warm, but by 9am, dramatic thunder and lightning would precede an intense downpour, and the temperature would drop. By afternoon, rolling fog would darken the day and make driving a tense affair. Sometimes, it would suddenly become sunny again. Then, more rain, thunderstorms and chilly nights.

Meghalaya’s weather was more unpredictable than any we had experienced. What was predictable was the warmth of the people—like a million beacons of light through the state’s rolling fog—and the excellence of the food. That warmth first became evident in Shillong at the home of Bateilang Rumnong, or “Bats", the wife’s college buddy, and his wife Donna, whom we were meeting for the first time.

As the wind howled outside, Donna served up a spread of Khasi food, the centrepiece of which was her minimalist pork (you can try out my interpretation below). For the vegetarian spouse, there were fried brinjal slices in a toothsome yogurt sauce.

The warmth of Meghalaya was evident even in the smiles from strangers. In remote villages and marketplaces, where there were no tourists and we were evidently outsiders, except for a few sidelong glances at the wife’s curly hair, no one stopped to stare or follow us.

The pork is terrific, I told Donna, but the brinjal—which I had not planned on eating—was awesome. An English schoolteacher with an ultra-calm demeanour—possibly the result of handling all those teens and three children of her own—Donna smiled. “Actually, that is an Odiya dish."

We were just back from an enthralling and somewhat gruelling tour of the East Khasi and West Jaintia Hills. Bats drove without break on mountain roads, through driving rain in the daytime or at night through zero-visibility fog, the lights of oncoming vehicles visible only at the last minute. He generously put his life on hold and whisked us away to see high waterfalls, deep valleys, dark mountain caves, sacred forests and grand landscapes. We visited “Asia’s cleanest village", Mawlynnong—it really was clean and pretty—strolled across a scary suspension bridge and a bridge painstakingly fashioned over nearly half a century with the living roots of a rubber tree. We walked to dramatic cliff edges—most of which appeared to be sites of morbid folk tales involving murder and suicide—and listened to the loud symphonies of the forest at night. 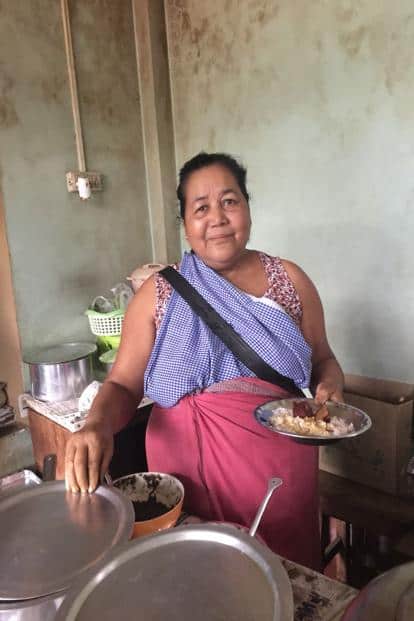 Most of all, we ate our way through the Khasi hills, stopping at little roadside ja and sha—tea and rice—stalls. At one such stop in Umsning, the jolly owner of the Meiduh Thangkhiew Dukan Ja & Sha doled out a memorable meal of local red rice, pork, beef meatballs, smoked beef and a variety of vegetables, all cooked on a wood fire, for about Rs120. At Mylliem, towards the end of our road trip with Bats, we bought blood sausages immersed in a herb-flavoured broth from roadside vendors, flame-red tungtap—a chutney of dried fish, red chilli, garlic and raw onion—and smoked beef from a dark but lively and nameless tea shop.

These sausages and smoked beef were to supplement Donna’s pork and brinjal. Don’t cook much, she was told by her husband, we will pick up stuff. Of course, she did not listen. By the time we reached their warm home on a hill in the heart of cool but traffic-jammed Shillong, the feast was ready. Lightly stir-fried carrots and bean, fried potato, jamyrdoh—local greens with onions and tomato—and Khasi dal for the wife. She took the smoked beef and made it two ways: fried with green chillies, onion, ginger and lime juice; and dry roasted.

As the feast was laid out, the extended family joined in: Donna and Bats live in a family compound. Apart from their two boys and a teenage daughter—much to my delight, she wants to be a pilot—there were assorted cousins and Donna’s mother, who left before 9pm because she had to catch the latest edition of a Hindi serial called Naamkaran. No childcare or nannies here—the children were in and out of each other’s houses, and no one appeared certain of their specific locations. Bats’ parents and siblings were a short walk away, as was his church, where Donna and he had married. Assisted by her mother, Iba, their genial daughter, diligently scrubbed and cleaned up, refusing offers of help, leaving us to nurse our drinks and sink into the warmth.

2 tbsp black sesame seeds, roasted and pounded (ensure the seeds do not get burnt)

Heat mustard oil. Brown garlic and onions. Add turmeric and sauté. Add a little water if it dries up. Add pork with pounded sesame and ginger. Sauté till water evaporates. Add hot water and salt (the water is added so that the fat does not coagulate). Simmer for about an hour or until the pork is soft.

This is a column on easy, inventive cooking from a male perspective. Samar Halarnkar is the author of The Married Man’s Guide To Creative Cooking—And Other Dubious Adventures.