Don’t throw away the peels, shoots and leaves

Colocasia stem, beetroot leaves, watermelon rind, Malabar spinach seeds, pumpkin peel, cauliflower stem—have you wondered what all of these might have in common? It’s the dustbin. Every single one of these invariably lands in the dustbin before the cooking process begins. But if we take a close look at traditional Indian cooking, each one of these can be made into perfectly edible and, in fact, delicious dishes.

According to food waste reports published in 2011 by the Food and Agriculture Organization (FAO) of the United Nations, one-third of all food produced for human consumption is lost or wasted globally, amounting to 1.3 billion tonnes per year. This in turn is a waste of resources such as land, water, energy spent in food production and the accompanying environmental impact of all the greenhouse gas emissions released as a part of this process. Home and restaurant kitchens are notorious for wasting food, both in its raw and cooked form, something that we all need to take personal responsibility for.

One particularly simple and straightforward way to reduce food waste is to go back to what is called “root to leaf cooking" that our earlier generations practised as a matter of daily routine. This practice is, in fact, starting to make a comeback and is considered one of the hot restaurant trends for 2018. Root to leaf cooking puts to use every part of the plant which has edible potential. This is a more sustainable way to cook and eat and plays a significant part in reducing food waste considerably. The secondary edible parts of a plant, such as stems, leaves and seeds, etc., are often full of nutrition, including fibre. This also allows us to cook two meals instead of one (for example, radish leaves in a stir-fry and the radish in a salad or sambhar), thus making simple economic sense too.

Cooking in a traditional Indian kitchen has always historically been a consciously frugal affair, making the most of every ingredient, be it the stems, leaves or seeds. In fact, unlike the West, meat eaters also find ways to consume as much of the animal as possible, but as a non-meat eater, I am going to focus on plants. If a particular plant part was not edible, it could still be used in several productive ways. Stems could be dried and used as fuel, leaves could be used to make parcels or serveware, or as compost to enrich soil. Most houses in the past had a small backyard with a vegetable patch growing regularly consumed plants such as chillies, greens, tomatoes, and fruit trees like banana and mango, and vines such as pumpkin. The access to fresh produce was both a convenience and a money saver. On a recent trip to Sikkim, it was heartening to see that these traditional kitchen gardens thrive even today. Every home has a neatly fenced yard with a variety of seasonal produce being grown, sheltered by a tall row of corn. Almost every meal we had there was accompanied by a portion of seasonal green leafy vegetables freshly plucked from the yard.

The book Nutritive Value Of Indian Foods published by the National Institute of Nutrition lists a mind-boggling variety of greens and unusual ingredients in its nutrition tables, indicating that these are indeed used by different communities in India in their day-to-day cooking. This includes sweet potato leaves, pumpkin leaves, cowpea leaves and colocasia stem.

We live in times when most of us living in urban areas rarely have access to a farm or a backyard garden. We only have access to hypermarkets. If that was not enough, groceries can also be ordered via an app to be delivered within 60 minutes. The complex scale and supply chain of grocery retail means that it makes little sense for them to stock secondary edible parts of plants, particularly leaves and stems that tend to visibly look stale very quickly in harsh lighting. But even now, while most of these are only accessible to those with kitchen gardens or farms, open markets or mandis are a good place to find vegetables with more than just the primary edible part.

Pumpkin peel is my personal favourite root-to-leaf cooking ingredient. The chopped peel is sautéed on high heat until tender. It is combined with coconut, fried red chillies and urad dal and ground to a coarse paste along with some soaked tamarind. This thogayal is traditionally served with rice. Peels of all squash varieties such as ridge gourd, bottle gourd, chayote squash can be used in the same manner. Pumpkin peels are also used in the preparation of sun-dried vadyo—pieces of the peel are dipped in fermented urad dal batter with spices, sun-dried and stored. These are then deep fried and served with dal and rice.

Drumstick leaves, infamous for housing hairy caterpillars that cause terrible itchiness, is a common ingredient in South India as well as Odisha, and tend to be fairly unknown to city dwellers. This common man’s superfood is rich in iron, calcium, protein, fibre and vitamins. Commonly used to make poriyal (dry curry) or added to dosa batter for added nutrition, colour and flavour, these greens are totally worth seeking out for their rich nutrition profile. 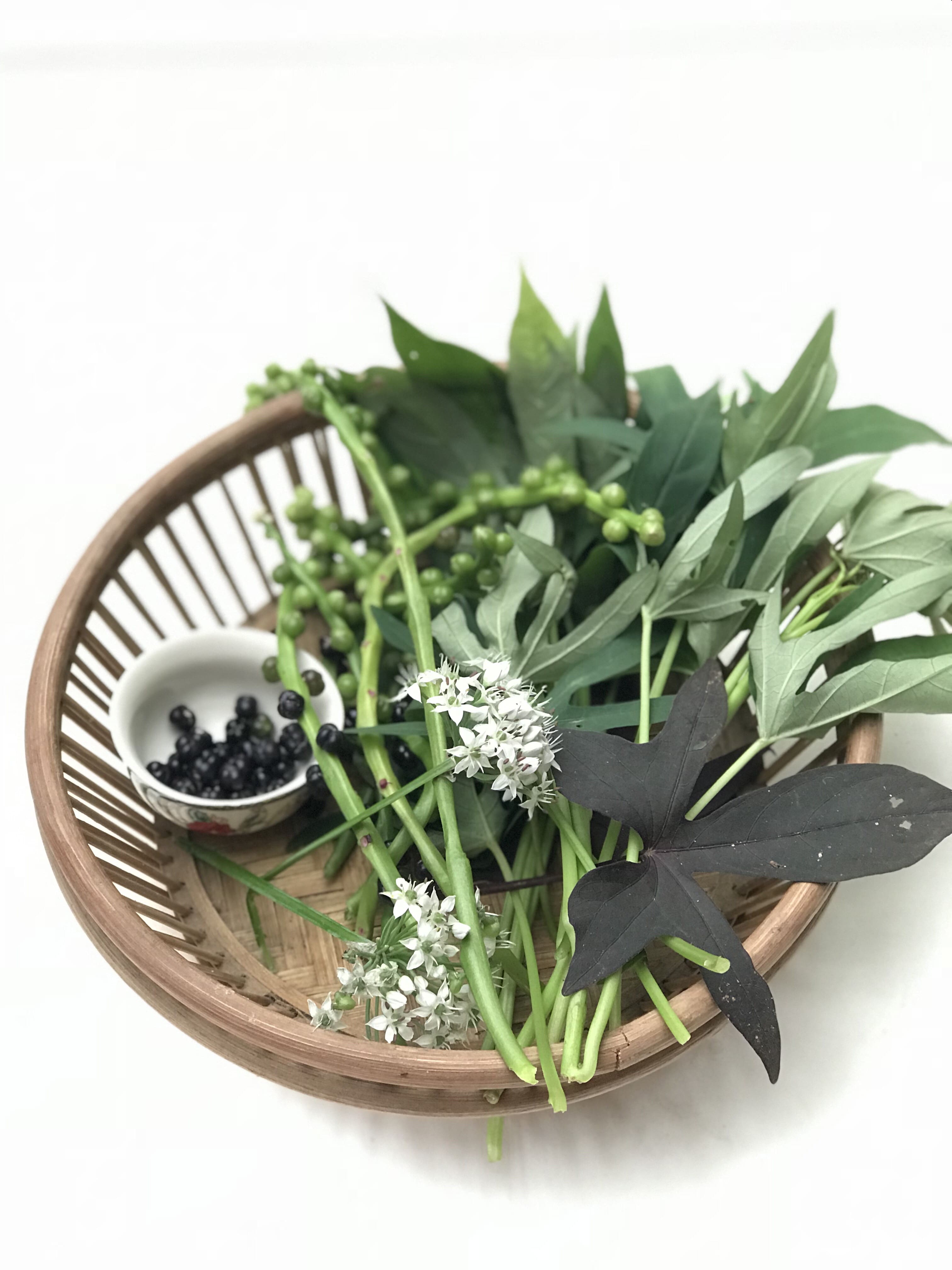 Sprouting sweet potatoes readily break out into stems and leaves when kept in a bowl of water. This is a very doable kitchen garden project even from a window sill. I have been growing sweet potatoes in my kitchen garden for over two years now. Only recently did I become aware of the edible potential of their leaves. The leaves are especially rich in protein, and make a delicious stir-fry by themselves or in combination with diced sweet potato.

Chilled cubes of watermelon are the perfect respite from summer, leaving behind a wastebin full of rind. Both my grandmother and mother have always used the rind in the day’s cooking. The outer dark green peel is discarded and the white part of the rind is diced and cooked in a little salted water until tender. This is mixed with cooked tur dal and a freshly prepared spice paste of coconut, cumin and green chillies to make koottu that is had with rice. The rind is also grated or ground and used in a batter to make Konkani style dosas—kalingana polo.

Colocasia stems are regularly used in Konkani as well as Udupi cuisine. Konkanis make a variety of curries using the stems, both with and without coconut. In Udupi cooking, the stems are a delicacy in the monsoon when they are most tender. They are cooked into a lentil-based curry or a kayirasa, a kind of sweet and sour rasam.

Nature packs nutrition in many places. It’s not just the mesocarp (the fleshy part of the fruit or vegetable) that we eat on a regular basis. The stems and leaves of many plants are fantastic sources of fibre, minerals and vitamins and it’s a pity that we don’t think twice before discarding them. In our relentless march towards technological modernity, root to leaf cooking is one Indian tradition that is worth preserving, if not just for our sake, at least for the planet’s sake.