Mysuru has a deep connection with food, going much beyond the punchy 'dosa' and velvety sweet named after the city

While discussing the many joys of the Mysore benne dosa with a friend a few months ago, she chuckled and said I wouldn’t relish it quite as much if I watched it being made, with too-generous lashings of butter. I smiled and shrugged and said, perhaps. Where better to test this theory than in breezy Mysuru? This summer, on my annual visit to the city where my parents have lived for the last 16 years, I got cracking. Over the years my mother has acquainted me with all kinds of local fare. We’ve done the trendiest joints (like the city’s first microbrewery, The Barge, or the first hip café, The Old House), touristy favourites (the thalis at Dasaprakash and Lalitha Mahal Palace Hotel) and legendary street carts selling smash-hit snacks such as gobi manchuri, churmuri, bhajji, vada, etc. But this time, the agenda was to seek out culinary gems that were deeply embedded in Mysuru’s history and culture. I signed up with Gully Tours for their Royal Mysore Walks, which included a local food tour.

I met Sachin, a student who works part-time as a guide for Gully Tours, on an overcast Sunday evening at the vintage clock tower on the fringes of the busy Devaraja Market. Sachin said the stops on the walk reflected food’s connection to the fabric of the city. This included, to my surprise, samosa chaat at the hole-in-the-wall Madhushahi Samosa Centre run by a Bihari family in a little lane behind the clock tower. It says something about Mysurians’ deep love for chaats that did not even originate here. We began at the tiny Guru Sweet Mart, a shop in a corner by the Sayyaji Rao main road, its size and appearance indicating nothing about the legend that surrounds it. This is where you want to be if you’d like to sample the original Mysore pak, as it was made for the first time a little less than a century ago. A takeaway window revealed a moustached man in his 50s—Shivananda, a descendant of the royal chef Kakasura Madappa who invented the ghee-laden sweet during the reign of king Krishna Raja Wadiyar IV. The Mysore pak here tastes denser and more complex than the versions I have had before. “The king was so struck by the unique taste, he named it after the city. Pak refers to the semi-liquid nature of the sweet as it cooks," Shivananda said. They make it with gram flour, cardamom, turmeric and ghee, cooking it on firewood.

Where there’s a whiff of pak, there also must be churmuri, Mysuru’s answer to crunchy bhelpuri. We munched on perfectly spiced cones of the snack at Chatpatta by Sri Ganesha Chats, a few lanes away from the clock tower. As the sky began to darken, we headed to the best bite of the evening at the three-decade-old Dosa Point, a little joint on the upmarket Devaraja Urs Road. I elbowed my way into the open kitchen to watch the chef pour thick batter on the hissing rectangular tawa, sprinkle oil with a ladle, slather dollops of butter and smear punchy red chilli garlic paste to give the dosa its distinctive kick. A mound of mashed potato is put in, the dosa is folded into a neat triangle and it is good to go. I felt no guilt devouring the buttery preparation with a glass of steaming filter coffee. My friend had clearly been quite wrong.

Was this the city’s best dosa? Depends on who you speak to. A few days later, I met the founder of Gully Tours, Vinay Parameswarappa, at the quaint, vintage- style The Malgudi coffee shop at the iconic heritage property, Green Hotel, which does some excellent teacakes, breads and quiche. “Mysore is a city with a strong recall value and brand," Parameswarappa said. According to him, Mylari, Ramya Mahendra Restaurant and Dosa Point do the tastiest dosas in town. 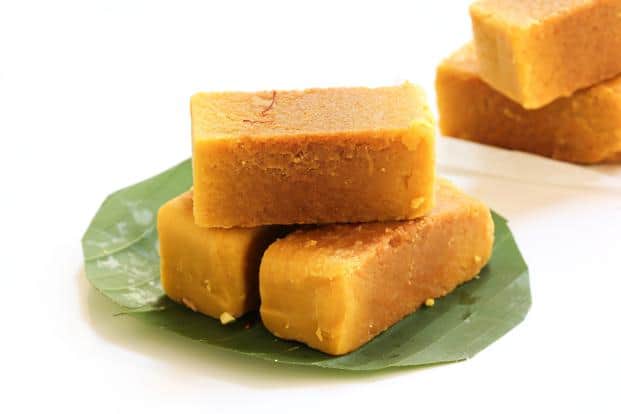 One evening, I landed at the doorstep of what I was assured is the “original" 70-year-old Hotel Mylari on Nazarbad Main Road. There are others by the same name in the area that claim to be as authentic. Mylari’s outdated interiors—plain navy blue benches with marble tabletops, framed pictures of various gods—and a two-item menu offering dosa and idli give away its USP: no frills, no fuss. Ujwal M.R. is the fourth generation descendent who mans the diner from the cash counter. What sets Mylari’s medium-sized dosa apart is not just its fluffy, soft, perfect roundness, but the filling—slightly tangy onion masala instead of potato mash. Mysore dosa aside, it’s rare for me to leave Mysuru without having biryani. One of the best-known biryani haunts is the Andhra-style Hotel RRR, which has lost its zing over the years. This time, I decided to investigate what the fuss around Hotel Hanumanthu (in Mandi Mohalla) was all about. Hanumanthu is legendary for slow-cooking its biryani on firewood. Here, hungry folks line up by 7am for a plate of mutton pulav, which the staff begins to prepare by 4am. When I showed up at 7.30pm one drizzly evening, the server told me apologetically that barely half a plate of mutton pulav remained. The mutton in the pulav came apart at first touch and the short grain rice was spiked with green chillies and garam masala. A coconut milk and onion raita served on the side helped soothe the heat. As I tucked in, photos of celebrity actors and politicians from the state posing with their own plate of the famous Hanumanthu pulav stared back at me from the restaurant’s walls. A meal as earthy as this deserved to end with a dash of sweetness, which came that day in the form of velvety rich badam halwa from Indra Bhavan. The halwa is made of almond paste, ghee and milk, Indra Bhavan’s fourth generation proprietor, Kritarth Chandra, explained.

Back home in Gurugram a few weeks later—where it is hard to keep pace with the astonishingly wide variety of high-end dining experiences—my thoughts drifted back frequently to the simple joys of poking around the lanes of Mysuru, its Malgudi-ness offering a very specific small-town charm, unassuming and unfussy, unlikely to be found anywhere else.