In 1963, when Dalit writer Baburao Bagul published his first book, a collection of short stories in Marathi titled Jevha Me Jaat Chorli Hoti (When I Hid My Caste), it sent shock waves among readers and connoisseurs. The verbal boulders of rage, the raw imagery, and the sheer pathos and grotesqueness of the protagonists pulverized Marathi readership. At the time, the latter largely feasted on the genteel middle-class fare of romantic poetry, dollops of naïve idealism, and an uncritical optimism about a secular, republican, and egalitarian Maharashtrian society.

Bagul’s dark stories spoke of people who were real but rarely written about. He found his characters in the dark by-lanes and red-light areas of Bombay (now Mumbai), which may have been superficially caste-neutral but were certainly colour-conscious. The plots involved the maharwadas (ghettos of Mahars, a Dalit caste) in rural Maharashtra, Bhangi (another Dalit caste with the caste-mandated occupation of sanitation) homes in Mumbai, feudal settings exploitative of women, and factories where workers had to hide their caste.

Born into a poor Dalit family in Nashik, Bagul was sent to live with his aunt in Mumbai’s Matunga’s labour camp at age 10. He saw and felt the world around this proletariat ghetto from a tender age. And he wrote about it in a new idiom that gave confidence and voice to several other Dalit writers. Later he became one of the pioneers of the radical Dalit Panther movement, along with its founders Namdeo Dhasal, an activist-poet as tempestuous as Bagul, and Arun Kamble. In the five decades since it came out, Jevha Me Jaat Chorli Hoti has been through 13 editions. Five years after Bagul’s death in 2013, Mumbai-based author and translator Jerry Pinto infuses new life into the translation, When I Hid My Caste.

Beginning with the translation of Daya Pawar’s Baluta (2015), the first autobiography of a Dalit man in Marathi, which incidentally marks its 40th anniversary this year, Pinto has brought to English readers some of the watershed works of Marathi literature: Malika Amar Shaikh’s memoirs Mala Udhvasta Vhayachay (I Want to Destroy Myself), Gujarathi-Rajasthani-Marathi theatre personality and singer Vandana Mishra’s autobiography Mee Mithaachi Baahuli (I, The Salt Doll), and the novels, Cobalt Blue and Khidkya Ardhya Ughadya (Half-Open Windows), by film-makers Sachin Kundalkar and Ganesh Matkari, respectively. Pinto builds on his formidable reputation as a translator by adding to his repertoire the translations of Jevha Me Jaat Chorli Hoti and Dalit activist Eknath Awad’s autobiography Jag Badal Ghaluni Ghaav (Strike A Blow To Change The World). 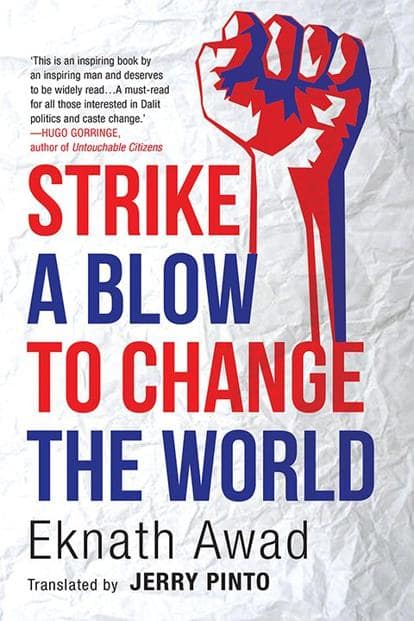 Like Bagul, Awad too was born into a Dalit (Mang caste) family in Marathwada in 1956. In the 1970s, he was an active member of the Dalit Panthers movement but the activist in Awad led him to work with a few NGOs, before he finally found his true calling in the Rural Development Centre, which he set up in 1985, and the Maanavi Hakka Abhiyaan (an organization for human rights.), formed in 1990. Awad, who died in 2015, never confined his activism to his own caste.

Awad’s father Dagdu was a Potraj, condemned to follow the duties assigned to his caste. A Potraj is a religious mendicant devoted to a goddess such as Lakshmi or Mari-Aai and ordained to beg for food. The rest of his family had to do the unpaid Maangki jobs, like cleaning the cattle of upper-caste Marathas, clearing cow-dung from the house of the Patils, and so on.

“The caste system was as strong as the land was fertile. The Mangs’ routine was set as if in stone. The law had made the practice of untouchability illegal, but did the law have any say in the village? In the eyes of Majalgaon, we were still untouchables, we were the rejects of the system and we were still required to do such tasks as had been our lot and to do them without expecting any recompense at all," says Awad early on in Pinto’s translation.

When Awad was 5, Dagdu thought of initiating him into the job of a Potraj. But Eknath’s mother and sister protested, and he was sent to school. He went on to earn a bachelor’s in law, and a master’s in social work.

“Translating Awad and Bagul were completely different processes," says Pinto in an email. “Bagul’s language is peculiarly beautiful and baroque. The evening is a woman adorned by the sun’s love. Darkness is a god descended on a chariot, swallowing up the hills. The sun is a crowbar, the night is a shell, the crowbar breaks the shell open and light pours through....But the events happening are terrible: a boy rejects his mother’s food, another rejects his mother’s love, a bull is ritually slaughtered but not before he takes a man with him....(Awad’s) on the other hand is a narrative with huge energy. The story simply surges forward, acquiring velocity as the boy becomes a man, the man becomes an activist, the activist becomes a leader."

In Bagul’s title story When I Hid My Caste, the Mahar protagonist, employed by the railways, is thrashed by his upper-caste co-workers when they discover his caste. Another Mahar worker, who believes in hitting back, saves him from being lynched. Humiliated and hounded, both workers leave. Then comes the last word, literally and metaphorically, in this intensely powerful work, summed up by the protagonist: “Everything had been stolen from me. Ramcharan had ripped up my certificate and thrown them away. My head was bowed, my walk uncertain. My heart was a city rich with revolution. And Kashinath, with a naked knife in his hand, was roaring, ready to use it on all comers. When we got out of the settlement, Kashinath said to me, ‘Mashthur, let’s go to a police station. ‘No.’ ‘Why did you have to take those idiots’ beating?’ ‘When was I beaten by them? It was Manu who thrashed me. Come, Kashinath....’"