While Jon M. Chu's movie has its charms, it doesn't push the boundaries to reveal the murky realities of Singapore and its varied Asian communities

The burden that director Jon M. Chu’s Crazy Rich Asians has been carrying is not a light one. As one of the few films made in Hollywood with an all-Asian cast, it has become the benchmark against which future films focused on Asian themes will be judged and raises expectations for more Asians to get lead roles. As a film set almost entirely in Singapore, surely an exceptionally diverse society, it carries an additional burden, of getting the multi-ethnic and multilingual city-state right. And with a storyline focused on the very rich, it must also get the ways of the wealthy right.

But Crazy Rich Asians is what critics who write quickie reviews describe as a chick flick and a romcom, and as such, it is unfair to expect any profundity from it. It lavishes attention on the thinnest layer of Singapore’s society, and it fills the shallowness with unabashed, glittering ostentation. It misses opportunities to be subtle and settles for clichés where a bit of boldness would have pushed the boundaries, enabling us to understand Singapore and its Chinese population better.

The plot is simple enough. Based on a novel by Singaporean-American writer Kevin Kwan, who now lives in the US, the film introduces us to Rachel Chu, a smart professor of game theory in New York and the love interest of Singapore’s most suitable boy, Nick Young, heir to a real estate fortune. He hasn’t told her how wealthy he is, sharing her desserts and her Netflix password and preferring the euphemism “we are comfortable" when she begins to realize he is a one-percenter. She remains blissfully unaware of what she is about to walk into as he asks her to join him in Singapore to attend his best friend Colin’s wedding and, inevitably, to meet his parents. We never meet Nick’s father, as like all Chinese fathers he is busy striking deals and making money, but we do meet his elegant mother Eleanor (who was once denied entry into a posh hotel in London even though she had booked the best suite, and hurt by the refusal, she took her revenge by phoning her husband from a phone booth outside the hotel in pouring rain, and he promptly bought the hotel, allowing her to re-enter triumphantly, buying the respect that casual English racism had denied her).

Eleanor however instantly dislikes Rachel, because in spite of her Chinese-ness, she sees in her ambition and passion, traits that an American upbringing encourages. Rachel also meets Amanda, Nick’s ex, who attempts cruel revenge on Rachel at a hen party, though Rachel is determined not to get perturbed. Eleanor has meanwhile engaged a private detective to unearth Rachel’s single mother’s past and, at Colin’s wedding, she undermines Rachel, who seeks support from her college friend Peik Lin (And how refreshing it is to hear a genuine Chinese name!). Rachel turns down Nick’s proposal and moves out of the Raffles Hotel and stays with Peik Lin. Finally, her mother visits Singapore to reveal the truth about her past. But this is a romcom, and as Shakespeare would have it, all’s well that ends well.

While Crazy Rich Asians has its charms and shows Singapore in its sunlit glory, there are several instances where the film could have pushed further, making it worthy of the emotions and complexities of Singapore. But it settles for easier options. In a sensitive scene unintentionally suffused with homo-erotica, Nick and Colin have fled the container ship that is hosting a tasteless stag party for Colin, flying away in a helicopter to a quiet outer island of Singapore. The two men are topless, displaying the well-toned bodies that almost all young Singaporean men have, thanks to the rigorous two years of military service they must undergo, but the tepid dialogue that follows is unable to offer a nuanced possibility in their relationship. Likewise, Rachel is a brilliant academic and surely supremely confident; and yet, unusually in the second half of the film, she turns into a conventional, sacrificing Asian woman. 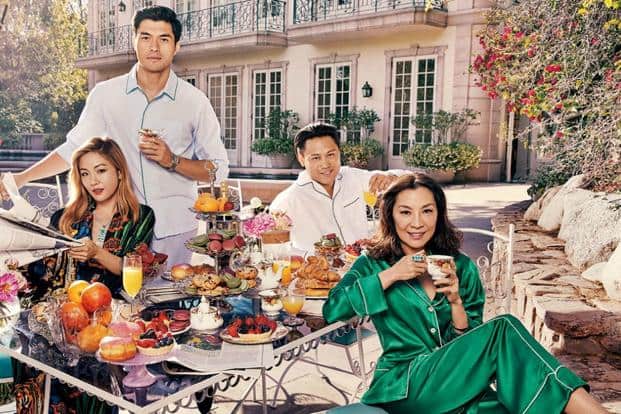 Also, curiously (as a few Singaporean friends pointed out to me), Nick’s grandmother speaks in chaste Mandarin to Rachel, who offers charmingly halting responses (given that she is an ABC—American-born Chinese), but Eleanor speaks in dialect. This makes little sense given their ages. It would have been the grandmom who would have spoken in dialect, a custom that infuriated the late Lee Kuan Yew (Singapore’s first post-independence prime minister who ruled for nearly a quarter century and micromanaged the island with remarkably effective results) who forced the Chinese to speak Mandarin instead. Today, Singaporean broadcast media and public announcements are in Mandarin, but in the shophouses of Chinatown, at hawker stalls and ubiquitous housing development board blocks (unsurprisingly airbrushed from a film focusing on the rich, though nearly eight out of 10 Singaporeans live in such blocks), you’d hear Hokkien and Teochew and, less frequently, Cantonese. The English that the characters speak is straight out of elite institutions founded in the colonial era, like Raffles Girls and the Anglo Chinese School, without the inflections of Singlish, which too irritates the government, but which, with its words borrowed from Chinese dialects, Malay, and occasionally Tamil, make the language as rich and interesting as a bowl of laksa.

And that raises the three flaws of the film from which it never quite recovers. The film is Asian only to the extent of representing a very narrow understanding of what Asia means. To squeeze the largest continent, stretching from Istanbul to Incheon and Bejing to Bandar Seri Begawan, is a superhuman feat, and unless you take the title to mean a joke on the hubris of Asia’s richer nations, which appropriates the broader geography while ignoring the poorer parts, it makes no sense. Many Singaporeans see their island as mini-Asia, and to some extent it is, in that it offers a Disneyland version of Asia.

But just as Singapore isn’t Asia, it isn’t a Chinese city either. A serious criticism the film has received from Singaporean writers—like Kirsten Han, Pooja Nansi, and Sangeeta Thanapal—in the international media makes that point more eloquently. Han writes that the film is “nothing more than a perpetuation of existing Chinese dominance in mainstream media and pop culture" in Singapore, while Nansi argues that the real shame is that the film, “unique for its Asian star power, depends on an unsettling devaluation of actual Singaporeans". Thanapal points out that “the few brown people featured in it are seen in service positions to the glamorous and wealthy Chinese characters".

These critiques are on the spot; the rojak nation (a term many use to describe Singapore’s mixed-up culture) becomes Chinatown in the film, a wealthy one where Sikhs are doormen or guards with bayonets, the odd woman in a sari can be seen fleetingly at a wedding party (and you aren’t sure if she is a waitress or a guest), and there are no Malays, not even at a hawker stall selling satay.

To be sure, there are pockets of Singapore which are ethnically exclusive, but it was to avoid community-based ghettos that Lee, as prime minister, required that government-built housing blocks must reflect the ethnic composition of the city-state, forcing integration. Whether you go to Singapore’s malls, hawker centres, streets, or tube stations, it is hard not to see Singapore’s diversity.

Finally, while the film is about the rich, it is too glaringly so. In 2016, Singapore had one of the worst gini coefficients (which measures income inequality—at 0.465 it was better than only Chile among member states of the OECD nations with which it is often compared), and the elderly are compelled to work into their 70s because of inadequate pension. You don’t see visible poverty in Singapore, but you do see senior citizens working as waiters at hawker stalls and fast food restaurants, and fortunes of families like the Youngs are built on the hard labour of migrant workers from Bangladesh and India, while their family nannies are from countries like the Philippines or Myanmar.

But the film is innocent of such inconvenient diversions. The rich here are crazy but likeable, “different from you and me", as F. Scott Fitzgerald wrote once (“because they have more money", as the critic Mary Colum pointed out, and Ernest Hemingway later famously appropriated). Fitzgerald mocked wealth, as in The Great Gatsby, revealing the illegal source of many fortunes. The rich here are also innocent: Astrid (Nick’s cousin) feels guilty for buying expensive jewellery and hiding it from her husband, who is of humbler origins. They split eventually, but for the conventional reason—he is cheating and she finds out.

Western films have portrayed Singapore in the past, and more accurately. The 1967 film Pretty Polly (with Shashi Kapoor) showed the decadent white community in Singapore with refreshing charm. Peter Bogdanovich’s 1979 film, Saint Jack, based on Paul Theroux’s novel of the same name, was unsparing in its critique of Singapore’s amoral pragmatism (the film remained banned for several years in Singapore).

To understand Singapore, you might do better with Eric Khoo’s 12 Storeys (1997), set in a housing board block; Anthony Chen’s Ilo Ilo (2013), which showed the devastation of a middle-class family’s life during the Asian financial crisis; and Glen Goei’s 2009 film, The Blue Mansion, a sharp political allegory about Singapore’s real first family. Beyond fiction, of late, courageous film-makers like Tan Pin Pin and Jason Soo have cast the spotlight on Singapore’s more recent history and how the city-state deals with dissent. Tan’s To Singapore With Love (2013) tells the story of Operation Cold Store, which targeted Singapore’s early dissidents; while Soo’s 1987: Untracing The Conspiracy (2015) uncovers Operation Spectrum of 1987, the arrest and detention of suspected Marxists who were thought to be conspiring against the government. Both these documentaries raised more questions than what official history acknowledges.

Crazy Rich Asians was never meant to meet such expectations. It isn’t a documentary. Unlike Polly Barlow or Jack Flowers, it does not need an expatriate to introduce Singapore. That should have liberated the film. But it remains caged, even though the cage is golden. To use American journalist Stan Sesser’s phrase for Singapore itself, the film remains a prisoner in a theme park