A lawyer stands in the middle of a courtroom, making a case against Section 377. The law can adversely affect millions of queer people in India, he keeps trying to say, but is repeatedly cut short by the judges. They ask, who are the millions you’re talking about?

This is a scene that repeats itself in Contempt, a play currently running at Delhi’s OddBird Theatre. Written by Danish Sheikh, the play is a part-theatrical, part-documentary work that intertwines real-life courtroom exchanges with personal accounts from members of the LGBT+ community. The main setting is from the 2012 hearings of Suresh Kumar Koushal & Anr vs Naz Foundation, which resulted in overturning an earlier 2009 decision by the Delhi high court that had effectively decriminalized homosexuality.

Actor Amba Suhasini K Jhala in a scene from the play.

Contempt was first developed by Sheikh, a queer activist and lawyer who worked at Bengaluru’s Alternative Law Forum before joining the faculty at Jindal Global Law School, Sonepat, during a playwriting workshop hosted by Delhi’s Tadpole Repertory in 2016. The play was staged in universities across the country as well as Arcola Theatre’s Global Queer Plays Festival in London this March.

The current production began in the latter half of the same month, when actor and director Anirudh Nair of Delhi-based Guild Of The Goat, was approached by OddBird Theatre and Foundation to step in as director of the play. Nair, known to friends and associates as Rudy, was already familiar with Sheikh’s script and the context of the play. “What the play brought to life was the prejudice inherent in the courtroom itself," he says over the phone. “I wanted to make sure that in taking on the project, the vision should not be dictated by me alone."

In its current form, the play draws from the collaboration between four people—Nair, stage designer Oroon Das, lighting designer Deepa Dharmadhikari, and visual artist Santana Issar. Playwright and director Neel Mukherjee is involved with the sound design. Sheikh also acts in the play, along with a cast that includes TV actor Saattvik and transgender activist Abhina Aher.

Contempt is a short play, under an hour, and draws from actual courtroom sessions of the Suresh Kumar Koushal & Anr vs Naz Foundation case, interspersing them with real-life accounts from members of the queer community. The collaborative production design enhances the dramatic script—sheer panels double as props and production screens; and while the courtroom scenes are enacted, the narration of personal stories is done through projection and audio narratives—sometimes, with no actors on stage. 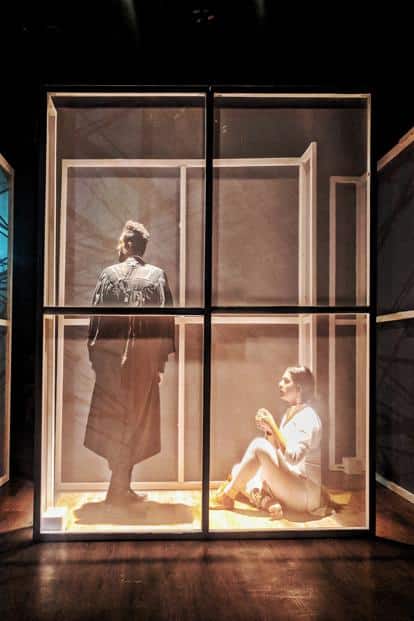 Actors Saatvic and Abhina Aher in a scene from ‘Contempt’.

The multidisciplinary approach was a conscious choice for the team.

“The court was a theatrical space that showed a re-enactment of real-life scenes, but we wanted to document the affidavits as an oral history project, without the clarity of an actor taking up the role," says Nair. The acting is somewhat uneven, especially in the courtroom scenes where the theatrical performance sometimes obscures the legal nuances, but the poignant stories in the affidavits keeps the attention on the narrative.

After its run this month, the production is likely to take a short break and return in the latter half of the year. The timing of the break is significant: the Supreme Court is likely to hear arguments on Section 377 again this summer.

“The play is very relevant right now, but it will need to take into account what happens subsequently," says Nair. A decision in favour of the LGBT+ community will change the entire context of the play—it could become irrelevant—but for the cast and crew, this would be good news.

Contempt will run till 10 June at OddBird Theatre & Foundation in Delhi.