Growing up, Christmas was the only time of the year my mother would have an alcoholic drink, just the one. It was something that was all the rage in the 1970s, called a Snowball. It involved mixing a Dutch egg liqueur called Advocaat—almost like alcoholic custard—with lime and lemonade. Occasionally, she would let me have a sip—it was delicious: sweet, frothy and forbidden.

I still get excited by Christmas drinks and always try to make something unusual—and potent—to welcome festive guests. This year, I’ve been experimenting with fruit liqueurs. If you would like to try this, and you have at least two weeks before your event, you could make a lovely strawberry gin or vodka. Fill a large clean jar with clean, hulled strawberries. Put caster sugar—a third of the way up—in the jar. Add gin or vodka until the fruit is submerged. Close the jar with a tight-fitting lid and store in a cool dark place for a couple of weeks, a month if you can (though you can leave it a lot longer.) The sugar will dissolve gradually and the strawberries will go pale and floppy. Strain off the liqueur into a clean bottle. Serve as it is in tiny glasses or with lots of ice. For a stronger, sweeter liqueur, you can infuse fruits like peaches, pears, cherries with two-thirds brandy and one-third sugar. At the end, you will have the bonus of a delicious brandy-sodden fruit to eat as well. 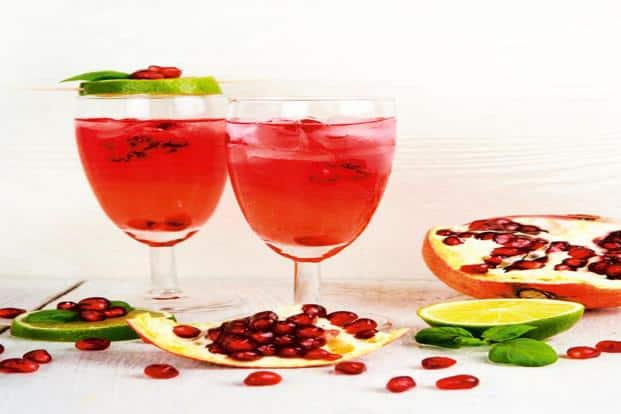 Nigella Lawson’s new book, At My Table, has, of course, has some very glamorous winter party drinks to offer, including a Turmeric and Ginger Vodka which, she says, “will revolutionise your Bloody Marys". Sadly, the drink you’re more likely to encounter at this time of the year is mulled wine which can often be, to put it mildly, a disappointment, little more than a glass of hot acid with a few orange slices floating around. Much nicer is this mulled white wine: Put 750ml dry white wine and 250ml cider (or water) in a pan with four cloves, two cinnamon sticks, the juice of a lemon and one orange, one vanilla pod, split down the middle, and a little sugar. Bring to a boil, then simmer gently for 5 minutes. Serve with lemon slices and cinnamon sticks.

For more macho mulling, how about a krupnik, a warm, spiced Polish vodka? First, a honey syrup is made, to which cinnamon sticks, nutmeg, mace, vanilla pod and the pared zest of a couple of oranges are added. After simmering for 15 minutes, a bottle of vodka is added, then it is left to steep for 48 hours. Strain, bottle and seal, then keep in a cool, dark place for a week. Strain off any sediment and put in a clean bottle. Heat the krupnik before serving. It will keep for a year. For a non-alcoholic version, put a range of spices: two cloves, two star anise, a cinnamon roll and a few crushed green cardamom pods in a pan with 750ml apple juice and 250ml water and a little sugar. Bring to a boil, then simmer gently for a few minutes before serving with long strips of orange peel and a few of the spices.

If you like bubbles for your celebration tipples, it would be nice to add a little something to your fizz. Make a Christmassy Kir Royale with a cordial made from the juice of six pomegranates, 200g sugar and the juice of a lemon. Bring the mixture to the boil, then let it simmer for about 10 minutes. Cool completely before putting it in the bottom of a champagne glass and topping with champagne or Prosecco. Add a few pomegranate seeds and serve. For a non-alcoholic version, add soda or tonic water to the cordial.

For those of us who believe that chai is the best drink any day of the year, how about a Chai-spiced White Russian? Put 25ml of coffee liqueur in a glass and fill with ice. Mix 75ml of cold chai with 50ml vodka, then pour it into the glass and serve. If you’re the kind who thinks there’s no party without Old Monk, try a festive twist with Spiced Butter Rum. Heat 25g butter, two tablespoons of powdered jaggery and two cinnamon sticks, a split vanilla pod and a slice of fresh ginger in a saucepan until the butter has melted and the sugar has dissolved. Stir in 200ml rum, then serve in heat-proof glasses.