Chandrahas Choudhury is lost in the clouds

Many years ago, at 25, I gave up my first job, vowing it would also be my last. Above all, I wanted to write novels, for they were what I loved most about life. A youth spent at an office in Andheri, Mumbai was not the base, I was sure, from which I could learn enough about the world to write books good enough to earn the respect of my library.

My plans for life and livelihood as a writer were shot through with doubts and fears. But at least I was in an interesting place and in charge of my days. Over the next four years, my vision of my future self slowly became a reality. I lived frugally, ignored the advice of well-meaning elders, took heart from being rich in time if not in material things, and wrote masses of literary criticism—the one thing I knew how to do and took genuine pleasure in doing—to make a modest income. I wandered around Mumbai on bus, train and foot. And I hammered away at a story that had taken shape in my head about a small, stunted man who worked in an old cinema, loved darkness more than light, was forced to look up at the world and suspected that it looked down at him, and was nourished by a grand dream just like myself.

When, finally, Arzee The Dwarf came out in 2009 to warm reviews, I felt a glow of pleasure that more than made up for all the rough times I’d endured in writing it. More than that, I felt I had marked out a road on which I could walk the rest of my life. Many people want to be artists; I had, in my callow 20s, somehow managed the sacrifices necessary to become one. I had experienced all the raptures and ravages of artistic creation and wanted to experience them again in less destabilizing ways. Having figured out how to write a book, I felt I had the writing of books figured out.

Next! An idea I’d carried in my head for a long time was a story about a desolate young man in Mumbai of uncertain origin and destination, who, living on borrowed time, sees something of his own condition in the transient bloom of clouds. What’s more, I’d already written and published a version of it as a short story called “Clouds". The scaffolding was in place; only the building had to be raised. I sat down at my desk again and got to work.

But to no avail. From the very start, I ran into all manner of exasperating roadblocks. The new story had less narrative energy and tonal contrast than my first book. What seemed to work in the frame of a short story became laboured when transplanted on to a bigger narrative field. After a year of diligent struggle and many thousand words of inert composition, I felt I had actually gone backwards. It was as if I had never written Arzee The Dwarf.

Away from my desk, though, life was full of vivid new experiences, partly brought about by the success of Arzee. An invitation to live in the US for three months in 2010 at a writer’s residency gave me access to the delicious company and work and life strategies of more than 30 writers from around the world, from ages 25-70. With it came a concentrated experience of American English in all its vividness and energy. These were resources of great potential. But there was a still bigger problem I needed to solve before I could write another book.

Throughout my 20s, I had devoted myself to the task of becoming a writer. The only space where I had real confidence as a human being was on the page—which, to me, was a completely worthwhile trade-off. Literature, for me, was a rich experience of life—and in some measure also an escape from life. In fact, the creation in my debut novel of a protagonist who loved the cinema more than the world and trusted the dark more than light was an unconscious reflection of that truth.

Now, in my early 30s, I suddenly found myself among dozens of people whom I liked and who liked me, who shared my line of work and had no access to my past and its demons. My energies began to shift towards the work of the day rather than that of the page, to the electricity of conversation rather than composition. I began to take pleasure in the variety and surprise of human encounters—including a new encounter with myself.

Returning to India after this transporting experience, I realized how much freer I had felt when my social life was conducted in English—and that this too was a problem when it came to writing about my society. I set about trying harder to relate to people on the linguistic and conceptual ground of my two other languages, Hindi and Odia, and in cities and societies other than Mumbai. I moved to Delhi in 2011 and set up a new life in a barsati in Kalkaji. I learnt how to take pleasure in living alone, in cooking for myself and for others, in falling in love without seeking to possess someone in the ways endorsed by society or even my old self.

Even better, after being a homebody all my life, I had discovered a way to travel that worked for me. Now I rarely spent more than a week in one place. On travels around the world, I marvelled from my aeroplane window at the beautiful drifting forms around me—and, at the same time, had occasion to mourn the great distance that still lay between clouds and Clouds. 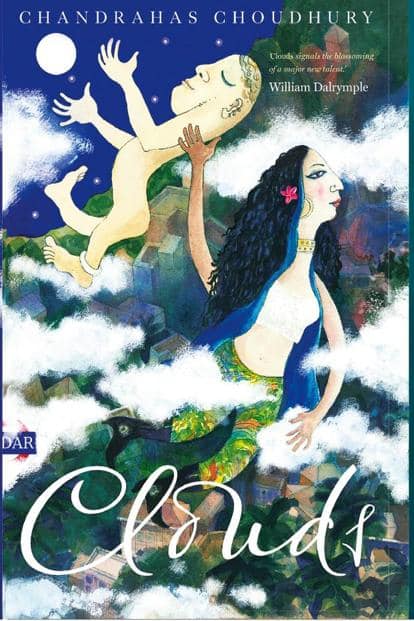 But as my life expanded, so, I found, did my sense of novelistic structure and possibility. I began to wonder: Why did Clouds have to be a story with a single, conventional narrative line? Might not that story actually become more interesting if set in counterpoint to that of a more upper-class protagonist in Mumbai, someone who also loved clouds, but who pulsed with laughter, sensual pleasure, comic perceptions about the self and the world?

Here was a new and exciting story that answered my question when I woke up every morning: Why write? Why live? Slowly, the forms opened up. Could one cloud story be focused on love and sex and the private life of human beings, the other about religion and politics and the unfolding shape of Indian history? Could the theme of clouds be related to the nature of human thought itself, which, too, drifted slowly and mysteriously in an exuberant and ceaseless superabundance in the skies of the mind?

Within the broad frame of realism, was there room for another kind of storytelling, of a plummet into the world of myth and religious ecstasy? Could I give readers a sense of the cosmopolitan and regional imagination in India—and the power and limitations of each kind of perception—in the same book, so that they could take away meanings from the story that the characters themselves couldn’t?

Going back to the drawing board in this way was full of pleasure—and one terrible moment of truth. Into the dustbin went everything I had written thus far. In fact, much of what I would write in the years to come would be discarded or rewritten too. But the days were filled once again with creative exhilaration and sparks, this time of two stories being written at the same time and drawing energy from each other.

Late in 2017, I finally had before me a Clouds I wanted the world to see. The best part of a decade had elapsed since I had started work. I had discovered that before I could write the book of which I had dreamt, I had to first allow life to write me. Perhaps this is what makes literature such a high-stakes game—one played out in slow motion within the self, like the drift of clouds across the sky.

Clouds will be available in book stores and online from 9 January.

The following is an excerpt from a chapter titled ‘The Smell Of Figs’ in Clouds, used with permission from Simon & Schuster India. At the beginning of time, there were on the Earth only the Sun, the Moon, the Stars and the Wind.

One day, in the middle of a great plain, the Wind came upon a vast swelling on the Earth’s surface—a Mountain. The Mountain was full of tilted trees and curving streams. It was enchanted with birdsong and animal cries, brooks and groves, dark and enclosed places where even the Wind could not reach.

The Wind went no further, but set Himself to moving the Mountain. Yet no matter how much He blew, blasted and bellowed, the Wind could not budge the Mountain. Rather, with every passing day, the Wind fell further and further under Her spell...

The Wind wound Himself around the Mountain for a thousand days and nights, caressing Her high and low, gently and then strongly, tickling Her by blowing on Her face and nuzzling Her crevices. Finally, She gave in, and let Him do with Her as He pleased...

Another thousand days and nights passed, and with the union of the Wind and the Mountain, a son was born. A child neither of the Earth nor the Sky, but somewhere in between. Nothing like Him had ever been seen in the universe. Neither this nor that, He was called Cloudmaker.

He was never still, and no shape He took lasted more than a few minutes. His nature was movement, like the Wind or like a song. He was always at play in this world, so beautiful to begin with and now even more so when He loped and twisted in the wide open Sky, puffing Himself up into Clouds, rolling in the whistling gusts of His father the Wind or drifting before returning to His mother the Mountain.

But Cloudmaker never knew what His limits were—in this, He was like the beings He would later create. He was both wise and foolish, generous and greedy, like man. An only child, He soon longed for a kingdom different from that of His parents, for something that was His own work...

One day, when He was not yet fully grown, He happened to bind together, into a loose figure, some stones with a paste of mud, straw, leaves and rain, and carried it around with Him within a grey, wet, nourishing Cloud. A few months later, He was astonished to see the figure had come to life. Delighted, He set His creation down to walk on the Earth as man...