Caste in the time of right-wing politics

On B.R. Ambedkar's birth anniversary, a Dalit scholar reflects on his legacy on contemporary India's democracy

More than 60 years after the adoption of the Constitution and the implementation of a constitutionally mandated reservation policy, India has reached a critical point. After coming to power in 2014, the Bharatiya Janata Party (BJP) government—taking the cue from its parent organization, the Rashtriya Swayamsevak Sangh (RSS), which aims to turn India into a Hindu Rashtra—has been promoting Brahmanical Hindu rule. Attacks against, and killings of, Muslims and Dalits, on the pretext of protecting cows, have become routine across India. From the public lynching of Mohammad Akhlaq in 2015 on suspicion of killing a cow, to the lynching of Dalit men in Una, Gujarat, for skinning a dead cow in 2016, to the killing of a Dalit youth in Timbi village, once again in Gujarat, in March for owning and riding a horse—this demonstrates the pattern of violence, reported in the mainstream media.

According to the National Crime Records Bureau, a crime is committed against Dalits every 15 minutes and six Dalit women are raped every day—a shocking majority of these go unreported. Much of this violence is committed by organized gangs and their henchmen under the guise of gau rakshaks and Hindutva organizations, which use provocative religious symbols and abusive caste language. The most disturbing aspect of the violence is the impunity with which it is committed in public and shared on social media. Some members of the ruling party have responded with insensitive remarks.

As a Dalit, watching these developments from a distance not only gives me a feeling of despair but also challenges my ethical position as a scholar of Dalit studies. It is in this context that I reflect on my journey as a first-generation educated Dalit from a small village in Telangana to provide a perspective on the diminishing prospects for Dalits, minorities and other oppressed sections of Indians. I am primarily a product of post-independent India’s reservation policy, and proof of the triumph of B.R. Ambedkar’s vision. As we celebrate another birth anniversary of Ambedkar today, it is important to reflect critically on India’s progress as a democracy, and whether it has been able to stand up to the principles of social inclusion and the guarantee of equality and dignity for its vulnerable citizens. This is pertinent not just as an exercise in nostalgia for Ambedkar, or just as an exclusive Dalit agenda, but because India’s journey as a democracy seems to be in peril.

Historically, the regressive imagination of right-wing ideology in modern times operates at two levels. Politically, it tries to capture state power and its institutions. Ideologically, the right-wing imagination is complex, but projects itself as though it believes in efficiency in all forms and neutrality at all levels. In its manifestation it thrives on demonizing people who do not fit into its imagination as lazy and parasitic, and as burdens or roadblocks to the growth and development of the larger society. Most importantly, it normalizes the privileges of the exploitative elites as natural inheritances accrued by them based on their intelligence and hard work. It twists and derides arguments so appealingly that the articulations against race-, caste-, class-, gender-, ethnicity- and religion-based oppression and deprivations appear as if lazy people are making excuses for their failures and betraying contempt for successful people. In this way, right-wing conservatism across the globe shares intellectual and cultural commonality, especially in its seeming disdain for justice, equality and equity.

Look at the world around us—from the US to India, right-wing demagogues seem to feel empowered to do and say anything. This transformation is a global phenomenon created by the rich capitalist class to increase its wealth beyond the borders of nation states. They are also covertly helping right-wing ideologies through the manipulation of technology and media, especially by trolling users on social media, to kill alternative models of development and arguments in support of equality, justice and inclusion. It is not surprising that the Hindu right wears the mask of nationalism, efficiency and honesty but serves the interests of the conservative rich elites whose interests go beyond the borders of the nation state. 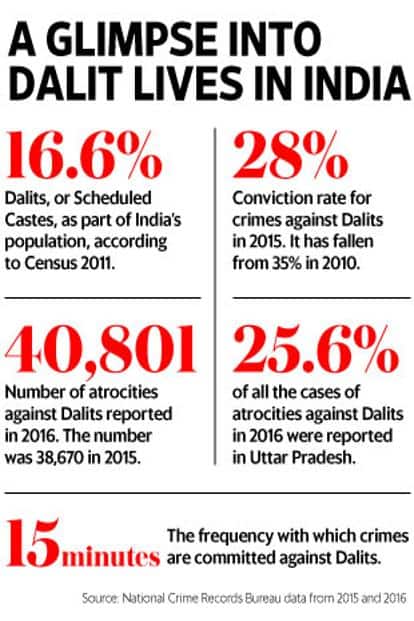 India’s success as a democratic republic is predicated on its ability to address issues of caste-based oppression and deprivation and the inclusion of minorities in the project of nation-building. National leaders like Jawaharlal Nehru, Maulana Abul Kalam Azad and Ambedkar worked to build an inclusive nation. In contrast, historically, the foundational ethics of Hinduism are based on inequality, denial of dignity and inhumanity towards the majority. Ambedkar, as a critical actor in the constituent assembly, conceived of the Constitution as an antidote to established caste-based prejudices and an outlet to escape from centuries of oppression, not just for Dalits but also for other oppressed sections of society, including caste Hindu women. He did not resign from Nehru’s cabinet as law minister on the question of Dalit interest; it was because Parliament refused to pass the Hindu Code Bill, which would have given property rights to caste Hindu women. Ambedkar ensured constitutional guarantees for the implementation of the reservation policy in education and employment for Dalits.

Even though the record in the implementation of reservation policies in educational institutions and government employment is not satisfactory, there is no doubt that reservations acted as a lifeline for Dalits. My own story attests to this fact. I was educated solely because of the government’s social welfare hostels for Dalit children that provide free boarding and other incentives. No wonder the Hindu Brahmanical imagination intrinsic to the ruling government has a natural aversion to Dalit presence in public life, especially in educational institutions. Rohith Vemula’s death at the University of Hyderabad in 2016 and several instances at other universities prove that institutional discrimination against Dalit students remains a persistent problem.

Dalit members of Parliament, from several parties, recently wrote to the finance minister, Arun Jaitley, about the pending Rs12,000 crore for over five million Scheduled Caste and Scheduled Tribe students—and the way that would affect their future in pursuing higher education. Premier institutions like the Tata Institute of Social Sciences changed their admission policy, demanding Dalit and other backward caste students pay the admission fee, which was previously covered by government scholarships. It is apt to remember that Ambedkar, and, before him, anti-caste thinkers, have shown oppression never goes uncontested—and has to end at some point. People who are at the receiving end of marginalization will ensure it has an expiration date, as Ambedkar demonstrated on 26 January 1950, the day the Constitution came into effect, marking the official end of caste, at least legally, and the recognition of equality as the cornerstone of Indian democracy.

The author teaches in the department of history, Carleton University, Canada. His book, Dalits And The Making Of Modern India, was published by the Oxford University Press in 2017.