In this upstate NY city, the jazz never died. It went to The Colored Musicians Club

Most tourists who venture to Buffalo, in upstate New York, have taken a wrong turn looking for the No.40 bus to Niagara Falls. In the US, Buffalo is a byword for two things: extreme snowfall and Rust Belt depression.

But Buffalonians are quick to defend their city, which has been undergoing a tentative Renaissance, arguing that it’s more vibrant than it is given credit for. Yet even Buffalonians will rarely recommend that you venture to the East Side. This is especially important if “you" are white, seemingly middle class, female, or any combination of the above. Buffalo, like many American cities, is segregated: one suburban enclave for the whites, another for the Hispanics, a sprawling mess of neglect for everyone else. So that warning to not venture East is not without bias. 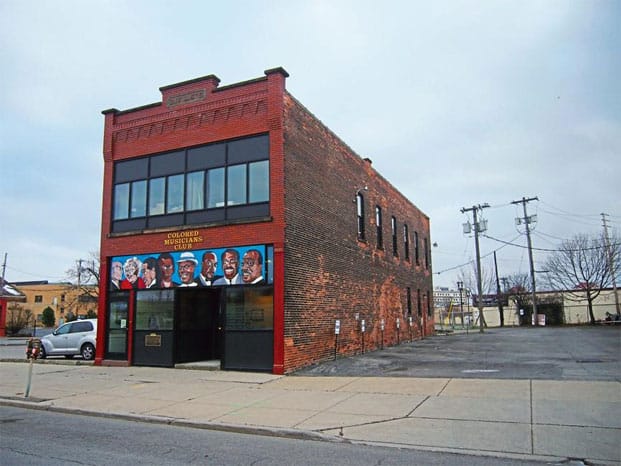 As the big band tuned up in the small, understated upstairs club, I pushed my way to the bar through rotund ladies in leopard prints and ugly-Christmas-sweatered men. The “decor" was utilitarian; black and white photographs of the legendary jazz stars who had performed at the club hung on the wall. I noticed a box sitting on the bar that contained at least a dozen chickens’ worth of battered, fried legs. If there’s one thing that Buffalo is famous for, it’s Buffalo Wings (although here, they’re just called Wings). Chicken drumsticks coated in spicy batter, served with celery sticks and blue cheese sauce. After ordering three beers for $3 (around ₹ 200) apiece—cheap even for Buffalo— I sidled up to the jovial man who had welcomed us at the door.

“Where can I get some of them?" I asked, knowing that my New Zealand accent—an oddity in these parts—would take care of things.

“You want some Wings?" he chuckled. “I’ll take care of that for you." I expected a plate with some leftovers. Fifteen minutes later, a delivery boy brought over an American-sized box of chicken, celery and blue-cheese sauce. I was impressed, and caught the friendly man’s eye. He winked. Buffalo’s moniker is “The City of Good Neighbors". Given more tourists and the opportunity, it would be “The City of Good Hosts" too. 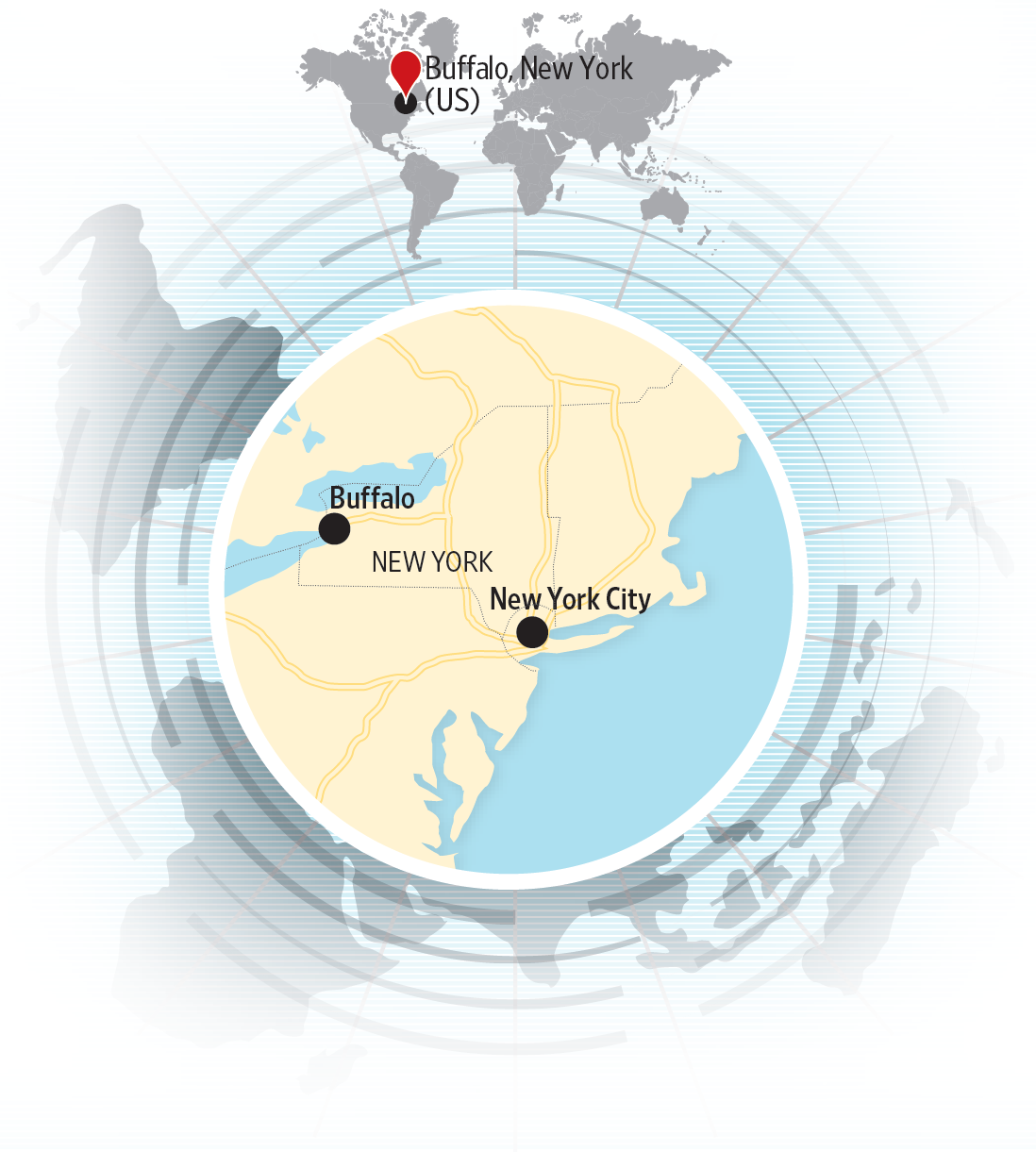 “Sorry, sorry… she was rattling away in the wind, I had to put the lock on to keep her shut," he explained, ushering me in. The friendly Wing-provider turned out to be George Scott, president of the club.

“I wasn’t sure you’d be open on a day like this," I said, relieved.

“Oh yes, Wednesday through Saturday, 11 to 4." It was the last weekend before Christmas, so I was impressed by his dedication. When I looked around the museum further, I realized why. This was not some ad-hoc, low-key homage to local history. The surprisingly colourful, interactive museum was a significant place.

A map depicts Buffalo’s place in the jazz scene of the early 20th century. New Orleans—Kansas City—Chicago—Detroit—Buffalo—Pittsburgh—Philadelphia—New York. Before it started rusting, Buffalo was a Great Lakes trade hub, conveniently situated between New York City to the south-east, Toronto to the north and Cleveland, Detroit and Chicago to the west. It was a railroad hub too, and a major stop on the “chitlin circuit", a network of performance venues across the US that were safe for black entertainers. Established in 1917, the club became very popular in the 1930s. It became a ritual for visiting black musicians—Duke Ellington, Billie Holiday, Dizzy Gillespie, Louis Armstrong—to play there. These famous musicians, as well as lesser-known local ones, are celebrated at the club and the museum. The whole area within which The Colored Musicians Club stands was once Buffalo’s “jazz corridor". Now, it is not just the only jazz venue still operating, it is the only music or night-life venue of any sort. Broadway now has more abandoned, boarded-up shopfronts than inhabited buildings.

Buffalo and its environs have long held an important place in African-American history. This region bordering Canada was part of the Underground Railroad, a 19th century network of secret routes and safe houses through which African-Americans travelled from the southern states—where slavery was lawful until 1865—through the northern states and into Canada. The city’s involvement in the civil rights movement also began early, with protests against offensive depictions of African-Americans at the 1901 Pan-American Exposition in Buffalo. While the petitions of some of Buffalo’s most respected African- American citizens were ignored, they led to the creation of the National Association for the Advancement of Colored People, in 1909.

Buffalo’s African-American population swelled in the early 20th century, the result of emancipation from slavery in the south. In 1917, African- American musicians in Buffalo formed the Local #533. Previously, there had only been one musicians’ union in Buffalo, the Local #43— it was all-white. Despite this segregation, George Scott told me proudly that the club had always been racially inclusive. Within six months of its formation, club members were allowed to bring guests of any race.

The progress of the civil rights movement in the US also, somewhat ironically, put Local #533 at risk. By the 1950s, more and more jazz bands had become racially integrated. This put the survival of African-American Locals at risk. In 1964, the American Federation of Musicians declared that in accordance with the civil rights Act, all local music clubs must desegregate. By 1969, Buffalo Locals #43 and #533 merged to become the Buffalo Musicians’ Association, or Local #92. Inevitably, perhaps, it showed a preference for white musicians.

The Colored Musicians Club’s establishment as a separate entity had been tactical, however. The property at 145, Broadway was kept legally and financially separate from the Local. When the segregated Locals were told to merge, the club was not obliged to follow suit. This meant that Buffalo’s African-American musicians continued to have a space of their own.

Through its interactive exhibits, the museum taught me the difference between Gospel and Ragtime, Blues and Boogie Woogie, Big Band and Be-Bop. When I returned to the club, I had a better idea of what I was listening to. A young female African-American singer crooned modern jazz, followed by a white teenager improvising on an electric guitar, accompanied by an African-American organist.

The musicians who perform at the club now are not all “colored" by any means. So what of its name? There is no question of changing it, despite the term being generally considered offensive and passe. Scott remarked that the name was representative of all of the African-American musicians who had made it possible for people like him to play in a mixed band, “to play here or anywhere in the country. These guys made the sacrifice, so we never want to forget them for that.

“One thing about music," said Scott. “People don’t look at colour. Jazz was an activist movement. Whites and Blacks in the same room having fun."

The Buffalo Niagara International Airport serves the cities of Buffalo and Niagara Falls, New York. Connections can be made to other US and Canadian cities. From Toronto, Buffalo is an easy 2- to 3-hour journey by train or bus.

The Hotel at The Lafayette downtown was recently renovated to its early 20th century glory after having fallen into disrepair for many decades as a men’s halfway house. For more intimate accommodation, InnBuffalo in Elmwood Village offers individual suites in an upscale 19th century mansion.

The Colored Musicians Club is now planning celebrations for its centenary, in 2017. Details of events will be announced on their website www.coloredmusician sclub.org