Bingeing on a long, strange trip

The 'Long Strange Trip' tells you nearly everything about the Grateful Dead and its fansthe Deadheads. But most of all, it tells you the story of Jerry Garcia

It was 11 August 1995. Or was it 12 August? A friend had telephoned to say that Jerry Garcia had died a couple of days ago. The call was on a landline, the only sort we had; and there was no Internet. Videsh Sanchar Nigam Ltd would introduce India’s first publicly accessible Internet service a couple of days later, on 14 August, and barely two weeks before, the first mobile audio call had been made—the then Union telecom minister, Sukh Ram, in Delhi had called up West Bengal’s chief minister Jyoti Basu in Calcutta (now Kolkata) and the two had spoken on bulky, brick-like handsets. Unlike now, Indian Deadheads like us had to depend on generosity and each other’s collection of audio-cassette recordings, copying and exchanging them to get to the music of the band we adored. News of the death of its guitarist and prime driver, Garcia, came as a blow to us, a minority tribe of diehard fans whose deep grief was incomprehensible to everyone else—friends, family and colleagues.

A few days later, the office copy of The Economist would land and I would see that publication’s tribute to Garcia—a cartoon showing his guitar, nicknamed Wolf, resting against a tree and those memorable lines from Uncle John’s Band: “Like the morning sun you come and like the wind you go." My eyes had welled up. Several weeks later, someone would pass me a copy of Rolling Stone and I would see, besides the magazine’s obituary and profiles, tribute ads by several brands. Volkswagen’s stood out—it was a sketch of the front of a VW microbus, the Deadheads’ vehicle of choice when they followed the band from gig to gig in the US, with one of the headlights shedding a tear. Earlier this month, the day Amazon Prime Video put out the new film on the band, Long Strange Trip (LST), spliced into six episodes like a TV miniseries, I watched all of them in one go and found myself reliving my emotions of August 1995.

It is probably no coincidence that at 3 hours and 59 minutes, the duration of LST is like that of a Grateful Dead show, although many of the over 2,300 concerts they played during their 30-year career (1965-95) were longer. Just like the Dead’s gigs, LST also is non-linear in structure, not following a chronological narrative but evolving from theme to theme and jumping back and forth in time. For diehard Deadheads, many of whom have encyclopaedic knowledge of the band, that’s not a problem. They know the story of the band—about how it had begun as a jug band; about Garcia’s initial obsession with the banjo and bluegrass music; the diverse musical background of each band member; about their time with Ken Kesey’s “Acid Tests"; how Pigpen was their frontman and singer in their early “blues" period; about his sad and premature death; and so on. 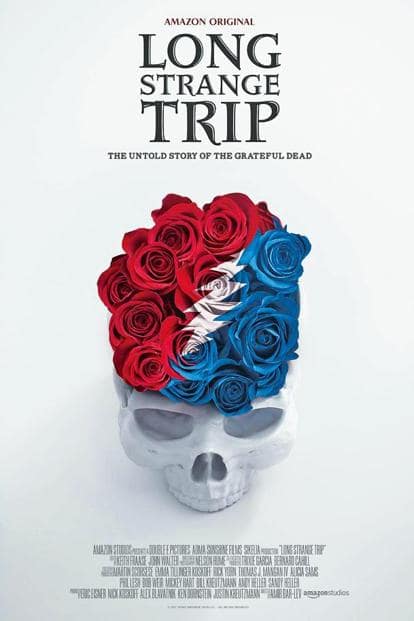 The poster for ‘Long Strange Trip’.

What makes LST riveting for a fan like me is the myriad gems that Amir Bar-Lev’s film, executive produced by Martin Scorsese, has dug up. In one funny scene, the film-maker, accompanied by Bob Weir, rhythm guitarist, singer and co-founder of the Grateful Dead, drop in unannounced to see the ultra-reclusive Robert Hunter, the Dead’s lyricist and Garcia’s long-time collaborator. The scene is brief, fleeting even, but memorable. Hunter recites the lyrics of Dark Star, one of the Dead’s ubiquitous long jam songs whose words are confounding: “Dark star crashes, pouring its light into ashes/ Reason tatters, the forces tear loose from the axis/ Searchlight casting for faults in the clouds of delusion/ Shall we go, you and I while we can/ Through the transitive nightfall of diamonds". Then, looking querulously at the camera, he asks, “What is unclear about that?" That’s all we see of Hunter in the film.

We see very little of some other key people as well. Bill Graham, impresario and driving force behind the storied venues for the band’s gigs, such as the Fillmore and Winterland Ballroom, appears in a blink-and-you’ll-miss-it moment; some of the Dead’s old members, including Tom Constanten, don’t get covered; nor does Rock Scully, a partly roguish manager of the band. Deadheads can find such grist to nitpick about, but it doesn’t really matter because Bar-Lev’s film is an endearingly satisfying watch. LST may not follow a timeline but it immerses you deep into a trip that tells you nearly everything about the band: how it began; how it grew into a truly American phenomenon of the 1970s, 1980s and part of the 1990s; how and why its fans, the Deadheads, emerged and grew as a cult—first as a happy one and then, towards the end, turning dark and dangerous.

But most of all, it tells you the story of Jerry Garcia, the band’s reluctant leader: his laissez-faire style; his deep love for playing music; and the fun he always sought. But also his tragic plunge into drugs, darkness, and eventual death. LST is a heady trip for the converted. But what of those who’re not? Garcia once said of the band: “We’re like licorice. Not everybody likes licorice. But those who like licorice really like licorice." Bar-Lev’s film has powers that could turn licorice-haters into licorice-likers. But then that’s just a licorice-lover’s view!

First Beat is a weekly column on what’s new and groovy at the intersection of music and technology. The writer tweets at @sanjoynarayan